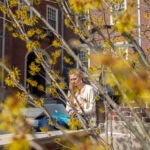 A symphony of seasons

Following the May 25 killing of George Floyd, protesters, including many in the Harvard community, took to the streets in dozens of cities across the globe. Student artists, meanwhile, looked for ways they could use their talents to contribute. A group of University undergraduates and recent grads decided to go with their strength: Host a show to raise funds for organizations promoting social justice and police reform.

“We had experience putting on shows, so we got rolling immediately,” said Freddie Shanel ’21, a member of the Harvard College Stand Up Comic Society (HCSUCS). Joining with the Signet Society, the comedy group put out a call for performers for an online variety show. A sign-up sheet filled up within hours, and the resulting Freedom Fundraiser, held on May 30, featured a score of live remote performances, raising $14,000 through its Givebutter page and Venmo account. (The event was recorded and can be viewed on Facebook). The Givebutter page also encourages direct donations to its beneficiaries: Minneapolis’s Black Visions Collective, Reclaim the Block, North Star Health Collective, and the Louisville Bail Fund.

“There’s something intrinsically creative about activism,” said Jasi Lampkin ’20, a filmmaker and one of the benefit’s organizers. Activism, she said, “is not just about shouting. It’s about creating new spaces and finding new ways to live.”

Art, added musician Hannah Lemmons ’20, meets the same definition. “Art has a way of affecting people emotionally and creating this sense of charged empathy that allows you to take action,” she said. It also encourages others. Already, the concept of the Freedom Fundraiser has spread to other colleges. The University of Michigan held an event June 4, and colleges in California, Connecticut, and Rhode Island are planning similar ones, she said.

“We want to encourage people to take action into their own hands,” said Lampkin. “Having been to an elite Ivy institution and gotten access to different tools, it’s now my responsibility to use that knowledge and use the opportunities I’ve had to help others.”

“Art has a way of affecting people emotionally and creating this sense of charged empathy that allows you to take action.”
— Hannah Lemmons ’20,

With that in mind, organizers planned their next Harvard community event, a June 14 show, Freedom Fundraiser Pride, which focused on black queer-centric organizations. There are also plans for an alumni event.

Support from multiple groups, including the Phillips Brooks House and Harvard Radio Broadcasting (WHRB), has been widespread. Harvard’s undergraduate Houses matched donations with their own fundraisers, totaling more than $30,000.

“Many of the House Committees have been working to find ways to support their community members, and to signal their ongoing commitment to creating a diverse, welcoming, and inclusive space for students to live and learn together,” read a statement from the All-House Committee co-chairs Jason Lee ’21 of Eliot and Analli Torres ’21 from Pforzheimer. “Over the past week, in consultation with their House communities, faculty, and staff, House Committees have mobilized to learn more about the causes of systemic violence and antiblack racism and commit to support calls for addressing them both in a broader social environment and within their Harvard communities.” Faculty have already met a Freedom Fundraiser challenge, raising more than $20,000 on their own Givebutter page.

Many of the College’s arts groups are looking at other ways to contribute. TEATRO!, which promotes Latinx theater and other arts, for example, is looking to strengthen its ties to the Asian Students Arts Project and BlackCAST, the Harvard black community and student theater group, Amanda Gonzalez-Piloto ’21, president of TEATRO!, said in an email. Although the group is waiting to see what actions the University takes, she said, “We encourage any writers who identify as Afrolatinx or biracial to send us an email so we can start a conversation about your work.”

The Kuumba Singers gospel choir has committed to donate $1,500 to the LGBTQ+ Freedom Fund and match donations to Act Blue up to $1,500. “It is hard to coordinate musical events over Zoom, but in the next few weeks we hope to come up with a tangible way we can show our support,” said Kaelyn Brown ’21, president of the group, which has been celebrating black creativity and spirituality since 1970. “We’re talking about planning a Harvard-wide symposium for people at Harvard to learn more about police brutality in our country.”