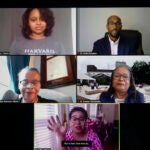 Since George Floyd died after police officer Derek Chauvin knelt on his neck for almost nine minutes on May 25, demonstrators across the country have gathered to protest police actions against African Americans. While most of the protests were calm, in several cities police officers  have used force against demonstrators and journalists under the justification of crowd control. The sight of officers in riot gear beating marchers, firing rubber bullets and chemical- or pepper-based irritants, and shoving activists has reignited questions about accepted practices in the nation’s law enforcement community.

Francesca Gino, Tandon Family Professor of Business Administration at Harvard Business School, studies leadership, the psychology of decision-making, and organizational behavior. She has written about how an organization can develop a culture that can turn harmful to its own people, to the success of its mission, and to its own reputation. In an interview, Gino discussed the circumstances surrounding Floyd’s killing, what they suggest about police culture in Minneapolis, and why it was unsurprising that the other officers on the scene didn’t stop Chauvin.

GINO:  To me, the fact that no one reacted to the horrific situation, no one decided to help or stop Chauvin is a sign that the story is about more than one bad apple. It is difficult to make generalizations, but given how the other officers reacted, they clearly showed “bad apple” behavior as well.

GAZETTE: Have you seen anything in the George Floyd incident to suggest there may be a toxic police culture at work?

GINO:  Culture is a pattern of beliefs and expectations that organization members share and that produce norms that powerfully shape how people behave. Cultural norms are expectations about appropriate behaviors; they are socially created standards that help us interpret and evaluate behavior. Through their behavior, the officers on site demonstrated that inexcusable behaviors are tolerated — whether just by them or the police more generally is difficult to say. And that makes for a toxic culture. It is every organization member’s responsibility, in their own leadership and work, to cultivate an effective culture.

GAZETTE: One of the chilling aspects of this incident is that three police officers stood by casually or assisted Chauvin while he pinned Floyd down until he died. What is at work psychologically when otherwise responsible people do bad things or allow bad things to happen? Why don’t people speak up more often when they see wrongdoing?

GINO:  One of the sad phenomena psychologists have studied for years now is the bystander effect. Basically, the research addresses the following question: Why is it that we look away even when atrocities are happening around us? One famous example that is often mentioned is the murder of a 28-year-old woman, Kitty Genovese, outside her apartment in the Queens neighborhood of Kew Gardens in the early morning of March 13, 1964. This case raised so many important questions: How could the neighbors look on and turn away as she was stabbed repeatedly on the street and in her apartment building? What did nobody act in a way that could be helpful? What did that collective inability to act reveal about us as human beings, our communities, and our belief systems?

This is not a story in isolation. Though the details of every story are different, and each of them is quite tragic in its own way, they also point to the bystander effect: We continue to look away in the face of danger.

The initial research was conducted by social psychologists John Darley and Bibb Latané. They wanted to show why the witnesses to Genovese’s murder, a case both followed avidly, behaved with such apathy, and whether they could quantify a minimum number of people present to create collective indecision. Their research found that the more people who witness a catastrophic event, the less likely any one person will do anything because each thinks someone else will take responsibility. Experiments that other researchers conducted in the years that followed suggest that in a crisis, pointing at a bystander and giving her directions to ask help or complete a task can override the robust bystander effect. Action over apathy is the greater struggle and more difficult choice, but it can prevail.

This research, I think, gets to [this] question. The three officers who stood by as officer Derek Chauvin held down George Floyd until he died may have been bystanders. But it is also possible, even in a situation as tragic and horrific as this one, that the inexcusable and immoral behavior of Chauvin became contagious. As I found in my own research, the unethical behavior of a bad apple can, in fact, become contagious. In one study, for instance, we found that when a confederate (a student with acting skills we hired for the study) cheated ostentatiously by finishing a task impossibly quickly and leaving the room with the maximum reward, participants’ level of unethical behavior increased when the confederate was an in-group member (a student just like them), but decreased when the confederate was an out-group member.

Why don’t people speak up more often when they see wrongdoing? There is a lot of research in management on why people do not speak up. One reason is the significant perceived risk of doing so. As I wrote recently, challenging the status quo threatens people’s status and relationships with supervisors and coworkers, research shows. Speaking up in organizations can also result in negative performance evaluation, undesirable job assignments, or even termination. Most people are aware of these potential costs; as a result, most stay quiet about bias, injustice, and mistreatment.

GAZETTE: Who or what causes an organization’s culture to become toxic?

GINO:  When there’s a toxic culture in an organization, every leader who contributed to using behaviors that are not consistent with the values the organization stands for is to blame. As I always say to executives when teaching about culture, culture is inevitable. A culture will form in any organization. The question is whether it is one that helps or hinders the leaders’ ability to execute their strategy, stay scrappy, and be successful over the long run, however they define success.

GAZETTE: What harm does a toxic culture do?

GINO:  Toxic cultures and workplaces, research finds, cause anxiety, stress, health problems, absenteeism, job burnout, counterproductive work behavior, and ultimately degrade productivity and increase turnover. For effective cultures to produce the effects they are intended to have, everyone has to uphold the culture even when it’s hard, it is not absolutely necessary, and no one is looking.

GAZETTE: The Minneapolis police chief said he has been working to reform department culture, but has faced strong opposition from the police union. What can be done to root out a toxic culture once it has infiltrated an organization?

GINO:  Cultural transformation is possible. It starts with leaders first acknowledging the issues that are present that need to disappear and define how they negatively impact the workplace, and then identifying values to live by and behaviors that are consistent with those values. But it takes discipline. Culture works when it is consistent, coherent, and comprehensive. It is key for leaders to be consistent in communicating and reinforcing the values, and to have a clear vision in everything they do. Those who are aligned will stay while those who are misaligned will filter themselves out or should in fact be fired. Leaders are the ones who set the example and the tone of the organization’s culture through what they allow and what they model. Their actions must match their message. The values and behaviors identified need to be coherent with the strategic goals the organizations have and they need to be comprehensive.