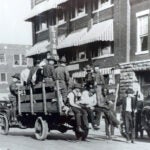 House Majority Whip James Clyburn, the highest-ranking African American in Congress, brought a unique perspective to Harvard for Juneteenth. Speaking with Kennedy School Professor Cornell Brooks via Zoom on Thursday evening, Clyburn said that, for him, the day is about communication.

“I spent my early adult life in Charleston, S.C., an important city to the Black experience,” Clyburn said. “More than half the Americans who were enslaved in this country came through the port of Charleston. So before it became Juneteenth we celebrated Emancipation Day, with a bigger parade than on Christmas.”

Juneteenth celebrates the arrival of Union Army liberators in Galveston, Texas, two years after President Abraham Lincoln signed the Emancipation Proclamation. “That shows the value of communication. Texas was one of those states where nobody had communicated with the slaves, to let them know they were free. And that’s what I think about today: Are we communicating with each other?”

Brooks often played devil’s advocate during the interview, and asked Clyburn whether given the current state of institutionalized racism, the Black community has truly attained freedom. “We are still in pursuit, that is quite true,” Clyburn replied. “When you look back at the Civil War, I am amazed at the number of people I meet who don’t know that more than 100,000 slaves fought for their own freedom. And when you look through history at all that’s happened — through Jim Crow and the Civil Rights Movement of the ’60s — there is a problem of communicating even today.”

Brooks compared the viral video of George Floyd’s killing to the infamous casket photo of Emmett Till, a 14-year-old African American who was beaten unrecognizable and lynched in 1955 after being accused of flirting with a married white woman. Brooks said both were horrific images that galvanized the African American community.

“The Emmett Till photograph is what turned my youngest daughter around,” Clyburn said. “I’d been showing her all kinds of things, trying to make her focus on a purpose. Finally we watched [the documentary series] ‘Eyes on the Prize’ and when they showed that coffin, it changed her.” Clyburn said that he was aiming for similar impact when he circulated a 2015 photo of Walter Scott, an unarmed Black man who was shot and killed by a white policeman in South Carolina, and compared that with the arrest of white supremacist mass murderer Dylann Roof, who was taken into custody civilly and allowed to go to Burger King.

“I think about the creation of the atomic bomb,” Clyburn said. “Energy was floating around all the time, then scientists figured out how to harness it. Now there is energy around the movement, and we need to harness that so it can explode on Election Day.”

Responding to audience questions fielded by moderator Devon Crawford, staff director of the William Monroe Trotter Collaborative for Social Justice, Clyburn detailed reform efforts he is currently spearheading. One is a bill for police reform, including a ban on chokeholds, which is now being discussed in Washington. Another is a bid to bring broadband into every home in America. This, he said, is especially crucial at a time when African American communities have been hit disproportionately by COVID-19.

“Our students have just lost half a year of learning, and many are not going to get to go online. We have to make sure we equip them. We also need to define essential workers for what they are — not just doctors and nurses, but aides, custodians, drugstore clerks.”

Clyburn also shared a bit of personal and political history. As a student at the South Carolina State College, he was part of the historic anti-segregation protests of 1960. He said these were not as spontaneous as history remembers: The Greensboro sit-ins at a segregated Woolworth’s counter were planned in the fall, but delayed until Feb. 1 so students wouldn’t be leaving for vacation.

Clyburn was arrested later that spring when he organized a nonviolent protest in which thousands of students marched. While in jail, he was grateful when a female student brought him dinner — so grateful, he said, that he married her soon after. For years he thought it was a lucky chance meeting, but later he learned that some fellow students, including Brooks’ mother, had plotted to bring them together. Said Brooks, “It shows how smart your wife was, and how gullible you are.”