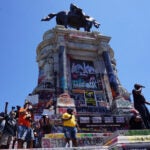 Ninety-nine years after a mob of poor white people killed 150 to 300 African Americans and destroyed the “Black Wall Street” in Tulsa, Okla., the city again made headlines when President Trump announced he would kick off his re-election campaign there on Juneteenth — the day that marks the final end of slavery in the U.S.

Although the rally was subsequently rescheduled for Saturday, Trump’s actions brought renewed attention to the 1921 massacre in Tulsa’s Greenwood District, a tragedy that generally has been overlooked in American history classes. This oversight, said participants in a Weatherhead Initiative on Global History webinar on Thursday, is emblematic of — and continues to contribute to — America’s racial divide.

“It’s difficult to have real dialogue about anything to do with race when we don’t have an accurate depiction of history,” said New Orleans Saints safety and Weatherhead visiting fellow Malcolm Jenkins, who introduced “A Conversation on Tulsa and the Long History of Dispossession of African Americans: What We Don’t Know.” Jenkins, who moderated the talk with Tulsa-raised journalist Caleb J. Gayle, M.B.A./M.P.P. ’19, and Khary Darlington, a writer, public speaker, and former scout for the Carolina Panthers, is developing a documentary film project on the massacre.

Jenkins opened the discussion by sharing that he had not heard of the Tulsa massacre until he was in his 20s. Although Gayle grew up in Tulsa, he too only learned about it as a young adult. Returning from college, he recalled being struck by the newly built John Hope Franklin Reconciliation Park, which commemorates the riot. “It became clear to me that so many others around me had no idea what had happened here,” he said, “not just the devastation that occurred, but the lives that were led.” Without understanding that, he asked, “how could we fast-forward to reconciliation?”

The discussion that followed explored that history. Nathan Nunn, the Frederic E. Abbe Professor of Economics, detailed the persistent health and economic effects of the tragedy, which destroyed an entire Black community. Elizabeth Hinton, the John L. Loeb Associate Professor of the Social Sciences in the Department of African and African American studies, looked at the role of the police in the massacre. Noting “the line of dispossession-policing interplay we can trace back to slavery,” she brought up the police obligation to protect property and “maintain social control over racially marginalized communities.”

Such tragedies are ongoing, said Heather Ann Thompson, Collegiate Professor of History and African American Studies at the University of Michigan. Citing riots from the destruction of Rosewood in Levy County, Fla., in 1923 up through the razing of two city blocks in Philadelphia in 1985, she said, “There is a deep and long history of events like Tulsa.”

Smashing communities and burying their histories erases stories of Black success and possibility, the panelists said. Following the Tulsa Race Massacre, Darlington said, “It became acceptable to believe that African Americans couldn’t reach the same heights as our [white] counterparts could. There’s a narrative within the Black community that there’s not room for all of us” to succeed.

“There’s no way forward until and unless we truly reckon with all of this history.”
— David J. Harris, managing director of Harvard Law School’s Charles Hamilton Houston Institute for Race & Justice

The panelists said these myths need to be countered by regaining control of the narrative. Tulsa attorney Damario Solomon-Simmons, a leader in the drive for reparations, said, “So much of the history of Greenwood has been told by those who perpetrated the harm.”

Addressing “the disinvestment and what we’ve done to our cities,” David J. Harris, managing director of Harvard Law School’s Charles Hamilton Houston Institute for Race & Justice, which cosponsored the webinar, pointed out the ongoing repercussions. Most recently, he said, “COVID-19 has revealed how these disparities have caused great harm.”

“We can never let up,” said Harris. “There’s no way forward until and unless we truly reckon with all of this history.”

Jenkins’s own history, which includes two Super Bowl rings, provided a link to the second part of the forum, a discussion of the role of Black athletes. Citing the incredible impact of social media, Denise Kwok, Director of USC Student-Athlete Academic Services, said, “In both professional and college athletics you hear some of the most prominent voices of African Americans.” As athletes use their prominence to speak out, they increase the potential for real change, she said. “They occupy hero roles.”

But while multiple speakers pointed out advances such as the NFL coming out in support of Black Lives Matter, others worried that the gains are cosmetic. Ray Farmer, former general manager for the Cleveland Browns, said the dearth of Black team owners in the NFL helps determine representation in coaching and management. He said the number of Black general managers has decreased since 2014, and, “Those are the people who make those decisions.”

Many speakers also referenced the current crises of police brutality and the racial disparities in health care revealed by the novel coronavirus. Jenkins, however, said he believes they may have opened a way forward. “Oddly, this pandemic has made all of us sit still and pay attention to what’s going on,” he said. “We have to sit in this moment and recognize truth.

“Now that the whole country is on fire,” he said, “everyone is getting involved.”