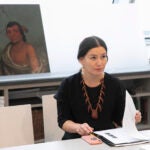 More than 60 years after its Broadway debut, “West Side Story” remains a touchstone of modern American theater. A new Harvard-Radcliffe Dramatic Club production opening this week at Farkas Hall is confronting the cultural missteps associated with the classic musical, turning an ambitious theatrical project into a complex educational experience for cast and crew.

When the artistic team began planning the show, members focused on addressing chronic issues of Latinx representation in casting, a flaw illustrated early on by the Oscar-winning 1961 film adaptation in which the vast majority of Puerto Rican characters were played by white actors, such as Natalie Wood as the female lead, Maria. They also wanted to find a way to reckon with the real and underdeveloped histories of Latinx life in New York in the late 1950s, beyond the show’s stereotypical portrayals.

“‘West Side Story’ has left a big cultural footprint, so there is value in reclaiming the story and depicting it as accurately as possible,” said technical producer Amanda Gonzalez-Piloto ’21, noting that the script for the HRDC production cannot be changed due to copyright restrictions. “We’re working within a limited framework, so we have been asking: What can we do to make a more accurate and respectful cultural representation and also acknowledge there are some seeds of truth in this very flawed creative masterpiece?”

Gonzalez-Piloto, a joint concentrator in Theater, Dance & Media and music, is also president of TEATRO!, one of the groups presenting the production, along with La Organización de Puertorriqueños en Harvard (La O). She said that facing the show’s difficult past was crucial to the production process. To create a foundation of understanding and knowledge among the cast and crew, she worked with students at La O and Diversity Peer Educators to hold multiple cultural conversations with the cast and staff, on topics including the historic and current poor treatment of Puerto Ricans in the U.S. and the development of Latinx and latinidad identity categories.

The goal was to critique the language of the script and learn more about the history and culture behind the characters through a distinctly Latinx lens, rather than from the show’s original creators, who were white men.

“Even though ‘West Side Story’ was not written by Latinos, and there are many problematic choices in the text and the movie, including brownface and the stereotyping of Puerto Rican people, there is still a lot of resonance in the text for modern Latinx people around issues like immigration, colorism, belonging, and assimilation,” she said, adding that the musical, with a book by Arthur Laurents, music by Leonard Bernstein, and lyrics by Stephen Sondheim, also depicts poverty and police violence in ways that may feel familiar for contemporary audiences.

With guidance from actor, director, and OFA guest artist Adriana Colón ’12, the team reimagined the Sharks without the stereotypical accents and mannerisms present in earlier productions of the show, focusing instead on depicting a diversity of Latinx identity and experiences. They also tried to be more intentional in wardrobe selection as both groups of combatants emerged from the same lower-income strata.

“We wanted to open up a conversation with the Harvard community and beyond, to show how a story that is dated can resonate with us today,” said technical producer Isabelle Liao ’21, who is concentrating in history and literature.

Interestingly “West Side Story,” a retelling of Shakespeare’s “Romeo and Juliet,” was praised by critics when it opened in 1957 for its realism and for taking audiences into a world of gang violence and poverty that finds “odd bits of beauty amid the rubbish of the streets,” according to Brooks Atkinson in The New York Times.

At the same time that the artistic team worked to educate the participants about the painful history they were recreating, they also saw another learning opportunity for the actors cast as the Jets, an all-white gang, and the neighborhood police officers. These characters deliver most of the musical’s racist lines, and the actors, many of whom are first-years or first-time Harvard performers, were concerned about how they would be perceived by audiences. For these actors, Gonzalez-Piloto, Liao, and stage director Aviva Ramirez ’22 held more conversations about the importance of playing a difficult role in service of a larger cultural shift in theater.

“These are stories with problematic characters, but someone has to play the problematic role. It’s important to get the full story, to avoid historical revisionism or cleaning up a past that is violent and hateful and complicated,” said Gonzalez-Piloto.

Ramirez also wanted to highlight the youth of the characters, and saw her casting of two first-years as Tony and Maria as an advantage in accurately representing their teenage characters’ struggles against the adult violence and community pressures that inform their decisions and limit their choices.

“Most of the characters in ‘West Side Story’ are high-school age, and we have an opportunity to depict them closer to their real ages,” said Ramirez, who is concentrating in the history of art and architecture. In professional productions, she added, the actors are rarely so close in age and experience to the characters, which “can really ruin the effect of many of the most poignant parts of the show.”

“I’m trying to show the community and the reality of the lives of the kids rather than the flashy and dramatic gang violence and racial violence,” she said. In so doing, she hopes to infuse the feeling of hope into the performance that Tony and Maria feel for their future.

“What can we do to make a more accurate and respectful cultural representation and also acknowledge there are some seeds of truth in this very flawed creative masterpiece?”
— Technical producer Amanda Gonzalez-Piloto ’21

“It’s important to keep in mind that it’s a serious story and we have such a responsibility to do all these topics justice, but also to remember that we’re a College show, and we’re here for community ourselves. It’s important to stay optimistic.”

With an upcoming revival on Broadway premiering in December and a film remake slated for release in 2020, “West Side Story” will stay relevant for years to come. (Director Steven Spielberg took pains to avoid whitewashing the cast in the upcoming movie.) And as the story is presented to new audiences, the organizers of the HRDC production hope that viewers will see past the dated references to the universal appeals for acceptance and understanding underlying the tragic story.

“‘West Side Story’ is painfully relevant to the question of what it means to be American right now,” said Ramirez, who also directed the 2019 first-year musical “Cruising Altitude.” “It opens up this incredibly important conversation about the cycle of immigration, in which immigrant groups come to America and face discrimination, wishing someone had empathy for them, and then having their kids assimilate and not show that empathy for the next immigrant group. For me, that’s the absolute core of what ‘West Side Story’ is about.” 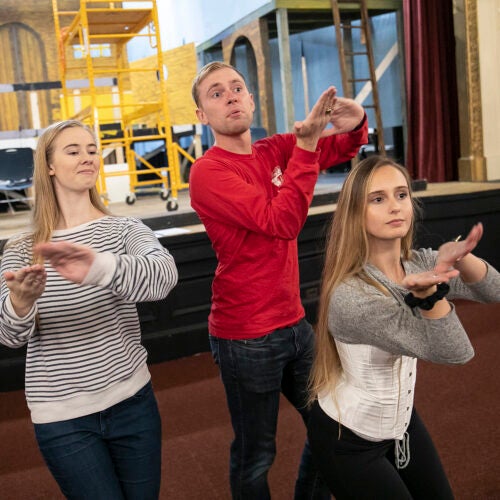 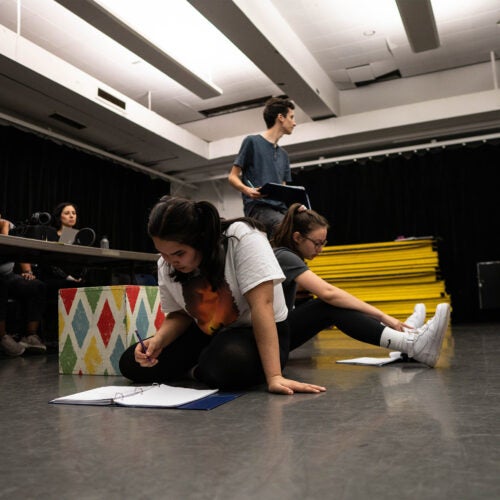