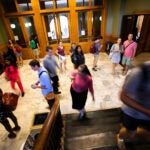 Centennial celebration of the storied group queued up for this weekend

This is a big week for the Harvard University Band. Bigger, even, than its legendary bass drum, Bertha, or its 7-foot-tall, triple-B-flat Besson tuba. And more legit than its honored, if mock, Latin motto: Illegitimum non carborundum, or “Don’t let the … [um, expletive deleted] get you down.” That’s because this weekend the band celebrates its 100th year.

To mark the anniversary, the band that takes the field during halftime of the football game with Cornell on Saturday may swell to more than 400 performers as a number of alumni — or “crusties,” in band parlance — will join student members to play traditional fight songs such as “10,000 Men of Harvard” (composed by A. Putnam ’18), “Fair Harvard” (Samuel Gilman 1811), and contemporary tunes as well.

“The friends you make in band are the friends you keep with you and stay in contact with,” said flutist Jessica Bishai ’20, the band’s 100th-reunion manager. “That’s something I’ve witnessed, talking with alumni.”

Although band reunions take place every five years, as many as 500 alumni are expected this year, according to Mark Olson, director and faculty adviser since 2013. Festivities will include a Friday evening of performances by the Harvard University Band, the Wind Ensemble, and Jazz Band. The Sanders Theatre event, which will be webcast, will feature the newly restored Besson tuba in a commissioned work by Lewis J. Buckley, “Caprice for Great Big Tuba,” to be played by Boston Symphony Orchestra principal tubist Mike Roylance. (The restoration, made possible by a gift from the late Marlowe A. Sigal ’52, M.B.A. ’54, has been a years-long project for Michael Ruderman ’81, the Harvard Band Foundation’s clerk and, like Sigal, a clarinetist.)

This robust showing both on and off the field is testament to a band tenet: Once a member of the Harvard University Band, always a member. The student-run organization is famously welcoming, offering lessons and instruments to those interested, and nonplaying crew positions to potential “bandies” who want to join the fun but lack musical proficiency.

“There’s a place for everybody,” said Olson.

“If you feel as though you want to help spread joy with music or take part in other ways we try to spread joy, you are welcome,” added Lucaian Al-Tariq ’20, the band’s student manager, who switched from clarinet and bass clarinet to mellophone while part of the group.

The band plays each year at Commencement and other University events, including the First-Year Convocation. At the heart of its calendar, however, are the performances at football and hockey games. Although attendance at every game is not required, 40‒50 of the 120 or so members show up for games, with as many as 70 taking the field when Yale comes to town.

Alumni are always welcome to join in, Bishai said. For the reunion, that will mean up to 35 trumpet players and 13 trombonists on the field, added Cammie Wynn ’94, president of the band foundation. Wynn, who will be joining that trumpet section, expects that almost all of the attending alumni who can still play will show for the pregame rehearsal — and then march. “Being out there on the field is going to be just really exhilarating,” she said.

Part of that experience will, of course, be the half-time show, a reliably humorous mix of politics, current events, and insider band jokes, all with musical punchlines. “We are planning to have a show that ties into the history of the band,” said Al-Tariq of the student-written script. It will celebrate the former longtime band directors Tom Everett and Leroy Anderson ’29. “We’ll also bring in a little more humorous component, such as the time our bass drum was stolen by Yale,” Al-Tariq said.

Indeed, Bertha, now in her third incarnation, has long been considered the band’s mascot — and subject of pranks. The Besson tuba, however, will not take the field. In fact, says Ruderman, the giant brass was never intended as a permanent band fixture. Built as display for a trade exposition held in conjunction with the Paris World’s Fair of 1889, it was in the window of Carl Fischer Music’s Boston store in 1948, when it was sold to the band — inadvertently, or so the story goes. “The Harvard Band was engaged to play in a benefit concert at Symphony Hall for the Radcliffe 70th Anniversary Fund, and someone said, ‘We want to rent this,’” said Ruderman. “They said ‘Fine,’ except that instead of ticking off the box that said ‘rental,’ the clerk checked the box that says ‘sale.’”

Although that paperwork, which Ruderman said was long on display, is now lost, it still serves as an example of the band’s rich lore. Plus, it makes a great tale to pass along, as it will be this reunion and every other one going forward.

“The most fun part of my job is talking with different crusties and hearing how band was for them,” said Bishai. “It reminds me of why I love the band.” 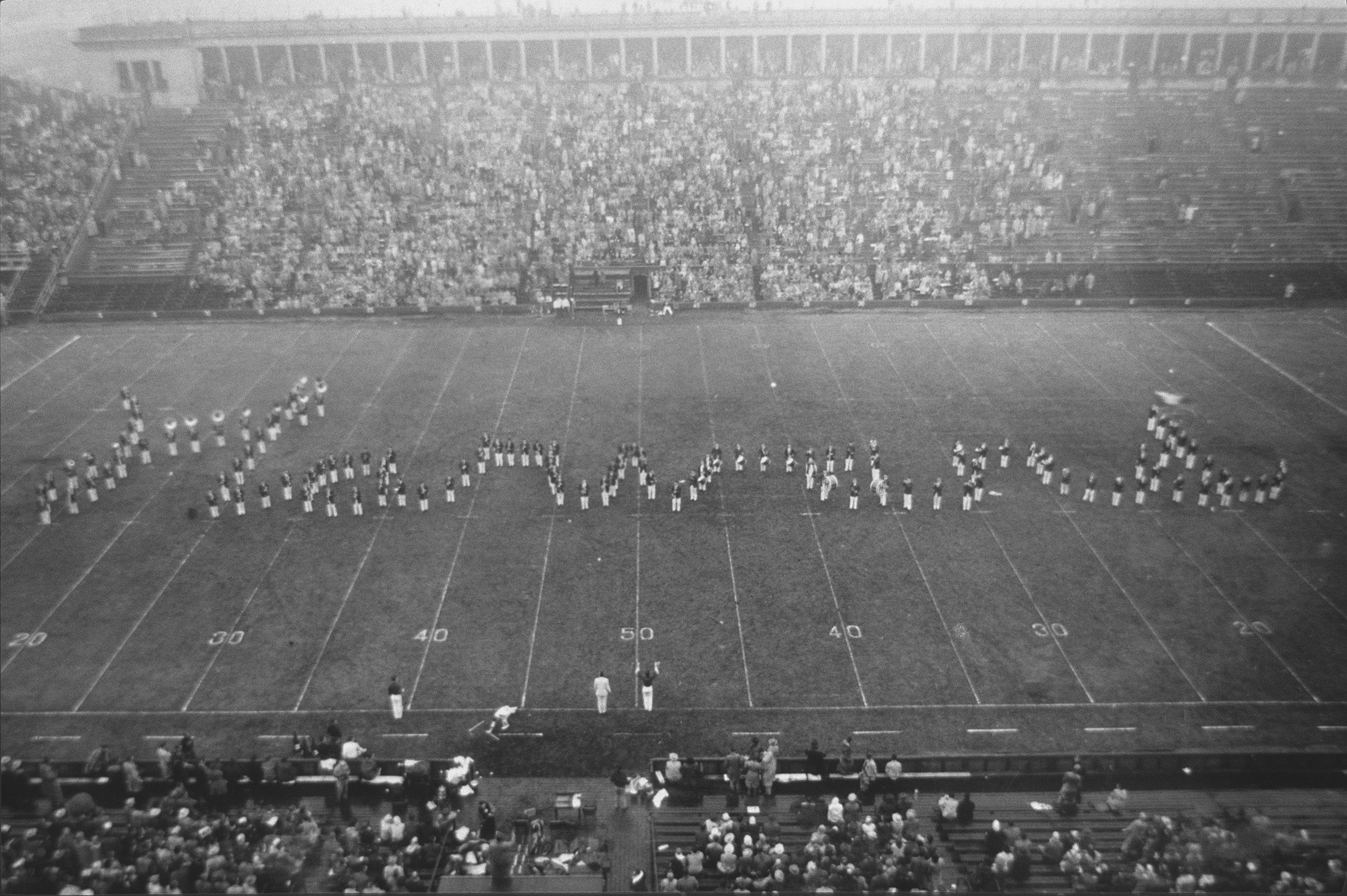 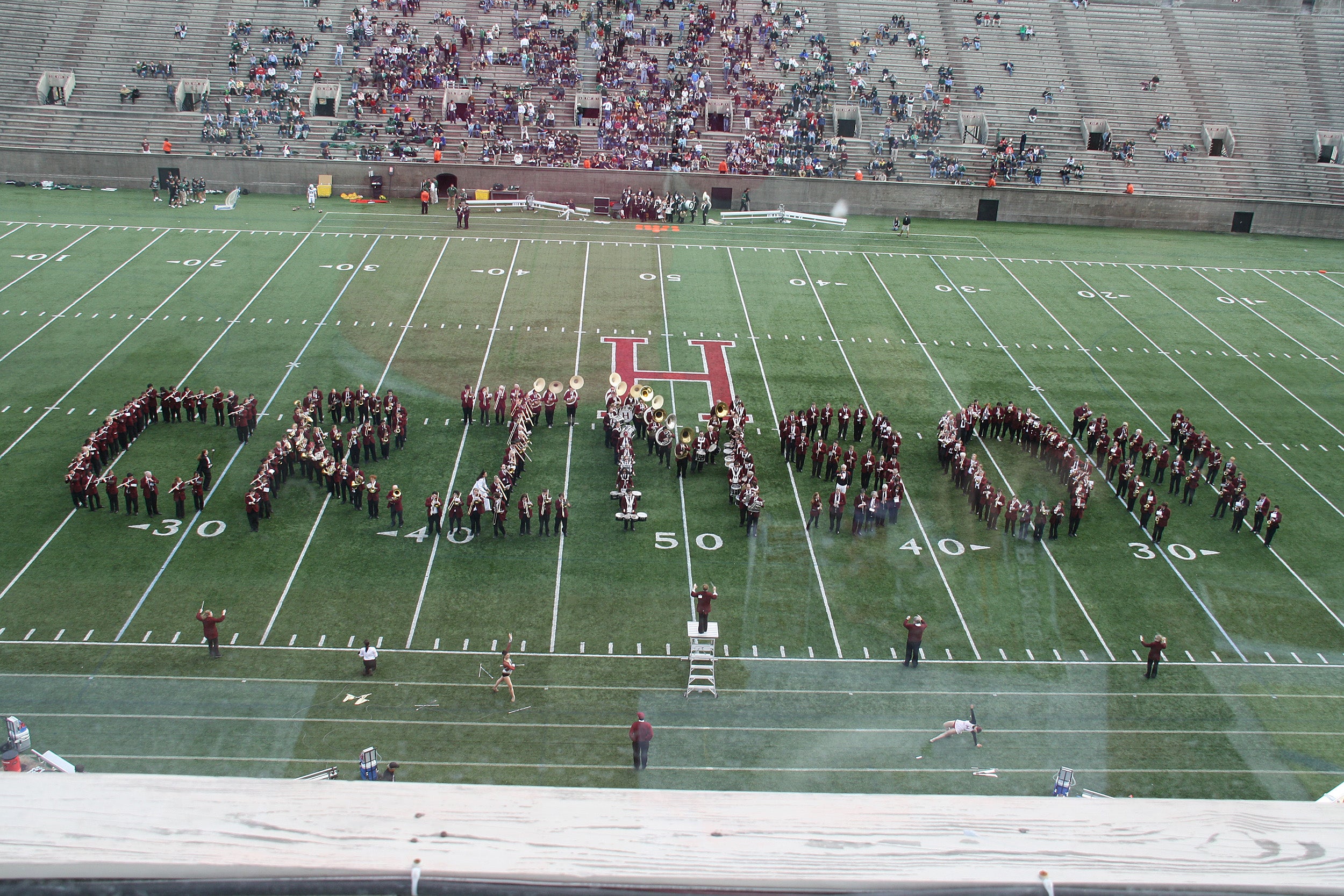 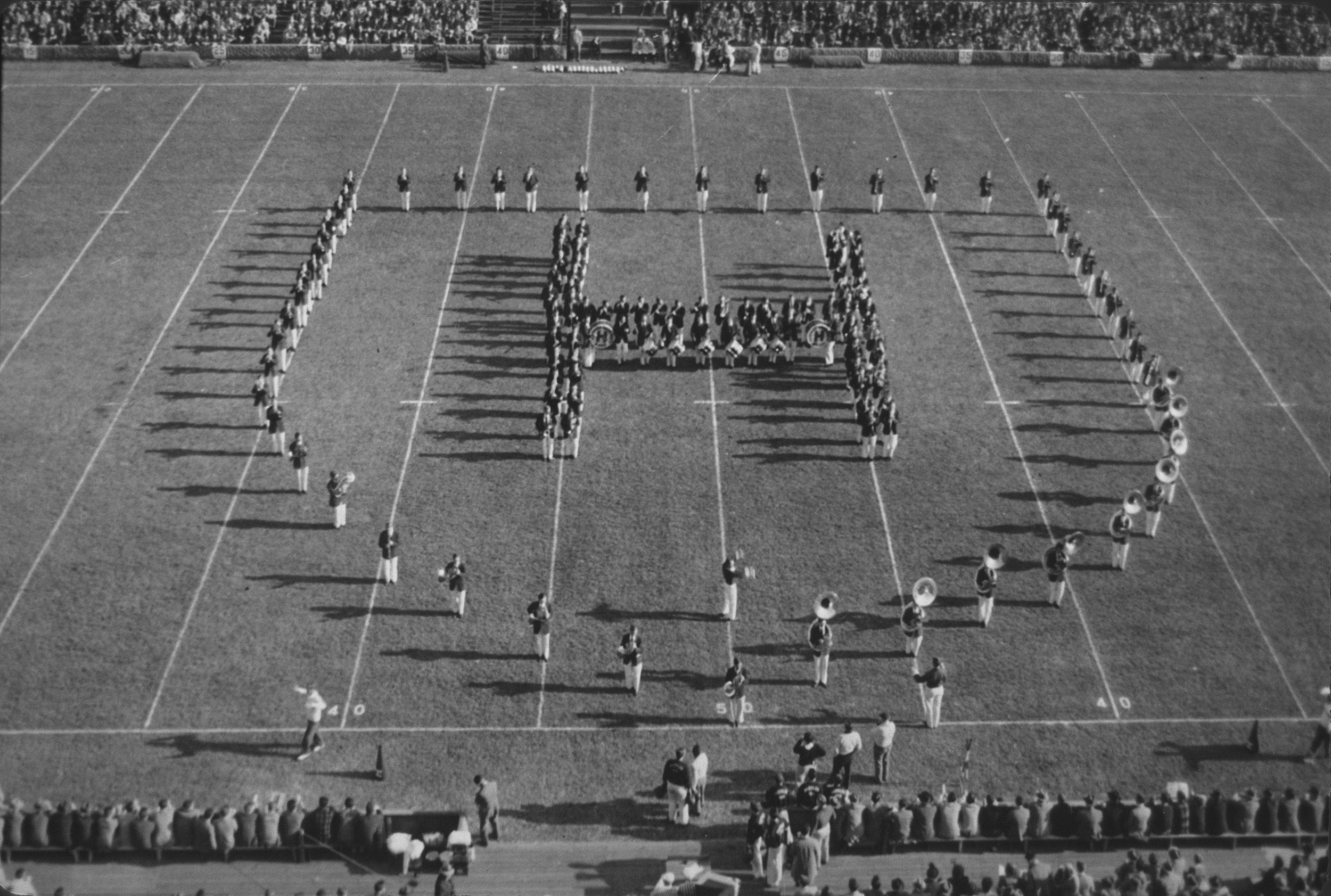 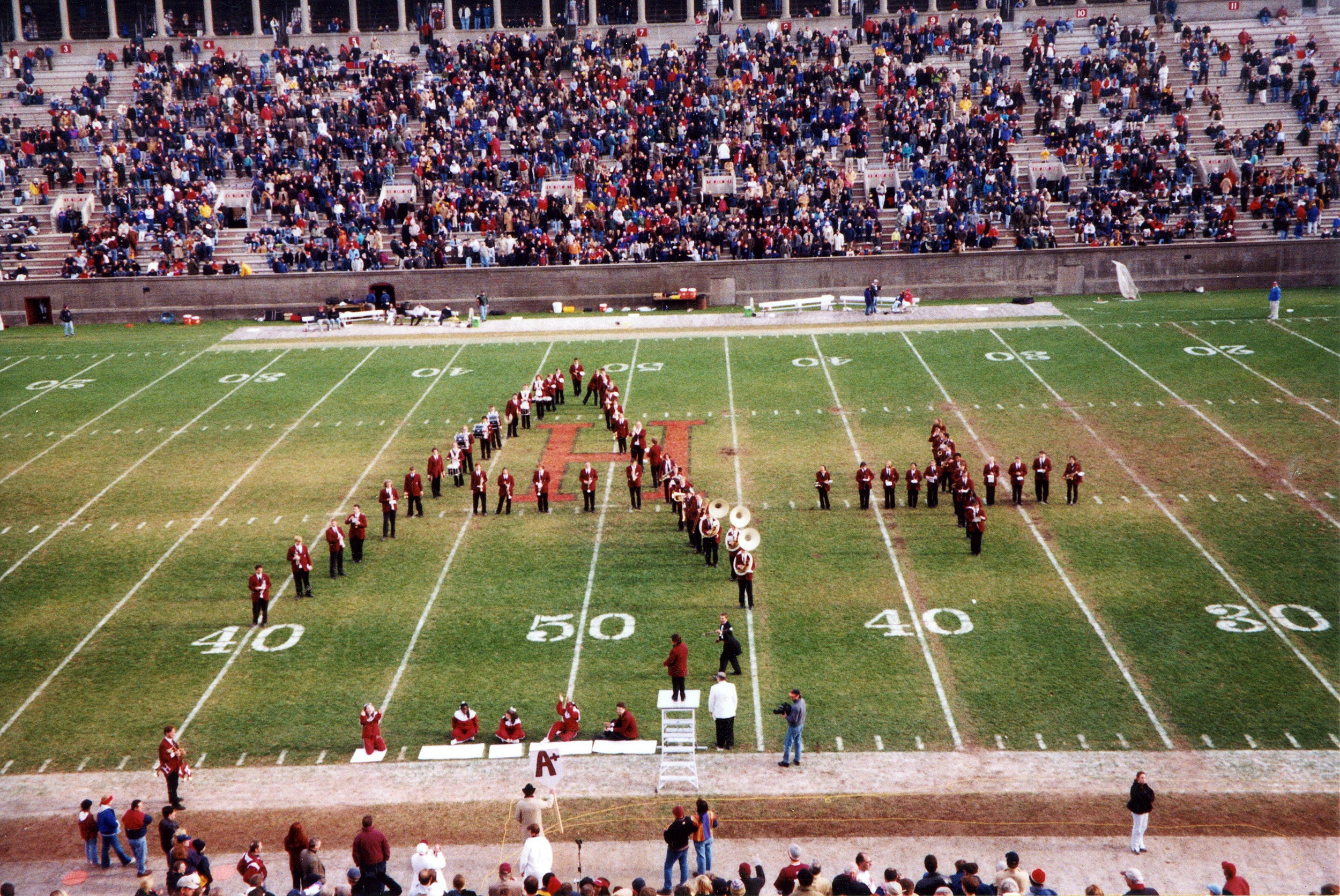 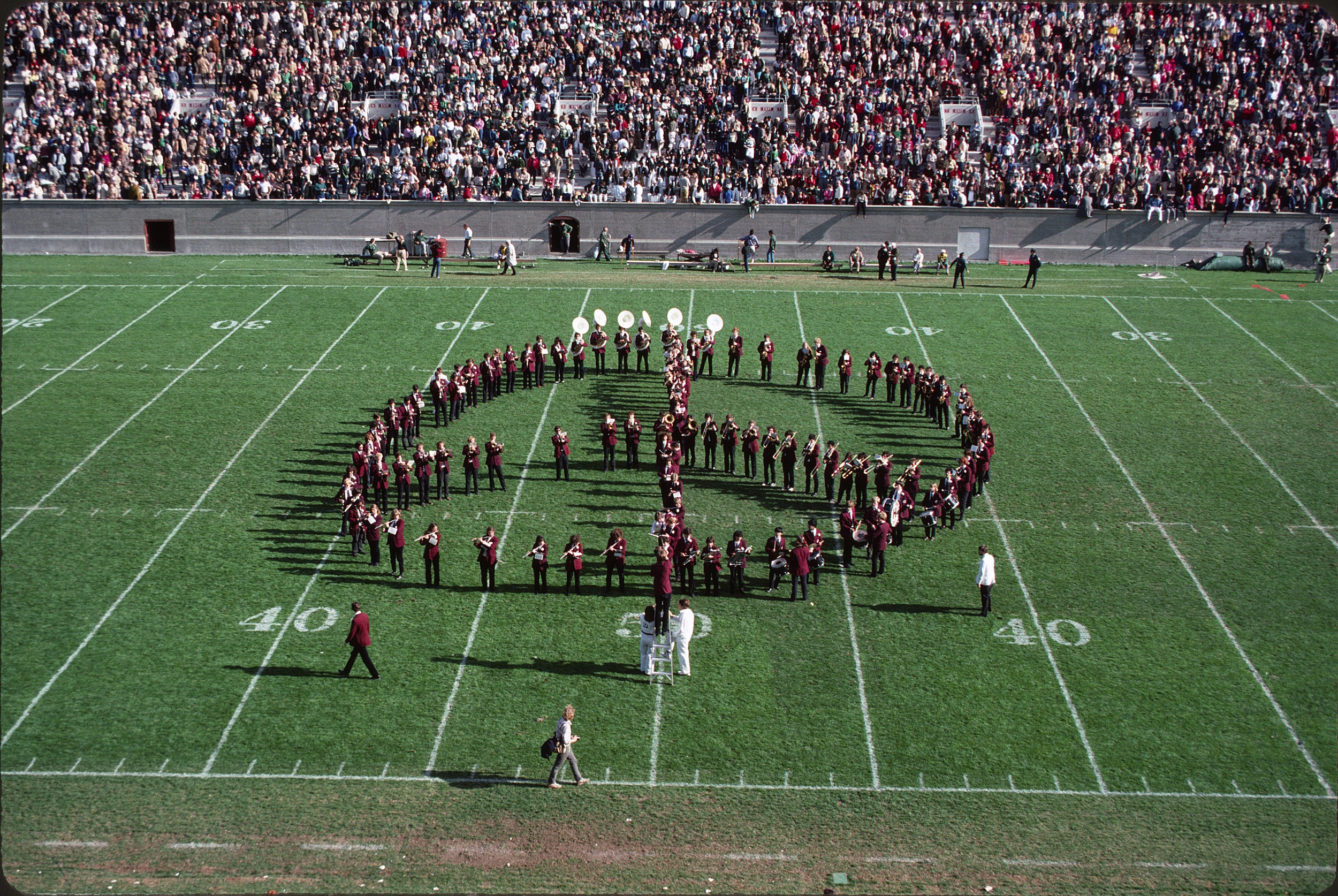 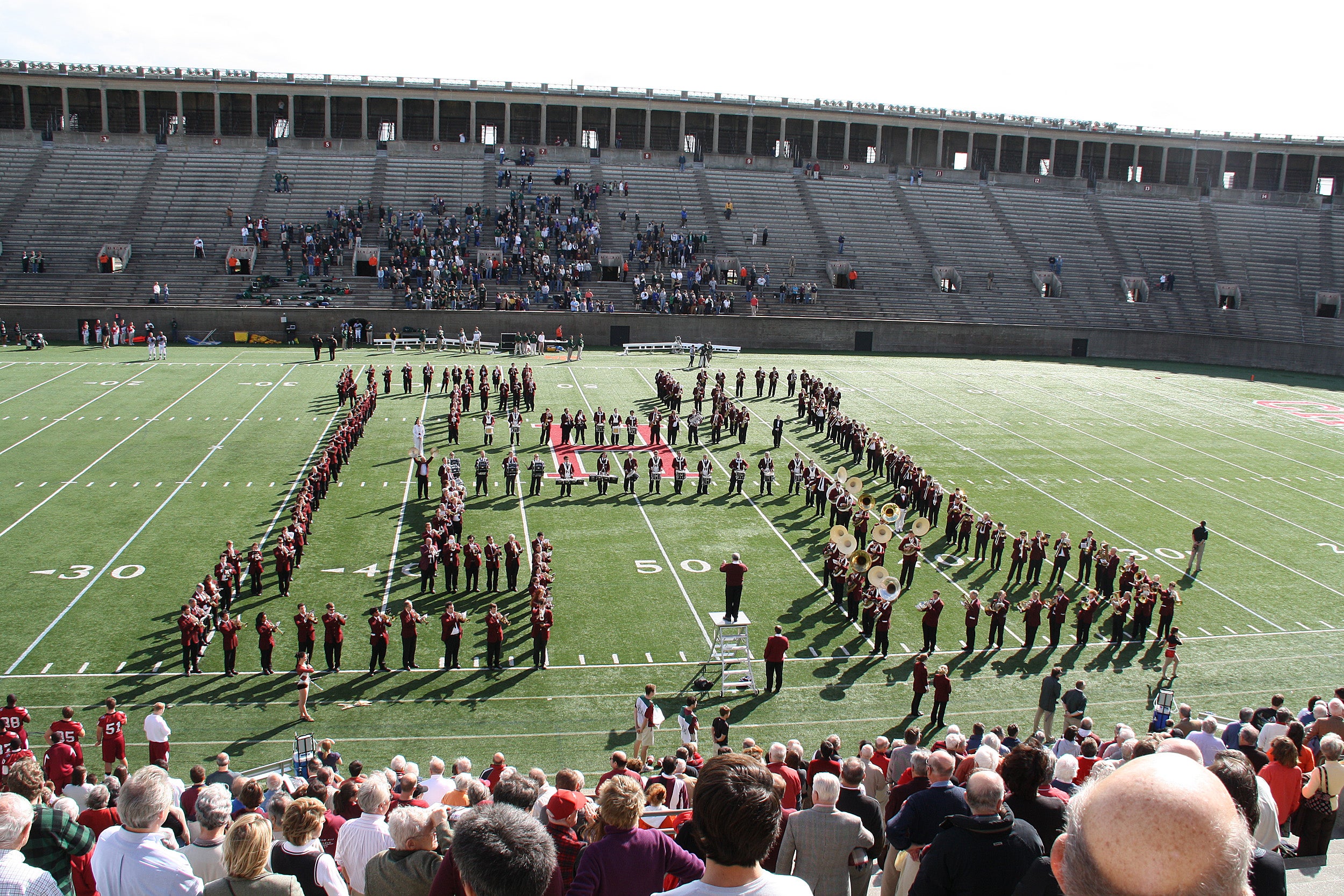 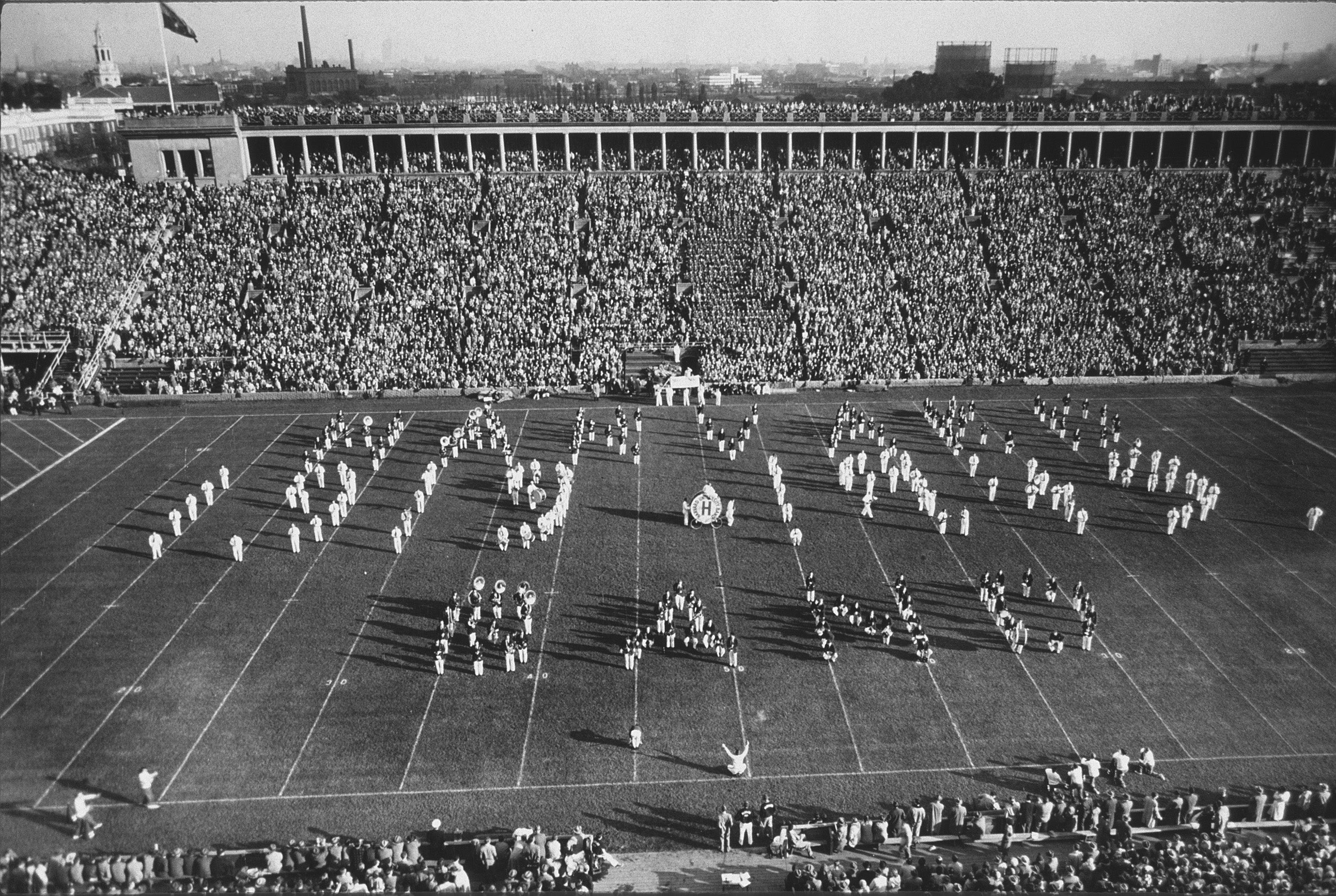 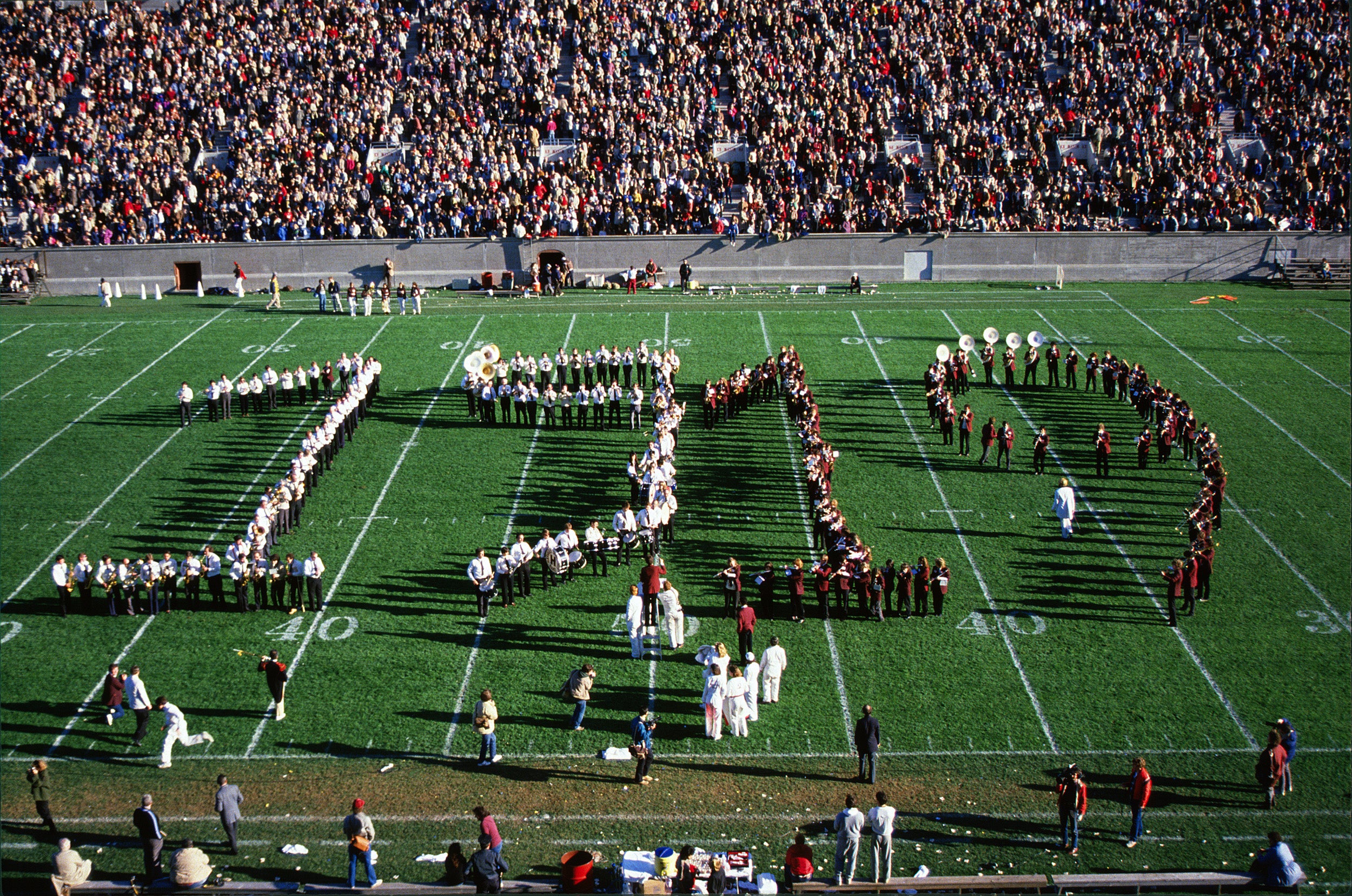 Band formations on the field through the years. 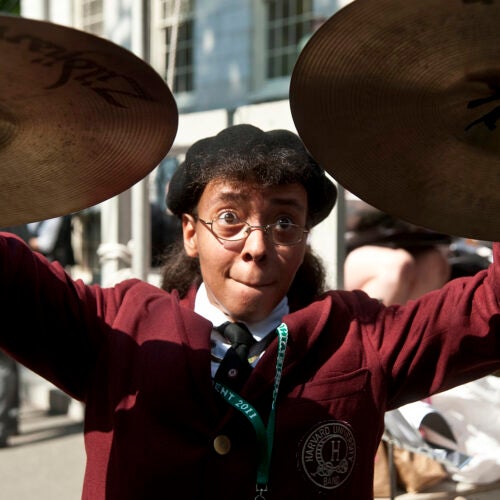 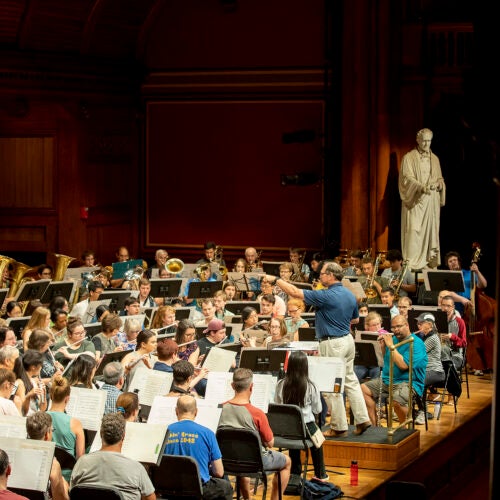 Old and young, experienced and novice, there are seats for all in the Harvard Summer Pops Band 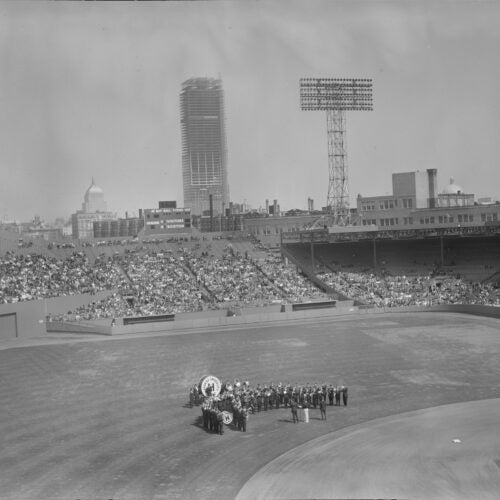