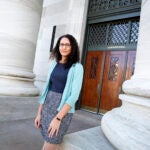 Latonya Wright ’00, who’s played the cymbals with the Harvard University Band at 22 consecutive Harvard Commencements, can easily jot off her favorite moments over the years.

There was J.K. Rowling’s speech in 2008; Joe Biden’s speech in 2017; and in 1997, the first Commencement she ever attended, musical legend Quincy Jones briefly conducted the Band, the reason Wright has been returning all these years. “When he came over, there was a big flurry of people finding pens,” Wright said.

Yet despite all the pomp, pageantry, and tradition of Harvard’s annual Commencement, Wright’s favorite moments are about the people attending and the joy they express throughout the day — hugs between classmates, smiles as they take selfies, dancing as the band plays, and families proudly witnessing their special students receiving diplomas.

“It’s exciting to play for the celebrities, but it’s becoming more rewarding to play for the students, families, and alumni who come over and film us during the ceremonies,” Wright said. “That usually means that the Band sounds good and the drumline has a satisfying groove happening. The Band is certainly having fun, and I love seeing that others are having fun with us by celebrating and dancing along.”

It never gets old, Wright said, so she hopes to see it all again this year.

“I haven’t missed one since [1997],” she said. “I suppose at first it was the excitement of a number of different things: getting to spend more time with my friends and [being] in Cambridge, getting to perform for so many people, getting to see and hear all the celebrities and dignitaries receiving honorary degrees. … All those things are still important to me, but now they’ve grown deeper.”

“For me, it’s really moving to have the entire University family together to observe everyone’s special day,” Wright said. “It is Harvard at its most Harvard.”

At her 23rd Commencement, Wright continues to do what she’s done since her very first: crashing cymbals.

“They’re the big bright shiny plates,” Wright said of the thin disk-like percussion instrument, which are often used in pairs to produce a reverberant crash. “They add a little special dash [to the drumline]. They add a little spice.”

The loud crashes, which Wright calls “flourishes,” are hard to miss and a lot of fun to make. Often, they’re in the music sheet, she said, but a lot of the times it comes down to creativity and having a good ear. For instance, during “Ten Thousand Men of Harvard,” the University’s fight song, if she hears the drummers doing something special she might add in a crash to complement.

“I usually try to time the flips, clicks, and crashes in places where the drumline is doing something equally visual or interesting [or] if there is a definite pause in the music the Band is playing, where a crash can fill the space,” Wright said. She will also add in flourishes when the corresponding words call for action, like the “Fight! Fight! Fight!” featured in the lyrics of many Harvard songs.

Wright had no experience with cymbals when handed her first pair at a Harvard hockey game her freshman year. She’s thankful for that moment, because it led to deep bonds with the University through membership in the Band.

“The current Band members are not really from my era, but I love the warm welcome I receive from them each year and I love keeping up with their lives and hearing how their Cambridge differs from mine,” Wright said.

Each year, Wright travels to Commencement from North Carolina, where she lives and works.

“It’s a recurring thing,” she said. “It’s like a reunion. We literally get the Band back together.”

Wright plans to keep that going as long as she can.

“I usually think I’m going to do it just one more year, but I expect I’ll be showing up to perform at my 75th [reunion] in 2075,” she joked. “In returning to play for so long, I’ve become a Harvard Commencement tradition in my own small way.”