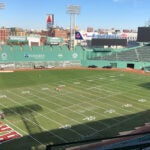 Harvard and Yale played their first football game in 1875. Fenway Park opened in 1912. As sports history goes, they’re both in the bedrock. And now they’re finally getting connected.

This Saturday, the Crimson and the Bulldogs will play the 135th chapter of The Game in sold-out Fenway Park. The Ivy League adversaries will battle on the turf where the Boston Red Sox less than a month ago won their ninth World Series championship.

While this will be the first time the Crimson have played football at Fenway, Harvard students, faculty, and staff are far from strangers to the iconic park. In fact, the University helped christen the hallowed grounds on April 9, 1912, when the Crimson baseball team played the Sox in the first event at Fenway, a snowy preseason exhibition won 2-0 by the Sox.

At 3:30 p.m. on that day, Harvard sophomore and Winchester, Mass., native Dana Joseph Paine Wingate, Class of 1914, stepped into the batter’s box to face Casey Hageman, a right-hander who would pitch in 32 games in a short major league career. That was the first at-bat in Fenway. Wingate struck out.

Since Wingate’s first swings, Harvard teams, musicians, and administrators have successfully played and performed in the shadow of the Green Monster. Here are some of those enduring moments:

Though they took the loss in Fenway’s frigid first game, the Boston Globe’s Melville E. Webb Jr. was kind to the Crimson nine. “On the whole…,” he wrote, “the college players did very well in the field … Out in center field (Richard Bowditch) Wigglesworth (’12) picked out two hard fly balls as they came swooping along through the snowflakes.”

Harvard played subsequent exhibitions against the Sox in 1913 and in 1916, when they beat the reigning — and later to repeat — World Series champions 1‒0. Harvard also played the National League’s Boston Braves there several times, until the Braves moved to their own stadium in 1915. Over the decades that followed, the Crimson baseball team would face Ivy rivals Princeton and Yale there, too.

Recent editions of the team have competed against Boston College, Boston University, and UMass Amherst in the baseball Beanpot classic, with the Crimson taking the title at Fenway in 2005. (They have won the tournament on four other occasions at various venues.) In 2012, Harvard was invited to smash balls off the Green Monster during a special batting practice session to commemorate the 100th anniversary of the first ballgame there.

Here’s the windup … and the pitch

Harvard’s hurlers aren’t the only members of the University community to throw a pitch from Fenway’s mound (or from a patch of grass near it). In July 2005, President Larry Summers toed the rubber for the ceremonial first pitch prior to a Red Sox-Yankees matchup, which the home team won 17‒1. And in 2010, President Drew Faust, a longtime baseball fan who once quoted Yogi Berra during Morning Prayers, threw the pregame pitch, reportedly high and outside, to Sox third baseman Mike Lowell. How did it feel? “Exciting, terrifying,” she told the Crimson.

O Say Can You See?

Harvard has frequently played a role in pregame festivities. In 2011, an honor guard from the Harvard University Police Department presented the colors during the national anthem. The Kuumba Singers, the Harvard band, and the Choral Fellows are just a few of the groups to have performed it. In 2014, Joshuah Campbell, who would later wow U.S. Rep. John Lewis with an original composition during last spring’s Commencement exercises, led the Harvard Krokodiloes in a stirring rendition of “The Star-Spangled Banner.”

Moonlighting at the ballpark

In a way, Harvard has been a part of the musical program during every Red Sox home game for the past 16 seasons: Fenway Park organist Josh Kantor is also a part-time library assistant at the University’s Loeb Music Library. Kantor hasn’t missed a game since he started in 2003, playing “Take Me Out to the Ballgame” about 1,300 times. “Sometimes, I hear that song in my sleep,” he said.

The life of a library assistant/organist has its perks. Kantor is able to use library resources when preparing material to perform, and the day and evening schedule allows him to pursue his love for both academia and live music. Kantor has played the 1930 Skinner (Opus 793) organ in Memorial Church and the 1958 D.A. Flentrop organ in Adolphus Busch Hall for friends’ weddings. He also has guest-lectured during a proseminar titled “Music, Power, and the Collective Voice,” and convened a panel at Harvard around the release of historic recordings from the guitarist Doc Watson.

“I’m fortunate at both Harvard and Fenway to regularly meet people from all over the world and make them happy, by helping them find the score that they’re looking for, or by playing their favorite song,” said Kantor, who famously takes requests.

Since Fenway first hosted the National Hockey League’s Winter Classic back in 2010, crews have prepped the stadium for a series of hockey contests. Both the Harvard men and women have played at Fenway, with the men losing 2‒0 to Union College back in 2012, and the women dropping their game against Boston College by a score of 3‒1 in 2017.

Despite playing their game in rainy conditions that forced them to negotiate large puddles, women’s team forwards Lexie Laing ’19, and Bradley Fusco ’19, who both assisted on the Crimson’s goal, said the experience was one of the highlights of their Harvard careers.

“We live in such a historic town, the city of champions, one that features both great professional and collegiate teams,” explained Fusco, who grew up in nearby Winchester. “To be able to connect the two, and to represent a great college program in the stadium of the world champions of Major League Baseball, a team that I watched growing up, and to do so in front of my whole family, was incredibly special.”

“It was such a unique experience,” added Laing, who got to spend time on the ice that day with both of her older sisters, Brianna ’17, who was Harvard’s goalie, and former professional hockey player Denna, who dropped the first puck. “The whole atmosphere was different. It was colder being outside, the stadium lights were on, even the way the sounds echoed throughout the stadium was something I’d never experienced before. And of course, the weather.”

“To me, all of these environmental factors let you let loose and appreciate the game, you know, that you were playing hockey in front of the Green Monster,” said Fusco.

“I agree,” said Laing. “It reminded us of why we play hockey.”

According to football captain and fifth-year senior Zach Miller, a similar excitement is mounting within the team, as it prepares to take on Yale in The Game.

Former teammate Ben Abercrombie, who was paralyzed in his first game with the Crimson last fall, will be back on campus in the lead-up to The Game, and he plans to spend time with his fellow players.

“This is the first time that Ben has been back to Harvard since he was injured against the University of Rhode Island, almost 15 months ago,” said head coach Tim Murphy. “It’s a big weekend for Ben and his family, and it’s a big weekend for our football team. We are putting together a very versatile itinerary for them to have an opportunity for him to be with his teammates, to meet with folks across the river to discuss his coming back to school next year … and with medical people in Boston since we have some of the best medical people on the planet here … From a team standpoint, everybody’s really, really excited to see Ben, and I know he will be an inspiration for us going into the Yale game.” 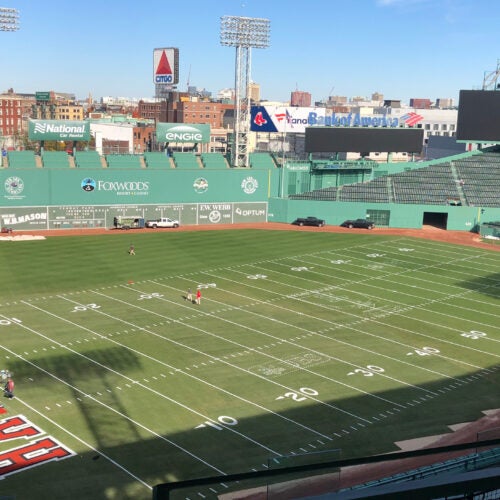 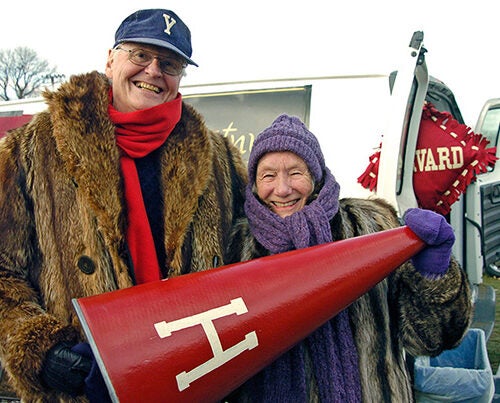 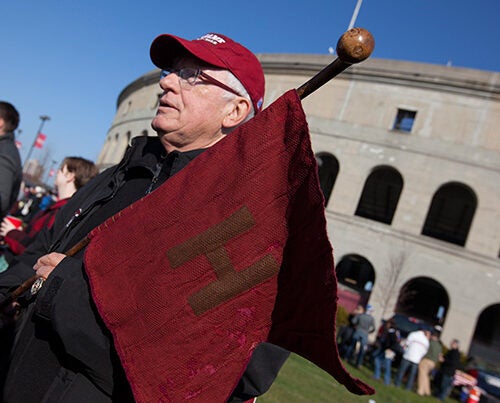 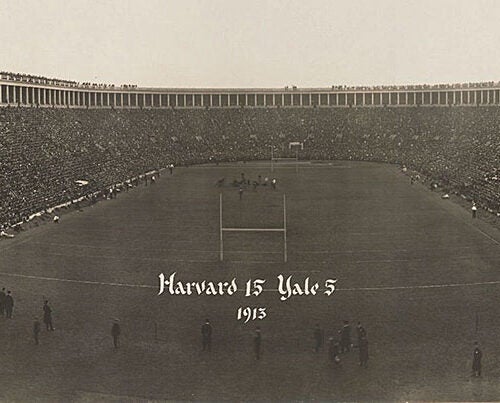 The fame of The Game

Harvard, Yale face off in football for 130th time

Fenway’s natural surface is prompting the team to use its grass practice fields for the first time since September (Harvard doesn’t often play on grass, as there are only two remaining Ivy schools that don’t have artificial turf, and one is Yale), and Miller says he and his teammates are expecting a tough, physical game. The game day set-up on the sideline will add an extra level of intensity, as Fenway’s configuration calls for the teams to be next to each other on the same side of the field. And the crowd, always raucous and totaling about 40,000 fans, will certainly play a role for both teams.

For those who’ll be part of the largest crowd at a Harvard “home” game (the match-up sold out in two days), there will be pregame opportunities to gather with friends, fellow students, alumni, and colleagues in an area for undergraduates in the stadium’s Ipswich Street parking lot, and in a fan zone located in the Brookline Avenue Lot for everyone else.

“I do empathize with folks who certainly take great pleasure and pride in the tradition of Harvard vs. Yale and Harvard Stadium as a home game,” said Murphy, who is coaching in his 25th edition of The Game. “But I think at the end of the day, anybody who ventures out for this game will have a really exciting, educational, and ultimately, satisfying experience.”