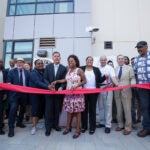 Paulsell, the Susan Shallcross Swartz Professor of the Practice of Christian Studies at Harvard Divinity School (HDS), will lead  Memorial Church, the nondenominational center of Christian life at the University, during the search for a permanent successor to Jonathan L. Walton. Walton stepped down this summer to become dean of the Wake Forest University School of Divinity.

A distinguished scholar who teaches religion and literature, Christian spirituality, and ministry studies, Paulsell has been an affiliated minister at Memorial Church for the past seven years. She is an ordained minister in the Christian Church (Disciples of Christ).

In a letter to the Harvard community, President Larry Bacow shared the news and expressed his gratitude to Paulsell for taking on the role.

“Stephanie is highly regarded among her colleagues for both her academic achievements and her pastoral commitments,” said Bacow. “For much of her distinguished career, Stephanie’s research has explored the intersection between intellectual work and spiritual practice, between the academic study of religion and the practices of ministry.

“She and [HDS] Dean David Hempton have been extraordinarily generous with their time and talent as planning for the search has gotten underway. I am deeply grateful to them both for their commitment to ensuring that the spiritual center of our community is well served during this period of transition.”

Paulsell, who joined the Harvard faculty in 2001, studied religion and English at Greensboro College and earned a Ph.D. in religion and literature from the University of Chicago. She said the Memorial Church has become an important presence in her life.

“Under the leadership of Professor Jonathan L. Walton, the Memorial Church has been a place where the life of the spirit, the life of the mind, and the struggle for justice in our common life have been deeply intertwined,” Paulsell said. “As an affiliated minister, it’s been an honor for me to preach and teach, pray and study, protest and lament with the Memorial Church community. I look forward to joining more fully in the life of the church this year, working closely with the extraordinary staff, and helping the community prepare for its next era of leadership on this campus and beyond.”

Along with her new position, Paulsell will continue her classroom duties. This fall, she is offering the course “Virginia Woolf and Religion” and will co-teach, with Amy Hollywood, a class on Emily Dickinson. She is the author of the upcoming book “Religion Around Virginia Woolf,” and the co-editor, with David Carrasco and Mara Willard, of “Goodness and the Literary Imagination,” a collection of essays on the religious dimensions of the work of Toni Morrison. She has also written “Honoring the Body: Meditation on a Christian Practice” and “Lamentations and the Song of Songs: A Theological Commentary on the Bible.”

“I know of no one who better brings together the academic and the spiritual, the worlds of ministry and scholarship than Stephanie Paulsell,” said Hempton. “She is also a very gifted communicator, both orally and in print. Through her study of literature, modern and ancient, she brings humane wisdom to bear on the complexities of human experience and inspires hope and mature reflection in her readers and listeners.

“As a dean of HDS, I’m also excited about the possibilities of closer collaboration between HDS students and the campus-wide ministry of Memorial Church.”

Memorial Church staff members received the news of Paulsell’s appointment with excitement. University organist and choirmaster Edward Jones served with Walton and with the legendary Rev. Peter J. Gomes, who oversaw the church for more than three decades before his death in 2011. Jones said Paulsell’s personal and professional qualifications make her the best person to lead the church during the transition.

“She’s incredibly personable and collegial, a brilliant academic and a wonderful preacher, and she certainly knows how Memorial Church works,” said Jones. “The nice thing about having someone like Stephanie in this position is that the University can probably take their time over the search and know that we’re in good hands during this period.”

Before the announcement of Pausell’s appointment, Memorial Church staff were hoping for Paulsell to be chosen as interim Pusey Minister, said Alanna Sullivan, associate minister at the church. In conversations Sullivan had with department heads, they all, independently, told her of their desire to see Paulsell become the interim minister.

“Everyone is so excited to work with her, and it is because of the unique constellation of gifts she brings,” said Sullivan. “She is a prophetic preacher, a pastoral presence, and a brilliant scholar. She has met with every single staff member at the church to hear about their work, their hopes, and how she can best support them.

“The church is here to serve the students of Harvard, and I’m hoping that Stephanie helps keep our student ministry and student programming as the heartbeat of our community,” she said.

Prior to Harvard, Paulsell served as director of ministry studies and senior lecturer in religion and literature at the University of Chicago Divinity School.

Paulsell is also the faculty adviser for the Harvard College Interfaith Forum and the chair of the Board of Religious, Ethical, and Spiritual Life at Harvard. She is a member of First Church in Cambridge.