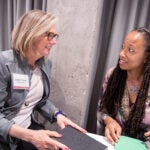 Executive education with a soul

John H. Shaw, the Harry C. Dudley Professor of Structural and Economic Geology, stepped down at the end of June, having served as chair of the Department of Earth and Planetary Sciences (EPS) since 2006.

Shaw, who joined the Faculty of Arts and Sciences in 1997 and is also a professor of environmental science and engineering at the John A. Paulson School of Engineering and Applied Sciences (SEAS), is a structural geologist and applied geophysicist who studies the nature of faults in the earth’s crust as they relate to energy systems and natural hazards, particularly earthquakes. One of the key directions of research for Shaw’s lab is the scientific visualization of models of the Earth’s structures around energy systems and active faults. He co-chairs the board of the Southern California Earthquake Center. Shaw also help found the EPS’s Visualization Research and Teaching Lab.

Reflecting upon Shaw’s 13 years as chair, Jeremy Bloxham, the Mallinckrodt Professor of Geophysics, whose tenure as dean of FAS Science coincided with Shaw’s time as EPS chair, noted that, “John’s extraordinarily successful shepherding of the department was built upon a foundation of leading by example: his outstanding teaching, his groundbreaking research, but most of all the incredible respect he showed for everyone in the department — the undergraduates, the graduate students, the administrative and research staff, and the faculty.”

Shaw talked to the Gazette about mentoring, virtual reality labs, and how climate change has shaped the curriculum.

SHAW: There’s always been a close connection between Earth science and geology and societally relevant issues. In the context of climate change, there’s not only a research mandate to understand this complex natural system and the ways in which we’re impacting it, but there’s also an important role to educate people about what we know and what we don’t know, and with that uncertainty, [to think about] how we can make good decisions that are going to protect our planet and ourselves.

GAZETTE: How is this shaping the undergraduate curriculum in EPS?

SHAW: When it comes to energy and the environment, students are increasingly aware of what’s going on in the world around them, and they are bringing these interests into the classroom. As a relatively small program, we expanded our Gen Ed offerings in recognition that issues of Earth science are pressing issues in society. We want to give students the opportunity to be educated about these topics, even if they are not pursuing our field. We also changed our model of introductory courses. It used to be there was a single introductory course, or set of courses, required of all students, but that model created a barrier to entry. Something that we’ve done to reflect the spirit of an environmental science and engineering advising cluster is that we now offer a wider sweep of introductory courses for students to take that reflect their particular interests. There are more ways into a concentration than there used to be.

GAZETTE: Data visualization is essential to your research and teaching. How has the VR and teaching lab contributed to your scholarship?

SHAW: My research involves scientific visualization of Earth models that we build describing both energy systems and active faults — things that lie below the surface so we can’t see them with the naked eye. There’s a real importance to having a virtual reality that describes these geological structures and systems, because we want to understand and predict their behaviors and to inform people about them.

We developed the visualization laboratory more than a decade ago and at first it was dedicated to our research. It’s now become a powerful tool for teaching science in a way that’s much more interactive. The lab also has had applications beyond EPS, helping faculty and students across the University to conduct their scholarship and teaching.

During the past decade we’ve partnered with the FAS Science Education program and a number of different groups to support a staff that enables use of the lab and associated VR resources across a range of disciplines. For example, we’ve partnered with Peter Der Manuelian for his course on Egyptology, enabling students to virtually be present in the Giza Plateau, and this past year we had new applications, including virtual field trips to Mars and French language classes in Paris.

GAZETTE: EPS, together with environmental science and engineering, has recently created a Diversity, Inclusion, and Belonging Committee. Why was this important for you as chair?

SHAW: We want to be sure that we are providing a teaching and learning environment that is as welcoming as possible to all members of our community. If you’re trying to foster community culture and conversation, you need to first recognize that all groups have a stake in this and that you have a means to communicate and share ideas. This committee, which includes graduate students, undergraduates, staff, and faculty, has become an incredibly powerful agent to help us think about how to do that, whether that’s in the context of the federal immigration ban, which deeply affects the international science community, or the #MeToo movement.

SHAW: Mentoring is one of the most rewarding parts of my experience as a faculty member — it’s a process of enabling somebody to fulfill their potential, to support them in terms of doing their own independent work and scholarship, and to build a community. I want to preserve and improve that.

There’s a kindred spirit in all academicians — we’ve all been graduate students before, so I believe we can understand what’s important to Harvard’s graduate students. This process is still very much ongoing, and I hope that we will find an agreement that serves our community. 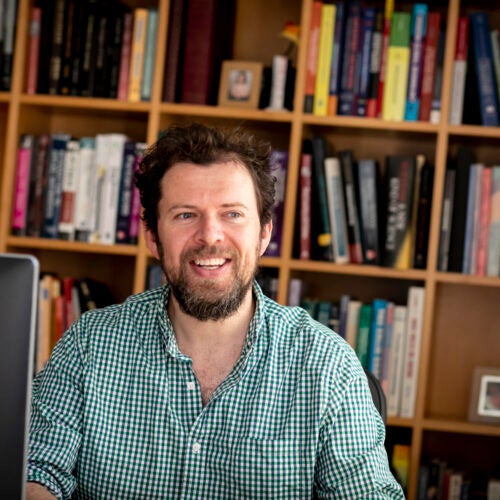 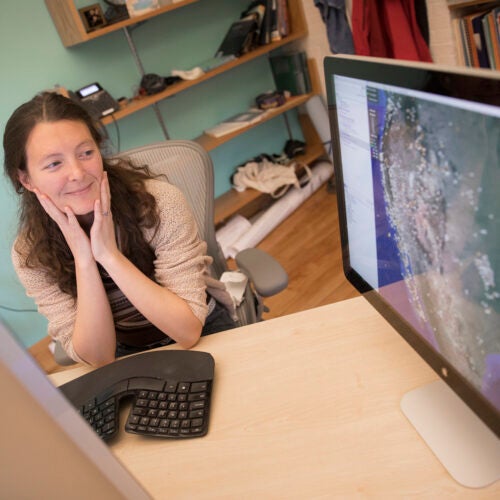 GAZETTE: Two of the areas you study, energy systems and earthquakes, are becoming increasingly intertwined.

SHAW: Traditionally, groups that study energy systems and earthquakes don’t communicate with one another — they work on different projects, go to different conferences, and don’t know much about what the other is doing. However, we have come to see in places like Oklahoma and Denmark that energy operations — oil and gas, geothermal — can cause earthquakes. These induced or triggered earthquakes present hazards to the people that live and work in these regions, and as a result can halt or limit the energy operations. This is a head-on collision between my two fields of scholarship. We have developed a collaboration with colleagues at MIT to numerically simulate the impact that energy operations can have on the stress states acting on faults. This helps to explain the origins of earthquakes — are they induced or natural? — and can assist governments and companies in developing field-management guidelines that ensure safe, ongoing operations.