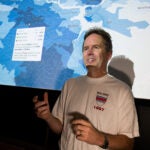 In the weeks and months following a major earthquake, the surrounding area is often wracked by powerful aftershocks that can leave an already damaged community reeling and can significantly hamper recovery efforts.

While scientists have developed empirical laws to describe the likely size and timing of those aftershocks, such as Bath’s Law and Ohmori’s Law, forecasting their location has been harder. But sparked by a suggestion from researchers at Google, Brendan Meade, professor of earth and planetary sciences, and Phoebe DeVries, a postdoctoral fellow working in his lab, are using artificial intelligence technology to try to get a handle on the problem.

Using deep-learning algorithms, the pair analyzed a database of earthquakes from around the world to try to predict where aftershocks might occur, and developed a system that, while still imprecise, was able make significantly better forecasts than random assignment. The work is described in an Aug. 30 paper published in the journal Nature.

The notion of using artificial intelligence (AI) neural networks to predict aftershocks first came up several years ago, during the first of Meade’s two sabbaticals at Google in Cambridge. While working on a related problem with a team of researchers, Meade said, a colleague suggested that the then-emerging “deep-learning” algorithms might make the problem more tractable. Meade would later partner with DeVries, who had been using neural networks to transform high-performance computing code into algorithms that could run on a laptop to focus on aftershocks.

“The goal is to complete the picture, and we hope we’ve contributed to that,” Meade said.

Meade and DeVries began by accessing a database of observations made following more than 199 major earthquakes.

“After earthquakes of magnitude 5 or larger, people spend a great deal of time mapping which part of the fault slipped and how much it moved,” Meade said. “Many studies might use observations from one or two earthquakes, but we used the whole database … and we combined it with a physics-based model of how the Earth will be stressed and strained after the earthquake, with the idea being that the stresses and strains caused by the main shock may be what trigger the aftershocks.”

Armed with that information, the researchers then separated the quake area into 5-kilometer-square grids. The system checked whether there was an aftershock inside each square, and asked the neural network to look for correlations between where aftershocks occurred and the stresses generated by the main quake.

“The question is what combination of factors might be predictive,” Meade said. “There are many theories, but one thing this paper does is clearly upend the most dominant theory — it shows it has negligible predictive power, and it instead comes up with one that has significantly better predictive power.”

What the system pointed to, Meade said, is a quantity called the second invariant of the deviatoric stress tensor, better known simply as J2.

“This is a quantity that occurs in metallurgy and other theories, but has never been popular in earthquake science,” he said. “But what that means is the neural network didn’t come up with something crazy, it came up with something that was highly interpretable. It was able to identify what physics we should be looking at, which is pretty cool.”

DeVries said that interpretability is critical because many scientists have long viewed AI systems simply as black boxes capable of producing an answer based on data.

“When we first trained the neural network, we noticed it did pretty well at predicting the locations of aftershocks, but we thought it would be important if we could interpret what factors it was finding that were important or useful for that forecast,” she said.

Taking on that challenge with highly complex real-world data, however, was daunting, so the pair instead asked the system to create forecasts for synthetic, idealized earthquakes, and then they examined the predictions.

“We looked at the output of the neural network, and then we looked at what we would expect if different quantities controlled aftershock forecasting,” she said. “By comparing them spatially, we were able to show that J2 seems to be important in forecasting.” 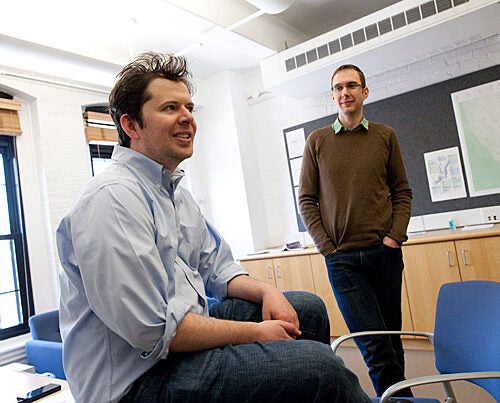 And because the network was trained using earthquakes and aftershocks from around the globe, Meade said, the resulting system worked for many different types of faults.

“Faults in different parts of the world have different geometry,” Meade said. “In California, most are slip-faults. But in other places, like Japan, they have very shallow subduction zones. But what’s cool about this system is you can train it on one, and it will predict on the other, so it’s really generalizable.

“We’re still a long way from actually being able to forecast them,” she added. “We’re a very long way from doing it in any real-time sense, but I think machine learning has huge potential here.”

Meade said he is now working to use AI technology to help predict the magnitude of earthquakes, with the goal of one day helping mitigate their devastating impact.

“Orthodox seismologists are largely pathologists,” Meade said. “They study what happens after the catastrophic event. I don’t want to do that; I want to be an epidemiologist. I want to understand the triggers, causing, and transfers that lead to these events.”

Ultimately, Meade said, the study highlights the potential for deep-learning algorithms to answer questions that, until recently, scientists barely knew how to ask.

“I think there’s a quiet revolution in thinking about earthquake prediction,” he said. “It’s not an idea that’s totally out there anymore. And while this result is interesting, I think this is part of a revolution in general about rebuilding all of science in the artificial-intelligence era.

“Problems that are dauntingly hard are extremely accessible these days,” he continued. “That’s not just due to computing power. The scientific community is going to benefit tremendously from this because … AI sounds extremely daunting, but it’s actually not. It’s an extraordinarily democratizing type of computing, and I think a lot of people are beginning to get that.”

This research was supported with funding from Harvard University and Google.