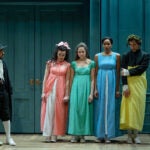 Four thousand years ago, a member of Egypt’s elite was buried on the Giza Plateau in an elaborate stone tomb, complete with several rooms and underground chambers.

Then, in 1912, a team from Harvard University and the Museum of Fine Arts (MFA) in Boston excavated the tomb, of a type called a mastaba, and brought back with them a limestone wall from its chapel.

The wall, housed at the MFA, is inscribed with images of the deceased, an official named Akh-meret-nesut, and his family in various poses — sitting, leaning on a staff, throwing a lasso.

Today, more than a century later, Harvard doctoral student Inês Torres wants to know as much as she can about Akh-meret-nesut: who he was, what he did, and why he was buried on the Giza Plateau in the shadow of the pyramids long after pharaohs’ burials there had ceased.

But Torres faces a problem familiar to many scholars studying ancient Egypt: getting access to what she’s studying. With part of the tomb in Boston and part in Egypt, she’d have to time travel to see it intact. Other scholars may face different hurdles, but the problem is the same: Documents and images are held in faraway archives, artifacts and other relics of ancient Egypt have been dispersed, stolen, or destroyed, and tombs and monuments have been dismantled, weather-worn, or locked away behind passages filled in when an excavation closes.

Hurdles can also be economic: The object of study may be intact, but the plane fare and expenses of living for weeks in the field or lodged in the cities — Cairo, London, Berlin, Paris, Boston — that are home to museums with large Egyptian collections hard to come by.

It was with scholars like these in mind that Digital Giza Project was born.

The project was created in 2000 by Peter Der Manuelian, who at the time was on the curatorial staff at the MFA. A scholar of ancient Egypt, Manuelian said his initial vision was to create a digital record of the work of Harvard’s legendary Egyptology Professor and MFA curator George Reisner and the Harvard-MFA Expedition he led. The expedition was one of the major academic archaeological efforts at Giza and other sites in Egypt during the early 1900s.

Reisner, who led the expedition for more than 40 years, dug at 23 sites, and Manuelian soon realized that just digitizing material relating to the vast finds on the Giza Plateau — which includes not only the pyramids and the Sphinx, but also associated temples, nearby cemeteries, and even a workers’ village — would be a career-long challenge. In 2010, he moved to Harvard to become the Philip J. King Professor of Egyptology and director of the Harvard Semitic Museum, and he brought the Giza Project with him.

The project staff’s ambition has since expanded to include not just Reisner’s work at Giza, but that of other archaeologists at the site as well, making it a comprehensive resource for Giza archaeology. It contains some 77,000 images, 21,000 of them Harvard University-MFA Expedition glass-plate negatives, and 10,000 of Manuelian’s own images. It has published manuscripts as well as unpublished expedition records, dig diaries, object record books, and sketches and drawings made by the archaeologists doing the digging. In January, during Harvard’s winter recess, Manuelian visited Egypt and collected another 5,000 digital images — including panoramic photos — of Giza and related objects in the Egyptian Museum in Cairo.

A key feature of the Giza Project is the fact that the material it holds is cross-referenced online, allowing a researcher to seamlessly move from a 3D image of an object to scholarly articles about it to diary pages by the archaeologist who discovered it.

“For people who focus on this particular period, this is the main resource for them to go to,” Manuelian said. “It’s thrown the doors wide open to this material that was previously only in the publications that Reisner lived long enough to finish.”

As the work has advanced, so has technology. Manuelian’s vision has expanded to include 3D re-creations of statues and artifacts that allow researchers to view them online, rotate them, and zoom in on specific features. Looking to the future, he said, 3D models’ source codes could be made available, which would allow distant scholars with access to 3D printers to create their own physical models.

“All of this allows us to ask new questions and to put the data together in ways not possible before and to make intelligent links,” Manuelian said. “If someone gets a grant and decides to go to the MFA and look through their records, good luck. There’s just so much, it’s overwhelming. If you go to Giza today, a tomb may have been reburied or vandalized, or is in not as good shape as it was in 1916. Objects might have gone to the basement of the Cairo museum, never to be seen again.

“With our attempt to put this all together digitally, with diaries and maps and plans and things, it allows you, first of all, convenient access to the data and then you can start to notice patterns.”

The Giza Projects’ 3D modeling extends beyond artifacts to locations. Manuelian’s team has already created video-game-like 3D versions of the entire Giza Plateau, with the Khafre pyramid, the Sphinx, and several temples and tombs posted so far and more to come. Those models can be accessed from the Digital Giza website and toured using controls on a laptop or desktop computer. Other re-creations, using high-resolution photographs of tombs’ interiors, let visitors walk through virtual burial chambers using stereo headsets. Visitors can move around inside the tombs and even walk up to a wall to examine a particular relief or other detail. About 20 tombs have been modeled in detail so far, with hundreds more to go.

“My hope is eventually to fly drones over the site, documenting everything from the air,” Manuelian said. “And complementing that with walks up and down the ‘streets’ [between rows of tombs] creating 360-degree panoramic visualizations, all linked to the more-traditional archaeological data that we have already assembled.”

For someone like Torres, studying a tomb that has one room in Boston and the rest in Egypt, a virtual model is the only way to see the intact structure, so she’s planning on creating one as part of her doctoral work.

“This tomb is divided between two countries,” she said. “3D modeling is the only way we can put it back together again.”

The overarching goal, Manuelian said, is to make scholarship in Egyptology more accessible than ever. And, while digital images may not fully replace the real thing, he said, foundational study can be conducted using the wide array of material presented by the project, allowing scholars to conserve scarce resources for when they’re essential.

The project’s 3D re-creations and data visualizations, together with the capabilities of the Harvard Visualization Center, also allow the Giza Project to give students a unique educational experience. Last fall, Manuelian gathered his students in a tomb in cyber space, using the center’s virtual reality headsets, and linked the class to students in Zhejiang University in China. Students’ avatars gathered at the virtual site — in this case, the Sphinx — with the technology, allowing Manuelian to act as a cyber tour guide.

“The project is all of these diverse approaches,” Manuelian said. “It’s a traditional database and website. It’s the intelligent linking of this photo to that tomb to this diary page. It’s the 3D modeling as we try to build more and more of the necropolis all the time. And it’s ultimately intended to enable the kind of remote teaching — what I call educational telepresence — where we can all be at Giza virtually and visiting the site and having a lecture inside a decorated tomb chapel no matter where you live.”

Torres said there is an irony to studying Giza: It is one of the world’s most famous archaeological sites, but in many ways it is still unknown. While the pyramids and Sphinx are world-famous, and have been for centuries, in their shadow new tombs are still being uncovered, while known tombs, workers’ houses, and other sites are yet to be fully explored and studied.

“Giza is such a well-known site, but in some sense, it’s understudied,” Torres said. “Because the pyramids are so amazing, the things all around them fade.”

With so much work to be done, the access to digitized documents and materials might inspire scholars curious about ancient Egypt but without access to the sites themselves or a major Egyptological library to take up the job.

“I think that’s the way to go forward, to make sure everyone has access,” Torres said. “Possibly there are geniuses who don’t have a great library and could do something wonderful with the information.”

Another graduate student, Hilo Sugita, plans to study the sarcophagi found at Giza. Using the Giza Project’s data, she can examine photographs of inscriptions, find their original locations within tombs, and even create 3D models.

“We have photographs, journals, glass negatives, letters, artifacts, publications,” Sugita said. “I think the Digital Giza Project is amazing because we’re trying to collect all the data about Giza everywhere and make it available on the website. You don’t have to go to the MFA, you don’t have to travel to Berlin.”

Technology’s advance is not without challenges, however. The digitization of archaeology, Manuelian said, is something like “the Wild West,” with competing file formats and uncertainty about how the growing data troves will be translated into next-generation software.

In addition, standards for what goes into a 3D re-creation are loose. Should a digital model reflect the state of a tomb as it was found, for example, or is it OK to color in reliefs on the walls to match paint residue found there? How far should digital re-creations go in filling in missing details, some of which are backed by scholarship, but others of which are more speculative, driven by knowledge of common practice rather than evidence at that specific site?

Early in the spring term, Manuelian gave students in his Gen Ed “Pyramid Schemes” class, which provides an overview of ancient Egypt, a glimpse of Giza using Giza Project models. The students visited the Harvard Visualization Center’s home on the second floor of the Geological Museum building, which is equipped with a curved floor-to-ceiling screen occupying one full wall and a suite of 3D and virtual reality tools.

He gave them a tour of both the technology — which can depict sites in detail — and the archaeology, showing them three-dimensional re-creations viewed with 3D glasses and letting them walk through a tomb via a virtual-reality headset.

Manuelian also encouraged students to not only soak up the experience, but to think about the challenges inherent in such an approach, where it might further education and scholarship, and what its shortcomings might be. And, with so much work still to do, he also made a pitch.

“This is a project that is waiting for people like you,” he said. 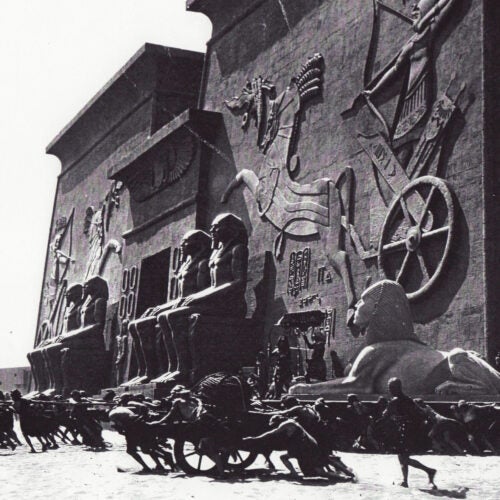 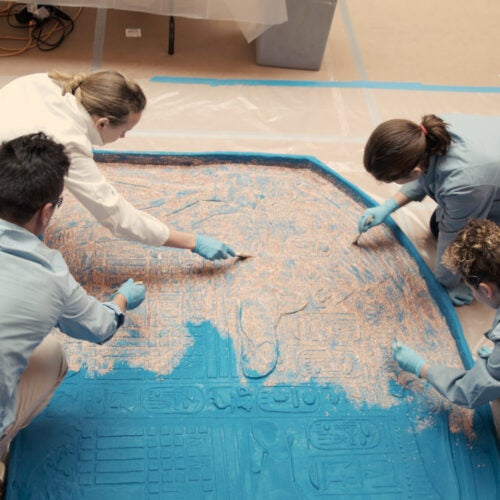