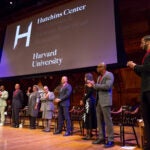 At what other event would you hear, “This time there would be no Jell-O?” mused Egyptologist Peter Der Manuelian last Wednesday at the Harvard Art Museums.

It sounded like a line straight from the wildly popular Science and Cooking Public Lecture Series, but the actual setting was a discussion and screening of a motion picture classic. Jell-O, it turns out, played the role of the famously parted Red Sea in Cecil B. DeMille’s 1923 silent “The Ten Commandments.” (It made no repeat appearance in DeMille’s 1956 remake.)

Lacking high-tech effects in 1923, DeMille and his production team opted for a 5-foot tub filled with the gelatin dessert, along with a few camera tricks, to work their miracle. But there would be no tricks when it came to creating the set for the film in the dunes of Guadalupe, Calif., a stand-in for Egypt. For months, an army of workers toiled on the 800-foot-wide, 100-foot-tall structure.

DeMille’s silent classic has captivated film buffs for generations, but it was the vision of the massive set buried in the desert that captured the imagination of NYU film student Peter Brosnan in 1982. After hearing of a giant sphinx swallowed by the California dunes, Brosnan began a 30-year quest to unearth DeMille’s vision, a giant model of the City of the Pharaoh designed for the movie by the Paul Iribe, the “father of Art Deco.” The set had mysteriously vanished when the film wrapped.

Brosnan’s fascination with the past and his archaeological hunt yielded his 2016 documentary “The Lost City of Cecil B. DeMille.” Members of the production team visited campus last week to discuss challenges with the dig in Guadalupe, 150 miles north of Hollywood, including a complex permitting process, lack of funding, protected birds, poor weather, and erosion.

As the director of the Harvard Semitic Museum, Manuelian is no stranger to massive artifacts, real or replicated. During the talk, the Philip J. King Professor of Egyptology was eager to learn more about how the set-framing sphinxes were created.

The project’s lead archaeologist, M. Colleen Hamilton, explained that they were fashioned from a single plaster cast mold, and that the desert helped preserve some of DeMille’s material, including certain sections of the hollow sphinxes. “When they were buried the sand filled the cavity, and that’s what kept them from being crushed,” said Hamilton.

Stepping in for Brosnan, a last-minute cancellation, was the film’s producer, Dan Coplan, who said the filmmaker’s fascination with the project grew out of his desire to save an important part of movie history, and to “prove to the world that this really does exist.”

The documentary is part archaeological success story, part history of cinema, with Brosnan tracking both his own efforts and those of DeMille, who in 1956 released a second version of “The Ten Commandments,” a Technicolor blockbuster starring Charlton Heston and Yul Brynner. (This time around, the director built his set in the desert outside Cairo.)

As the documentary opens, Brosnan recalls watching DeMille’s 1956 movie when he was 5.

“It’s the first film I remember seeing,” he says to the camera, “and I think it stayed with me so much not in the spiritual sense — in the sense of ‘How did they do that?’ and ‘How did they affect me so much with this image that they put on the screen?’”

Brosnan’s film offers a compelling narrative and visuals. It also features a clever technological timeline. In 1923 DeMille filmed in the California desert with hand-cranked 35 mm cameras. Sixty years later, Brosnan and his team arrived with 16 mm cameras and sound. Over the years they switched to video and then, near the end of the production, digital high-definition equipment.

“And my kids are here,” says Bronson as the documentary comes to a close, “filming me with an iPhone.”

The talk was held in conjunction with Massachusetts Archaeology Month. On Oct. 26, the Harvard Art Museums will host a talk with staff, students, and faculty about work at Sardis, in western Turkey.