The future of archaeology 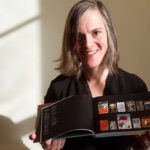 Interesting readers, as well as writers

Manuelian, an Egyptologist, is steeped in digging but wedded to the Web

When he first stumbled on the field that would become his life’s work, Peter Der Manuelian was a fourth-grader in suburban Boston. The object of his attention was 5,000 years old.

He was transfixed by ancient Egypt. “It was the first time a subject grabbed me,” said Manuelian ’81, who is Harvard’s first Egyptologist since 1942, and who realizes that a childhood fascination with pyramids usually goes the way of dinosaurs and superheroes. “Most people grow out of it. I never did.”

It was the vast scale of things he fell in love with — the huge pyramids, and the three millennia that Egypt was an unwavering civilization of pharaohs and deities and social systems as stable as salt beds. Of course there were the mummies too, and the gorgeous art, and the puzzle of the language written in hieroglyphs.

Sustaining his interest through the years was the incomparable collection of Egyptian artifacts at the Museum of Fine Arts, Boston (MFA), where the young Manuelian signed up as a volunteer. The longest running archaeological dig in Egypt and the Sudan (1905 to 1947) was the joint Harvard-MFA Expedition, and thousands of artifacts came to be housed in Boston. “I was lucky to be local,” he said.

By the time Manuelian enrolled at Harvard College in 1977, he had already spent the first of what were to be numerous summers on expedition to Giza, a site filled with pyramids, temples, and tombs just west of modern Cairo. And he was in his second year as an assistant at the MFA in ancient Egyptian, Near Eastern, and Nubian art. So Manuelian was well primed for his next major Egyptological inspiration: Harvard itself.

A key mentor was Thomas Oden Lambdin, the College’s senior teacher of biblical Hebrew, Egyptian, and a host of other languages, and the closet thing Harvard had to an Egyptologist at the time. “He took me in,” said Manuelian, whose present-day office at the Semitic Museum is next to the office that Lambdin (now emeritus) once occupied. (For effect, there is a mummy nearby too.)

Returning to Boston in 1987, Manuelian rejoined the MFA as an Egyptian Department curator, lectured at Harvard, taught at Tufts University for a decade, and in 2000 became Giza Archives director at the MFA, a post he held until 2010. In July of that year, he was named Harvard’s Philip J. King Professor of Egyptology.

To find a parallel you have to go back almost 70 years to George A. Reisner, who was the University’s de facto Egyptologist from 1910 to 1942. He lived and worked in the fruitful tumult of an era of fervent artifact hunting in the ancient world. “He was my predecessor and my hero,” said Manuelian, who is writing a Reisner biography. “He was one of the first scientifically minded archaeologists.”

Reisner was so busy at Harvard Camp at Giza, and at 22 other dig sites, that he taught in Cambridge perhaps just a few semesters in his four decades with the University. “You could fault him” for teaching so little, said Manuelian — but not really. “He was interested in excavating.”

Manuelian is a digger too, one with a grasp of computer-based tools that capture and archive data and artifacts in 3-D layers of information. The showcase of that effort is the Giza Archives Project, a decade-long effort to assemble all extant Giza materials into a comprehensive, attractive, searchable whole. (There are 37,000 photographs, 1,200 spinning 360-degree panoramas, and more than 21,000 objects currently online.) “I’m a cataloger, basically,” said Manuelian. “I’m trying to bring diverse materials together.” Helping him have been the more than 400 students and volunteers that he has recruited for the work over the last decade, in addition to more than $3 million in support to the MFA from the Andrew W. Mellon Foundation.

At the heart of the project is the mass of maps, excavation photographs, diaries, letters, tomb records, artifacts, and other finds from the 1904-1947 Harvard-MFA Giza Expedition. To enrich the database, Manuelian has scoured Giza collections in Egypt, Austria, Germany, France, the United States, and elsewhere.

Manuelian is working with colleagues from Dassault Systèmes to develop computer interfaces that let a student roam through a virtual Giza necropolis, plunge down a tomb shaft to look around, or click on a sarcophagus to link to layers of related documents. He uses these tools for teaching in Harvard’s Visualization Center at the Geological Museum, thanks to collaborations with the Department of Earth and Planetary Sciences.

“It isn’t static,” he said of the new technology of digital excavation. “It’s an immersive way to teach Giza archaeology.”