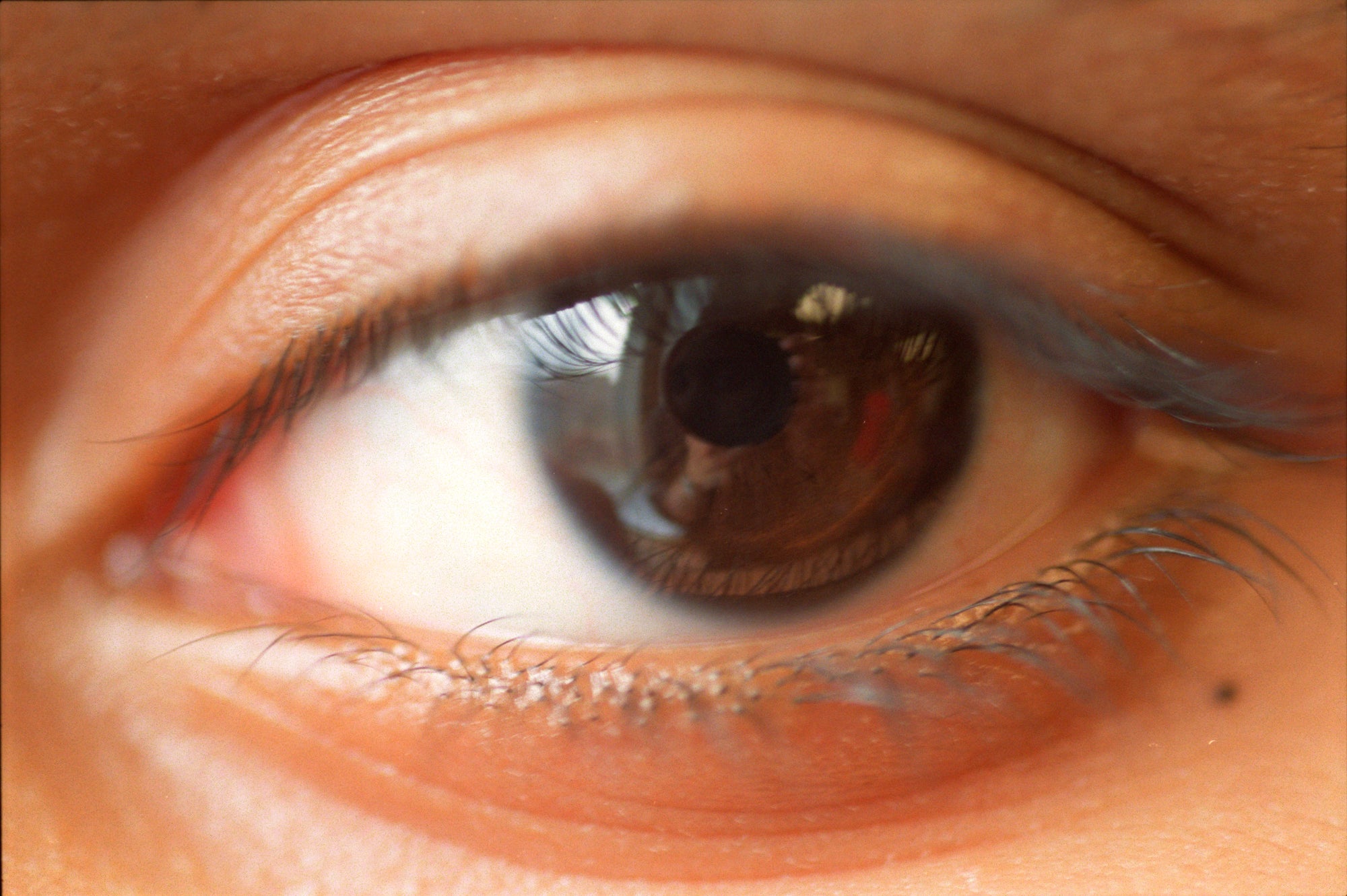 Usually, calling someone a bird-brain is meant as an insult, but an African grey parrot named Griffin is rewriting the rules when it comes to avian intelligence.

A new study shows the African grey can perform some cognitive tasks at levels beyond that of 5-year-old humans. The results not only suggest that humans aren’t the only species capable of making complex inferences, but also point to flaws in a widely used test of animal intelligence. The study is described in a November paper published online in Behaviour.

The paper arose from a collaboration among cognitive psychologists Irene Pepperberg, a research associate in Harvard’s Psychology Department; Francesca Cornero ’19; Suzanne Gray, A.L.B. ’15, now the manager of the Alex Foundation at the Pepperberg Lab; and developmental psychologists Susan Carey, the Henry A. Morss Jr. and Elisabeth W. Morss Professor of Psychology, and Shilpa Mody, Ph.D. ’16.

The classic study uses a two-cup test. A reward is hidden in one of two cups; subjects are then shown that one cup is empty, and those that successfully choose the other cup are thought to employ a process known as “inference by exclusion” — reasoning that the reward is in cup A or B; if it is not in A, it must be in B.

For years, researchers have argued that young children, including infants as young as 17 months, and animals from a wide number of species, including grey parrots, understand this process.

“This is really about logic,” Pepperberg said. “In the wild, nonhumans must make these kinds of choices when they decide on things like, ‘Where should I forage? I saw other creatures eating food in this area. … If there’s nothing right here, I should deduce that something is nearby.’”

But what’s important about this study is not just that Griffin is, in some ways, as smart as a 5-year-old, but, said Pepperberg, “We also argue that this two-cup task, which has been the gold standard, only tells you about a certain level of ability. If you really want to study inference by exclusion, you have to go to the more complicated three- and four-cup tasks.”

Based on Carey and Mody’s notion that the two-cup task wasn’t an effective test of human cognition — that subjects could be choosing that B cup simply by default, not because they think the reward must be there — Pepperberg, Gray, and Cornero decided to put Griffin’s apparent smarts to the test.

Designed to add a wrinkle to the two-cup task, the more complex tests work like this: For the three-cup test, one reward is hidden in a single cup, and another is placed in one of two additional cups to one side of the first cup. When faced with a choice, participants should pick the single cup, as it is the only cup guaranteed to have a reward. This task doesn’t test inference by exclusion, but does test understanding of certainty versus mere possibility — a precursor to exclusion.

Tests have shown that, until they reach about 2 and a half years old, young children fail at similar tasks. The same goes for apes. But Griffin outperformed even 5-year-olds.

The four-cup test works similarly: Rewards are placed in one cup of each pair, then one cup in a pair is shown to be empty. Successful subjects will then pick the other cup in that pair, understanding that it must hold the reward, and that they have only a 50-50 chance of finding the reward in the other pair. Two-and-a-half-year-old children again fail, showing that they do not fully understand inference by exclusion.

Though Griffin passed both tests with flying colors, Pepperberg, Cornero, and Gray wanted to be sure he hadn’t simply learned to choose whichever cup was next to the empty one, so they designed a series of additional trials to test this possibility.

“Basically, we forced him to gamble,” Pepperberg said. “For a small percentage of trials, we would put nothing on one side and show him an empty cup on that side … so he if wanted a reward, and understood the system, he’d know that now he couldn’t go to the cup next to the empty one; instead he’d have to gamble on the 50-50 side. And he hated it, but he did it on all the trials in the subset.”

The trio even developed a test in which he had the choice between the guaranteed small reward of a nut or, in a small percentage of trials, gambling and potentially receiving one of his favorite treats — a Skittle.

“We wanted to make sure he wasn’t just avoiding the empty side completely … and, again, that he didn’t always pick the cup next to the one that was empty,” Pepperberg said. “If he wanted that very special candy, he’d have to go to the 50-50 side. A good-enough percentage of the time, he gambled. But what was interesting was that if he lost, he wouldn’t gamble on the next trial.”

Ultimately, Pepperberg said, tests like these don’t only reveal the intelligence of birds like Griffin, but also help shed light on the roots of human intelligence.

“Birds are separated from us by 300 million years of evolution, and their brains are organized differently than ours,” Pepperberg said. “That’s why this was so exciting — because we were able to show that Griffin was working at the level of a 5-year-old, on a task at which even apes would not likely succeed.”

This research was supported with funding from the James S. McDonnell Foundation and donors to the Alex Foundation. 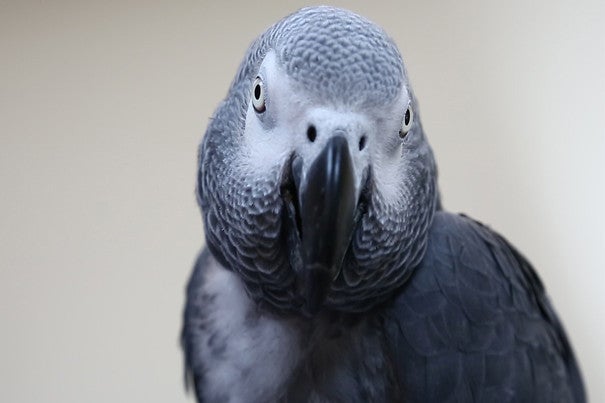 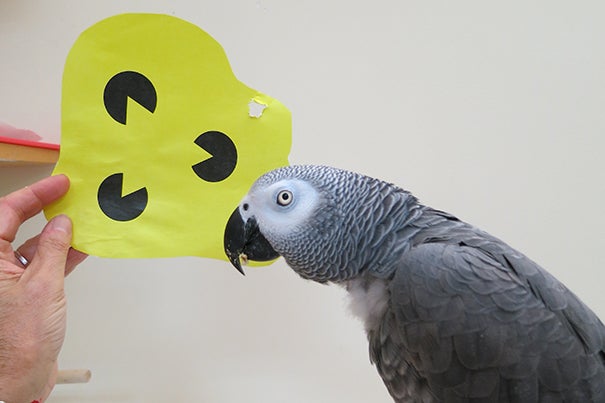 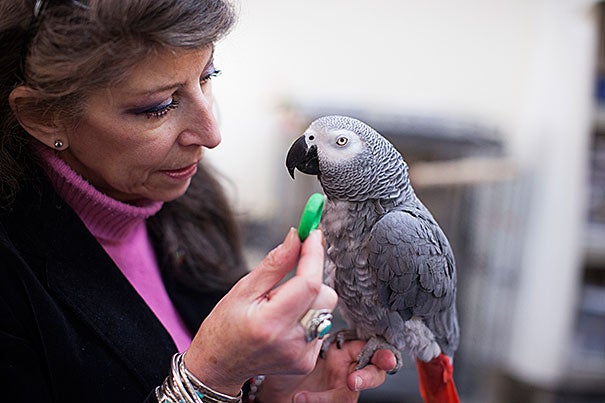