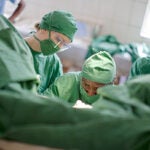 Griffin knows the names of a dozen objects. He can identify five colors and six shapes, and grasps his numbers up to eight. He can ask for his favorite treats and tell you where he’d like to go. And if he likes you, he’ll let you tickle his head.

Obviously, Griffin is not your average student.

In fact, he’s an African grey parrot, one of the stars of a research effort to understand the origins of human intelligence by exploring how parrots learn concepts and communication skills.

“This is a way of looking at the origins of intelligence and communication,” psychology researcher Irene Pepperberg explained. “Unlike apes, our closest relatives, parrots are vocal learners. It turns out that birds have the same number of vocal learning areas in their brains that humans do, though they’re organized somewhat differently. Parrots are separated from us by 280 million years of evolution, so the fact that they can learn to use a simple communication system with us and acquire labels for objects and basic concepts says a lot about how deeply those abilities are embedded in our system.”

Arguably best known for her work with another parrot, Alex, whose intelligence was estimated as equal to that of a 6-year-old child, Pepperberg in recent decades effectively rewrote concepts of animal intelligence and how those findings could shed light on the origins of human intellect. Earlier this year she relocated her lab from Brandeis University to Harvard, where she has continued her experiments with Griffin and a new bird, Athena, who is just 6 months old.

Pepperberg’s most recent research, which was conducted with Harvard psychology Professor Ken Nakayama, showed that Griffin could correctly identify shapes even when they were partly obscured. This capacity likely has its origins in survival abilities — for example, in recognizing a partially hidden predator.

Griffin’s performance is impressive, but can he really stack up to a toddler in terms of smarts?

“We have shown in so many ways that this is not just simple stimulus and response or mimicry,” Pepperberg said. “The people who train the birds are not the people who test the birds. We do blind testing. Too, the birds will respond to almost anyone and to atypical objects.

“If you were in the lab for a half-day, so they were no longer afraid of you, you could probably take a credit card out of your wallet and ask Griffin about its attributes. He could tell you that the shape is ‘four-corner’ and that the color is green. Alex was able to transfer concepts that he learned from one domain to another, so he learned ‘none’ with respect to same and different, and transferred it to size and to quantity.”

In addition to offering new insight into the beginnings of intelligence, Pepperberg believes birds like Griffin can also be a boon for their wild cousins.

“We’re demonstrating that these birds are sentient creatures,” she said. “In terms of conservation, people love to conserve animals that share qualities with humans, so if we can show that these birds — which are an endangered species — are really as smart as a 5- or 6-year-old child, that can help with conservation efforts.”