A ‘Pippin’ of a night 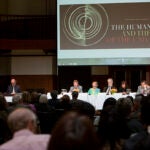 Diane Paulus, artistic director at the American Repertory Theater (ART), took home the coveted Tony Award for best direction of a musical Sunday night for her restaging of the 1970s show “Pippin,” originally by Stephen Schwartz and Roger O. Hirson.

It was the first directorial Tony win for Paulus, who received a best director nomination last year for her production of “The Gershwins’ Porgy and Bess,” and one in 2009 for “Hair.”

During an emotional acceptance speech, Paulus — who was dressed in a one-shoulder, black, floor-length gown — thanked the show’s creators, the Tony voters, the American Theatre Wing, the cast, crew, producers, her family and friends, and singled out her Harvard affiliation.

She paid tribute “to the American Repertory Theater at Harvard University, where Pippin was created, to my visionary board, my tireless staff led by Diane Borger, to the incredible Boston audiences that embraced this production when we first started, and to Harvard President Drew Faust, who says creativity is a form of knowledge.”

Paulus’ work is deeply embedded in the Harvard community. The director also works closely with member of Harvard’s faculty and with students, helps to teach courses, convenes roundtable discussions, and solicits creative input and ideas for works in progress.

Paulus told the Harvard Gazette: “There is no question that the Harvard community has a defining impact on the work that we do at the ART. There is no theater in America that has such an intellectual hotbed at its fingertips as the ART has with Harvard University. Our artistic work is constantly being inspired and informed by the scholarly research and pedagogical inquiry that defines the Harvard community.”

Paulus, who is known for reimagining classic productions and infusing them with fresh energy and direction, did exactly that with “Pippin,” the story of a young man’s search to find an extraordinary life and his interactions with a group of mysterious traveling players along the way. Paulus brought “Pippin” under the big top, incorporating the high-flying moves of the Montreal-based circus troupe Les 7 Doigts de la Main, kneeding in the high-octane choreography of Broadway dance legend Bob Fosse, and producing a show that was a hit with audiences and critics.

Producer Barry Weissler, who accepted the Tony for best musical revival, said the award belonged to a group of “acrobats, actors, and musicians who joined together to make magic on Broadway.” He also credited the ART, “where we began many, many months ago,” and called Paulus a “brilliant director.”

During her acceptance speech, an awestruck Miller called Paulus “a visionary” and thanked her for “giving me this opportunity and believing in me.”

The strong showing creates something of a trend for Paulus and the ART. Last year, its productions of “The Gershwins’ Porgy and Bess” and “Once,” which was developed at the ART, took home 10 Tonys, including the prizes for best musical revival and best musical, respectively.

In addition to Paulus ’88, other Harvard alumni also were front and center at the Tonys. “Vanya and Sonia and Masha and Spike,” written by Christopher Durang ’71, was named best play. Another winner was Courtney Vance ’82, who took home the award for best featured actor in a play for his turn in “Lucky Guy.”