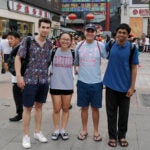 The natural world is full of examples of what biologists call convergent evolution — instances where unrelated creatures developed similar traits in response to similar evolutionary pressures.

But can that convergence include the interactions of different species that evolve under similar conditions?

As part of a study conducted while she was a graduate student in the labs of Naomi Pierce, the Sidney A. and John H. Hessel Professor of Biology, and Anne Pringle, the Vilas Distinguished Professor of Botany at the University of Wisconsin, Madison, Bittleston found that the “miniature ecosystems” housed in pitcher plants from opposite sides of the world are strikingly similar, suggesting that there may be something about the plants themselves that drives the formation of those communities. The study is described in an Aug. 28 paper published in eLife.

“These plants, the Nepenthes in Southeast Asia and Sarracenia in North America, evolved completely independently … and because they’re like little aquatic islands, they can be used as model systems to study community ecology,” said Bittleston, now a postdoctoral fellow at the Massachusetts Institute of Technology. “They have a whole little microcosm inside them — even though they eat insects, there are aquatic insects that can only survive in pitcher plants, but there are also aquatic mites, protozoa, rotifers, fungal yeasts, and bacteria.”

To capture an image of that community, Bittleston, Pierce, Pringle, and their collaborators from the Universiti Malaysia Sabah and the University of Malaya turned to a process called DNA barcoding, which uses a short section of DNA to identify different species.

“One way I think this is novel is it’s the first time we’re looking at the whole community inside a host, and not just one taxon group,” Bittleston said. “We wanted to capture the entire community that lives in these plants.”

When the team compared more than 300 samples of those communities, collected from pitcher plants in Borneo, Singapore, the Harvard Forest, and along the Gulf Coast, they found surprising similarities.

When they narrowed their focus and examined different species of pitcher plants from the same genus that grew near one another, the group found some evidence that the species of plant might influence which species were present, but Bittleston said other factors — like the acidity of the liquid — might also be involved.

“We were able to extrapolate a bit and say that we think these organisms are colonizing pitchers on different sides of the world because the pitchers have similar shapes — they have this convergent form and they have this convergent function of trapping and digesting insects,” she said. “And they also probably have some similarities in terms of the chemical conditions inside the pitchers.”

In a follow-up experiment, Bittleston transported a number of Southeast Asian pitcher plants into the Harvard Forest alongside native species and glass tubes, some of which were empty and some of which had insect material in them — and the results were startling.

“Basically, we found that the Southeast Asian plants, when they opened and were colonized by communities in North America, they were very similar to the local communities,” she said. “The local community recognized it as a host.”

Arguably the most striking example of how the local community accepted the Southeast Asian plants, she said, came in the form of the pitcher plant mosquito, Wyeomyia smithii, which is only found in North American species.

“But we found larvae growing in these pitchers — and we even found pupae, which meant they were able to complete their life cycle,” Bittleston said. “There weren’t as many of them, but they still recognized them as hosts. It was really interesting that when you bring something these mosquitoes have never seen before, and they recognized it as a place where they can live.”

The finding supports a theory, outlined by Bittleston in a 2016 paper, that suggested that, just as convergent evolution might produce similar traits in unrelated species, “convergent interactions” might lead to similar relationships between species.

As an example, Bittleston pointed to ant plants, which, though unrelated, evolved similar structures that provide nesting site for ants. The ants in turn protect the plants from herbivores.

“Convergent evolution has always compared individuals, but I think there is something fundamentally different about an interaction evolving,” she said. “It can tell us about how natural selection might be acting on those species interactions. The way we think of it is that there may be certain interactions that represent fitness peaks.” 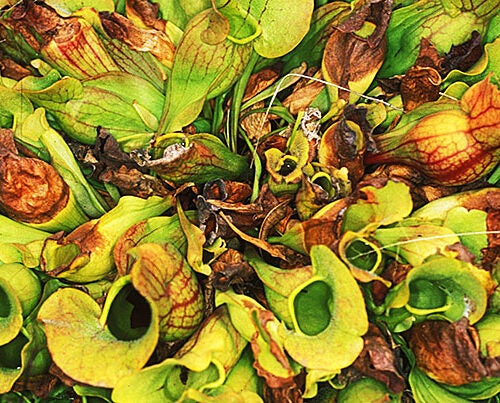 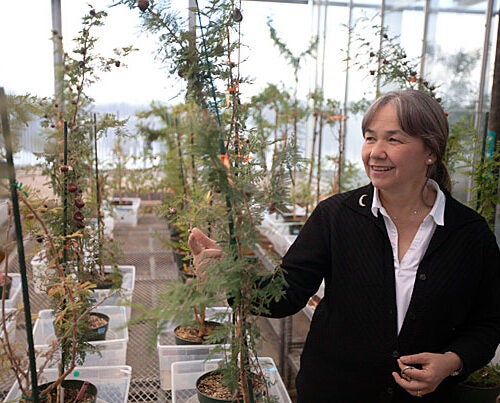 Using genetic tools, Bittleston, Pierce, and Pringle also examined the functional genes in the pitcher plant community, and found several that are related to breaking down amino acids and proteins, potentially making nitrogen available to the plants. Other genes, Bittleston said, were related to the production of chitinases, enzymes capable of breaking down the chitin found in insect exoskeletons.

Going forward, Bittleston said, her work at MIT is focused on bringing the pitcher plant ecosystem into the lab to gain a deeper understanding of how the different bacteria found in the liquid interact with each other.

“Part of what I want to understand is the complexity in ecosystems,” she said. “We still don’t really know why communities form and how different species interact within communities, so some of the experiments I’m doing now are trying to get at those questions more in depth.”

Ultimately, Bittleston said, the study offers important insight into how ecosystems form and how evolution can act on a community of organisms to bring different species together in certain ways.

“What I think we need right now is better ways of understanding ecosystems, because we’re in this changing world, and we’re trying to figure out how to manage them, or at least not destroy them,” she said. “So to get a better idea of how ecosystems form, and what sort of factors might control who’s there and how they’re interacting, that’s useful.”