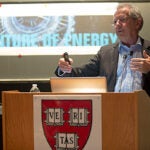 Most of us want to swim in a lake where we can see our toes. Clear, oxygen-rich water supports not only human swimmers, but also intricate webs of animal and microbial life. That life can be disrupted when too many nutrients — from fertilizers, pollution, and other factors — overload the system. In those cases, aquatic ecosystems can cross a tipping point: the nutrients cause algae to bloom, and the extra bacteria eating the extra algae use up all the oxygen in the water. The end result is a murky, green lake that is difficult to restore, despite herculean interventions.

Promising new research out of the Harvard Forest, funded by the National Science Foundation and published today in the Proceedings of the National Academy of Sciences (PNAS), offers insights on how and why these tipping points occur. “The first step to preventing tipping points is to understand what causes them in the first place,” said Aaron Ellison, senior ecologist at the forest and co-author of the study, “and for that you need an experiment where you can demonstrate cause and effect.”

In the PNAS study, the Harvard research team demonstrated how to reliably trigger tipping points by continually adding a set amount of organic matter — comparable to decomposing algae in a lake — to a small aquatic ecosystem.

But the team did not conduct their experiments in lakes or ponds. Instead, they worked in the tiny confines of pitcher plants: carnivorous plants native to eastern North America. Each pitcher-shaped leaf holds about a quarter of an ounce of rainwater; inside is a complex, multilevel food web of fly larvae and bacteria. “The pitcher plant itself is its own little ecosystem,” said Jennie Sirota, an undergraduate at North Dakota State University and lead author of the PNAS study. Sirota led the field and lab components of the study as an intern in the Harvard Forest Summer Research Program.

Similar to lake ecosystems, oxygen levels inside the water of a pitcher plant are controlled by photosynthesis and the behavior of resident organisms — in this case, mostly bacteria. According to Ellison, doing an experiment with bacteria is like fast-forwarding through a video: “A bacterial generation is 20 minutes, maybe an hour. In contrast, fish in a lake have generation times of a year or more. We would need to study a lake for 100 years to get the same information that we can get from a pitcher plant in less than a week,” he explained. “The same mathematical models can be used to describe either a pitcher plant ecosystem or a lake.”

To approximate a nutrient overload in the pitcher-plant water, the team fed the plants set amounts of ground-up wasps, “equivalent to a 200-pound person eating up to either one or two McDonald’s quarter-pounders every day for four days,” said Ellison. Surprising to the researchers was the consistency of the tipping points they created. In pitcher plants where high densities of ground-up wasps had been added, an ecosystem tipping point reliably occurred around 45 hours after the start of feeding.

Now that they have a way to create tipping points, the researchers’ next step will be to identify the early warning signs before one occurs. “Tipping points may be easy to prevent,” Ellison said, “if we know what to look for.”