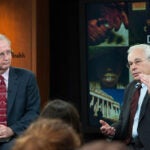 “When I was growing up I thought plants were boring,” Pierce said in a recent talk at the Harvard Museum of Natural History, part of the “Evolution Matters” lecture series. “I had the notion that plants were just there being eaten,” when in fact, their interactions with insects define the world as we know it.

Take orchids and bees. An orchid attracts bees with nectar, and finds ways to attach pollen to just the right place on the insects as they feed. When the bees later fly to female orchids, pollination is completed. Both parties benefit.

Or consider the lesser-known case of the Lycaenid butterflies that feed on Australian mistletoe and the herding ants who guard their caterpillars “almost as if they were their own brood,” in exchange for nutritious secretions, said Pierce.

Pierce’s lab is also interested in interactions between ants and their gut bacteria, or microbiome. “We were looking at bacteria that was specialized to live in these ants,” she said. The symbiotic bacteria likely made it possible for the ants to become herbivores that could thrive in the protein-poor canopy of rain forests, she said.

Pierce found that in the cases of bees and orchids, and ants and butterflies, one group evolved long before the other, suggesting that one provided a “template” of ecological opportunities for the diversification of its partner.

“These specialized interactions between coevolving organisms are very often asymmetrical,” she said. One evolves over time, then the other. But one could not evolve without its counterpart.

“But so what?” asked Gabriel Miller, a postdoctoral fellow who researches ant/butterfly/host-plant relationships in the Pierce Lab. “People say, ‘So why are ants interesting and useful to study?’”

Pollination services are worth billions of dollars annually in crop production, for example. The importance of these relationships is well illustrated by dramatic crop losses due to the widespread colony collapse disorder (CCD) of pollinating honeybee colonies. Similarly, cooperative interactions between humans and their gut microbes play an important role in health.

And fall apart they do. An outstanding question in evolutionary biology is how cooperation can evolve in the face of potential cheating, Pierce said. There are many cases in the evolution of Lycaenid butterflies in which caterpillars go rogue. They mimic the chemical signals of their attendant ants and are taken by the workers into the ant nest, where the caterpillar becomes a “wolf in sheep’s clothing,” feasting on the helpless brood. In almost all cases, Pierce said, parasitic interactions like this evolved in groups where all other members were involved in close, mutually beneficial relationships.

The implications of this kind of cheating reach far and wide.

Pierce recently collaborated with Harvard economists Drew Fudenberg, Jerry Green, and Glen Weyl (who is now at the University of Chicago) to use economic models to investigate what conditions can favor the evolution of cooperation in the face of potential cheating.

“This is one of many examples where basic evolutionary research can benefit from economic theory,” said Christian Rabeling, a Pierce Lab postdoctoral fellow. The growing field of neuroeconomics is based on biological insights into our behavior, added Rabeling, who specializes in the evolutionary biology of social insects.