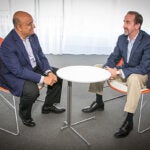 In Q&A session, Bill Lee, senior fellow of the Harvard Corporation, outlines the search for a new leader, and the qualities desired

After serving a decade as president of Harvard University, Drew Faust announced last week that she will step down on June 30, 2018. A collegial and unifying figure known as both a decisive leader and a good listener, she is the only president many members of the Harvard community have ever known. But change is now on the horizon.

To discuss both her legacy and the future, the Gazette spoke with Harvard Corporation Senior Fellow Bill Lee, who was a member of the Board of Overseers from 2002 to 2008 and has been a member of the Corporation since 2010. Lee was one of the three Overseers on the 2006–2007 presidential search committee that selected Faust. In a letter to the Harvard community immediately after Faust’s announcement, Lee praised the president who “approached every day with a singular purpose: to ensure that Harvard remains the pre-eminent academic institution in the world by constantly driving Harvard forward.”

In a Gazette Q&A session, Lee discussed Faust’s plans for her last year, her decade of achievements, the search for her successor, and the challenges facing Harvard in maintaining its momentum at the forefront of higher education.

GAZETTE: In her letter to the Harvard community, President Faust emphasized the importance of using the coming year to “advance our shared purposes.” Can you speak to what those priorities will be?

LEE: She has identified them, and they have been consistent: her focus on One Harvard and on institutional collaboration and cooperation across the University; her intense focus on the funding and support of research and scholarship across all academic areas, particularly at this moment in our history; the focus on continuing to ensure that Harvard is a community open to diverse and interesting faculty, students, and staff; and ensuring that once members of our community are here, Harvard is a place that is welcoming and good for them as well. Of course, there is also the priority of continuing the capital campaign. We have terrific momentum, we are well beyond our goal, but Drew is committed to the successful completion of the campaign and to ensuring that all of the different priorities of the Schools are fulfilled as best they can be.

GAZETTE: You mentioned The Harvard Campaign. What does that strong fundraising effort under her leadership — $8 billion raised thus far with another year to go — mean for Harvard moving forward?

LEE: I think the result of the capital campaign to date reflects three things. First, it reflects enormous confidence in what Drew has done as the leader of the University. Second, the magnitude of the contributions to date and the breadth of the contributions across the different Schools reflect the deep commitment of many people, including alumni, friends, and others, to the mission of Harvard. Third, we have been able to achieve campaign goals in critical areas, such as raising $2.9 billion for the sciences, including gifts to rename what have become the Harvard Paulson School of Engineering and Applied Sciences and the Harvard Chan School of Public Health. But there are other important campaign priorities that remain to be satisfied, such as House renewal and a wide range of priorities across the Schools. And, with the federal government threatening to decrease funding for the cutting-edge research that Harvard has always done, endowment support for that critical part of the University’s mission has become even more important.

GAZETTE: One Harvard, President Faust’s commitment to fostering collaboration across the College and the University’s professional Schools and programs, has been an important part of her mission as president. Why do you think that effort has been so critical and successful?

LEE: For many decades, Harvard has had many great parts — but Harvard as a whole was less than the sum of its parts. Historically, we flourished by being “every tub on its own bottom.” But for Harvard to be everything that it can be in this new era, a new model was required. Harvard was going to have to collaborate, cooperate, and integrate in a way it hadn’t done before. Drew recognized this and made One Harvard a core principle of her vision. She then put in place a set of deans who had the same vision for Harvard and who were prepared to lead their Schools by collaborating and cooperating. The deans she selected are not only eminent scholars and leaders in their fields, but also people dedicated to Harvard more broadly. The efforts and initiatives of Drew and these deans have resulted in more creativity, more innovation, more collaboration, and more cooperation. Drew also used some of her funds at the center of the University to help support programs that would foster integration across the whole. I think it’s a combination of all those things that has contributed to progress toward One Harvard. 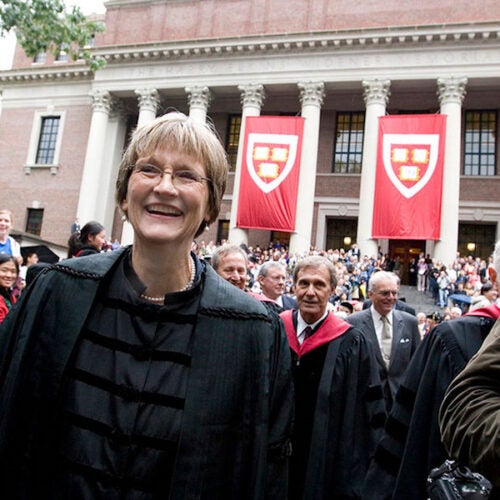 GAZETTE: What are the kinds of qualities that President Faust has brought to the job that you will be looking for in the next leader of Harvard?

LEE: Drew has a special combination of vision, character, integrity, the ability to execute, and the ability to communicate. She is, of course, a wonderful writer and speaker. But, more importantly, she has the ability to listen to a wide range of voices and perspectives from a diverse set of constituencies. We hope the new president will have those qualities because they are critical to effective leadership. Thanks to Drew, we are in a position of real strength. We hope and expect the next president will have many of the same leadership qualities, and will build upon the momentum that Drew has created. But we also hope and expect that the next person will be someone who can, as Drew has, look forward 10 or 15 or 25 years, imagine what Harvard needs to be then, and begin to take the steps to ensure that Harvard will be the eminent institution it is today.

GAZETTE: What can you tell me about the process of looking for her successor?

LEE: As an Overseer, I was part of the search process that led to Drew’s being chosen as president in 2007. It was a robust process that allowed us to connect with a wide variety of members of the Harvard community, as well as a broad range of leaders in higher education. We thought it was successful. We intend to have a process that does much the same this time.

We will be reaching out widely to the larger community. In the last search, we created two advisory committees, one of faculty, another of students, both including members from across the University. They were enormously helpful by providing us advice, gathering information, and reaching out to others with different perspectives and ideas. The model worked very well last time, and I would expect that we would have the same type of committees and that we’ll work with them in the same close manner.

Beyond the advisory committees, the members of the search committees will be spending a lot of time communicating directly with a range of faculty, students, staff, and alumni about what they view to be Harvard’s strengths, what they view to be Harvard’s challenges, and what they would like to see in a new president. We’ll write to the whole community this summer to invite advice and nominations. And we’ll be having many confidential conversations with individuals and groups to hear their views — people inside Harvard, obviously, but also leaders in higher education and others outside Harvard who can give us a fuller picture and make sure we’re seeing things from the outside and not just from within. When we did our outreach last time, hundreds of people responded and provided useful information. That very much informed not just the choice of a president, but our sense of Harvard’s directions and possibilities for the future.

At least from my perspective, Drew’s performance and leadership over the last 10 years are a pretty good indication that the process that we used then worked pretty well.

GAZETTE: Looking forward, in your mind, what are the biggest challenges still facing the University?