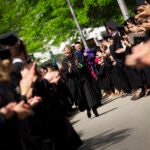 Drew Faust to step down as Harvard president

Since taking office in July 2007, Harvard President Drew Faust has spearheaded a sweeping expansion of financial aid, opening Harvard’s doors to many more qualified applicants, and has championed increased diversity and inclusivity on campus. She oversaw the re-establishment of ROTC programs, the creation and naming of the Harvard John A. Paulson School of Engineering and Applied Sciences, and the launch of the record-setting Harvard Campaign. She promoted innovation in the ways the University pursues teaching, learning, and research across fields and disciplines, and she shepherded the “One Harvard” approach to collaboration and excellence among Schools and programs. Under her tenure, the University expanded its global impact while renovating and reinvigorating its physical spaces at home, with improvements ranging from the Harvard Art Museums to the Smith Campus Center to the residential Houses, along with imagining and beginning major campus additions in Allston.

Faust announced that she will step down as president on June 30, 2018. Here are some memorable moments from the last 10 years.