Yalies by the dozen 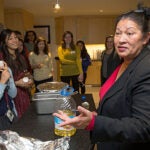 With The Game at Harvard, two campuses merged into one

It was bound to happen, yet no one saw it coming. In a year of seismic surprises, it made perfect sense that Harvard lost to Yale, 21-14, on Saturday in the 133rd meeting in a football rivalry so history-laden that it is simply called The Game.

By Friday evening, Yale students spilled into Cambridge by the busload. Campus doubles became quads, and quads became rooming houses, the rivalry giving way to communal celebration. The night’s festivities revealed the friendly character of the Harvard-Yale relationship, as students of both schools came together to revel. As the night came to an end, any accessible hallway, common space, or suite saw Yalies camp out by the dozen.

Saturday morning seemed no different than prior pre-Game Harvard-Yale festivities, with students and alumni filling the Yard, faces painted with temporary tattoos and a bit of smugness among the Harvard crowd bred from nine consecutive Crimson victories. At this point, we had no idea that our presumptive victory would morph into a crowd-hushing, fourth-quarter debacle. Trading trash talk and dirty looks, the H’s and Y’s migrated toward the stadium to watch the Ivy battle of the titans.

On desktop, click and drag your mouse for 360° views. On mobile, use the YouTube app to watch these videos, and move your phone to explore. With a headset, such as Google Cardboard, use the YouTube mobile app to load the video and look around.

The stadium boasted a sell-out crowd of more than 30,000. As we made our way into the stadium’s packed student section, The Game was already underway, and school spirit was in full swing. The concrete vibrated under our feet with each chant.

Yet the intense rivalry occasionally gave way, revealing the deeper meaning of this time-honored tradition. I met a group of Crimson freshmen attending their first game, their collective excitement bursting from the seams of their Harvard sweatshirts. Students and alumni are bound together by this rivalry’s magic, the product of more than a century of competition. The feeling was strangely the same, emanating from alumni attending their 10th, 20th, or even 30th Game. Engaged in polarizing chants and boastful trash-talk, students also utilized their engineering skills in creating a fleet of paper airplanes made from football programs that rained down on the crowd and the field.

At the end of the third quarter, the stadium turned its focus to a Yale tradition involving its Saybrook College: the “Saybrook Strip.” Dating back to the 1970s, this tradition dictates that students of Saybrook take off their clothes at the end of the third quarter to garner support for the Bulldogs. This year that move delayed play on the field, as onlooker gasps gave way to snickers. Yet it just may have been the strip that turned the game for the Bulldogs.

From foam fingers and face paint to now-tight alumni sweatshirts that the wearers insisted still fit, the Crimson showed their pride and expected another win, but it was just not meant to be.

After the surprising loss, Crimson fans left dejected. For us, it was the first time we could reflect on the significance of this tradition in a way only those on the losing end can appreciate. For the first time in 10 years, Crimson fans had to appreciate history rather than victory, and prepare for the compulsory 365 days of taunting to follow.

After futile attempts to escape the Bulldog celebration, our crestfallen student body returned to our dorms, Houses, and lives, as well as cramped rooms and hallways. However, by sunrise Sunday the exodus had begun. With virtually all traces of The Game eliminated by the afternoon, the only signs of its existence were overflowing trash bins, several trodden football programs, and disappointment.

Ultimately the loss gave way to a tacit appreciation and respect for the history that built this rivalry we enjoy each year. Indeed the tradition will continue, beyond my remaining time at Harvard, into the future when I hope someday to be the old guy with the foam finger laughing at the “Saybrook Strip.” But before that, I might be the senior who rushes the field one final time at the Yale Bowl in 2017.