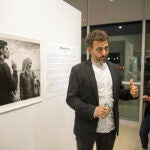 Harvard President Drew Faust has awarded a second cycle of grants to faculty through the Harvard Global Institute (HGI), which was established last year. In this grant cycle, the five awards span the Faculty of Arts and Sciences, the Harvard T.H. Chan School of Public Health, and the Harvard Kennedy School, and multiple disciplines.

HGI grants are designed to support research initiatives that develop innovative solutions to global problems by drawing on collaboration of faculty within Harvard and with colleagues overseas. The current grants target interdisciplinary research on issues of particular salience to China and of relevance to other parts of the world. Both small and large categories of grants are awarded, valued at a maximum of $100,000 and $1 million per year, respectively.

In this year’s funding cycle, a two-year grant was awarded to Peter Huybers, professor of Earth and planetary sciences and of environmental science and engineering. His project, “China’s Health Weather: Understanding and Predicting Connections Amongst Climate, Extreme Weather, Air Quality and Health Consequences,” is co-led by faculty with extensive expertise in climate, weather, atmospheric chemistry, and public health. The team seeks to understand and predict how climate affects “health weather” in China, including conditions that might affect the populace.

Exploration of acute “health weather” events will be pursued through diagnosing relationships among large-scale climate patterns, effects on local weather, air pollution, and health consequences. This understanding of current acute conditions will then be merged with projections of climate change to provide information about changes in chronic “health weather” over the coming decades.

Developing such a causal understanding of how climate change dynamically influences weather and human health is a challenge of great urgency to China. The approach combines theoretical investigations, model simulations, observational analyses, and field studies. Collaborations with Chinese scholars, joint symposia, and student exchanges should foster China-Harvard connections and aid in meeting this grand challenge.

Four of the projects are funded at the small-grant level. The first of those is led by principal investigator Bernardo Lemos, assistant professor of environmental epigenetics at the Harvard T.H. Chan School of Public Health. In collaboration with a recent alumnus of his laboratory, Jianlin Lou, who is also vice dean at the Institute of Occupational Disease of the Zhejiang Academy of Medical Sciences, the project will investigate epigenetic alterations in Chinese factory workers as well as their children.

Individuals working in electroplating plants in China display blood chromium concentrations that can be 20 times greater than in the general population. These individuals also present higher than average blood levels of lead and other metals. Lemos’ project will examine pathways that are likely to be disrupted in individuals exposed to heavy metals and that are also likely to contribute to the transmission of disrupted epigenetic states in the children of exposed workers. This work will help address the global burden of environmental and occupational exposure to toxicants.

A grant was awarded to Naomi Pierce, Sidney A. and John H. Hessel Professor of Biology, who is a faculty member in the Department of Organismic and Evolutionary Biology at the Faculty of Arts and Sciences. In collaboration with Douglas Yu at the Kunming Institute of Zoology, Pierce will use DNA sampled from parasitic invertebrates (iDNA) to detect and track expansion and contraction in a full range of vertebrate species. Range size is an index of population size, so measuring range expansion and contraction will provide indicators as to whether populations are growing or declining.

In the Ailaoshan nature reserve in Yunnan, China, the team will systematically collect leeches and, by sequencing the iDNA from their blood meals, will be able to detect the presence or absence of mammal species. This data will be coupled with “occupancy” modeling to estimate range maps for different groups. The investigators will validate these methods using standard monitoring, including camera traps, mosquito iDNA, and visual censuses. The outcome should provide an efficient method for measuring whether nature reserves are able to protect their vertebrate wildlife, and this method can be adapted and applied to reserves across China and around the world, because sources of iDNA are available everywhere.

Robert Stavins, Albert Pratt Professor of Business and Government, was awarded funding for a project called “Reducing Greenhouse Gas Emissions: International Cooperation in East Asia.” The project will build on previous collaboration between the Harvard Project on Climate Agreements, a University-wide initiative based in the Harvard Kennedy School, and the National Center for Climate Change Strategy Research and International Cooperation (NCSC) in Beijing. The Harvard Project and NCSC previously studied and communicated options for ongoing collaboration between China and the United States to address climate change, and are currently exploring approaches to design and effectively implement China’s national greenhouse-gas emissions trading system, scheduled to launch late next year.

Stavins’ project will study the potential for broader cooperation to address climate change among East Asian countries. It will focus to a considerable extent on approaches to “linkage” among emissions-trading systems in the region, which have the potential to lower costs of emissions reduction and thereby support more ambitious reductions. The principal activity will be a research workshop and policy roundtable in Beijing next summer. Participants are expected to include researchers and practitioners from South Korea and to some extent from other countries in East Asia.

Faust also awarded a grant to Ya-Wen Lei, assistant professor of sociology. Her project, “Adequate Housing and the Welfare State,” will examine struggles for adequate housing in urban China and India. Access to adequate urban housing remains a pressing global issue. The challenge is especially daunting for the two nations given their huge populations, as well as their still ongoing processes of urbanization and rural-to-urban migration. Both China and India, the world’s largest authoritarian and democratic countries, respectively, have come up with ambitious national policies to cope with their urban housing problems. Early evidence has revealed significant differences between the two states in terms of policy formation and implementation. Lei’s project seeks to explain how political regime, economic development, and social organizations shape provision of adequate housing.

HGI will begin accepting expressions of interest for the next grant cycle in early 2017. Additional information can be found on the website.