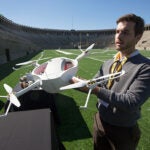 What drones can do

The grant to a project led by atmospheric scientist Michael McElroy, the Gilbert Butler Professor of Environmental Studies, and economist Dale Jorgenson, the Samuel W. Morris University Professor, provides $1.25 million annually for three years and can be renewed for two more.

The new initiative will involve a wide range of activities, including research, public lectures, conferences, research symposia, a research seminar series, policy consultations with decision-makers, public outreach, and a summer course in China for undergraduate and graduate students.

The project’s central focus will be its research agenda, joining with Chinese collaborators to explore the intersections of diverse fields. A core group of studies will leverage Harvard’s strengths in energy science, atmospheric chemistry, and climate science. Another will link economics, engineering, atmospheric science, and environmental health in national policy assessments. A third will track urban transportation, air quality, and associated risks to human health in a case city, Chengdu. The project will also seed work in social sciences, history, and Chinese environmental and climate law.

McElroy said the project, China 2030/2050, has a long-term horizon because in many ways what happens in the near term already has been determined by investments in long-lived power plants and other energy-related infrastructure built or under construction. It is in the 20 years after 2030, he said, that innovative thinking and planning could allow a more fundamental transition to a non-fossil fuel economy to take place.

Jorgenson said the project’s economic research will focus on issues important to China today, such as the effort to design and implement a cap-and-trade program for carbon dioxide, announced by President Xi Jinping during a visit to Washington last month. Jorgenson said the researchers plan to work closely with Chinese colleagues, including those at think tanks that influence policymakers, as well as with an interdisciplinary group of economists here at Harvard.

Though the project’s direct focus is on China, McElroy pointed out that climate change is a global issue, and what happens there in the coming decades will also affect the United States and other nations, just as what happens in the United States will affect China. Jorgenson added that the solutions devised in China 2030/2050 could eventually help other large, rapidly developing and urbanizing nations, such as India and Brazil.

The project’s broad, interdisciplinary thrust is by design, Jorgenson and McElroy said. It will involve 17 faculty members from five Harvard Schools, a similar number from Chinese universities, and as many as 100 students, visiting scholars, and postdoctoral fellows from both countries.

The funds will come from the Harvard Global Institute, which was established at the recommendation of a faculty committee on Harvard’s international activities and further refined by the work of the Faculty Advisory Committee on Global Institutes. The initial committee recommended against establishing a large physical presence — such as an overseas campus — for the University abroad, but acknowledged that some issues will require a greater level of engagement with each region and with Chinese scientists expert in local aspects of the problems. The result was the institute, whose launch was made possible through the support of Wang Jianlin, chairman of Beijing-based Wanda Group and which will provide larger grants to projects involving teams of established faculty members and smaller grants to single faculty members exploring more experimental topics.

“Harvard University has been inherently global since its founding,” Harvard President Drew Faust wrote in a letter to faculty members announcing the new institute and the inaugural grant. “Today, knowledge is increasingly shared across national boundaries, and challenges must be understood in their broadest geographic context.  In order to fully participate in an ever-more-connected world, Harvard must leverage its extraordinary intellectual and programmatic strengths with a more-intentional strategy of engagement, ensuring the highest quality and impact for our teaching and research in the decades to come. One way in which I hope to achieve this important goal is with the creation of the Harvard Global Institute.”

The institute’s grants are intended to foster research into topics that transcend disciplinary and regional boundaries, such as climate change, urbanization, education, water, and migration.

McElroy and Jorgenson said the new grant provided an important boost for China 2030/2050 and expressed appreciation that University officials support this kind of major, cross-disciplinary effort.

The new initiative, which McElroy said owes a great deal to the efforts of Chris Nielsen, executive director of the Harvard China Project, represents an “evolution” of the long-running interdisciplinary initiative, which envisions a significant international presence for Harvard faculty and students. McElroy said Harvard’s Shanghai office is a potential site for consultations between the University and Chinese scientists and policymakers, which could include symposia and off-the-record briefings.

McElroy expects the effort to get up and running this year, aided by a network of about 150 Chinese scholars who have studied at Harvard under the China Project’s auspices or collaborated with Harvard scholars on research. He expects the first cohort of students to visit China this summer. Other components, such as public lectures and research symposia, will begin this academic year.

“I expect to start moving on this very quickly,” McElroy said.