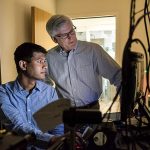 Study provides up-close insight on connections between retina and thalamus

Crack open just about any biology textbook to read up on the thalamus, and you’ll find that its function is mainly to serve as a relay station, handing off sensory input to the cerebral cortex for processing.

But when a pair of Harvard researchers took a closer look at the connections between the retina and thalamus in mice, they found a very different story.

By creating highly detailed neural wiring diagrams, Jeff Lichtman, the Jeremy R. Knowles Professor of Molecular and Cellular Biology and Santiago Ramón y Cajal Professor of Arts and Sciences, and postdoctoral fellow Joshua Morgan showed that the neural networks that connect the retina and thalamus are far more complex than initially believed, and may even represent the first stage in processing visual information learned by experience. The study was described in a paper recently published in the journal Cell.

“If you go just one synapse deeper than a highly ordered structure like the retina, you see an explosion in complexity,” Lichtman said. “Rather than having a pathway associated with one retinal axon type, and another pathway associated with another cell type, we saw a completely intermixed network — each retinal cell diverged to contact different kinds of thalamic cells, and each thalamic cell received convergent information from many different types of retinal cells.”

That convergence is particularly important when you consider how retinal cells work.

The output of the retina is divisible into sets of specialized nerve cells, with each set tuned to respond to particular kinds of visual sensations: some detect color, others are tuned to movement, and still others distinguish fine details in the visual scene.

By feeding input from several kinds of retinal cells to a single thalamic cell, the brain can begin to combine visual information and form an image of the larger world, Lichtman believes.

“For example, a rodent living outside might have cells that respond to a black spot moving on a blue background, because that might indicate a predator,” he said. “Everyone had said this should exist somewhere in the brain, but it may be if you just go one synapse further in than the retina … you suddenly find these types of intermixed connections.”

The exact structure of those networks is forged early in development, and is almost certainly unique for each individual.

“I’ve always imagined that something like that would be the case, but I never expected to find it in the thalamus,” Lichtman said. “We thought we might see how, through development, you generate very clear pathways, but this suggests that as soon as it can, the nervous system starts to build circuits that are very specific to the individual.”

In fact, he said, the study was initially focused on the thalamus because the researchers expected it to be relatively simple to examine.

“We expected this to be straightforward,” Lichtman said. “Our secret agenda was that we would look at this in adults, and then we would go back in development and see how it became so crystalline that each different pathway in the retina became channelized to different cells.”

To understand the connections between the retinal and thalamic cells, Lichtman and Morgan created the largest-ever electron microscopy data set on neural connections in the brain ???? 100 terabytes, consisting of 100 trillion pixels.

Using a system that automatically cuts and scans wafers of tissue, Morgan, the first author of the study, imaged the brains of mice, then traced how thalamic neurons were connected to retinal neurons.

“What he did was to take four tightly clustered cells in the middle of the thalamus, and for each of them, he found the cohort of retinal axons that contacted them, and also the cohort of other thalamic cells driven by those same axons,” Lichtman said.

The findings, he said, have the potential to challenge a number of core tenets of brain science.

“For example, there is a focus, through the Obama BRAIN Initiative and other efforts, on determining how many cell types there are in the brain,” Lichtman said, referring to the Brain Research through Advancing Innovative Neurotechnologies plan. “We found distinctly shaped cells in the thalamus, each of which is considered a different cell type. But we found that the shape of the cell did not predict what it was connected to, meaning that even cell type, this fundamental pillar of biology … may be aiming in the wrong direction.”