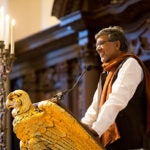 When George Ledlie, Harvard Class of 1884, died in 1927 he left Harvard a $1,000 bequest with very specific instructions: The income generated by the gift was to “be paid not oftener than once in every two years as a prize to a person in any way connected with said University, who, in the judgment of said University since the last awarding of the said prize, has by research, discovery or otherwise made the most valuable contribution to science, or in any way for the benefit of mankind …”

This year, Harvard Provost Alan M. Garber has announced that Professor Joanna Aizenberg, whose work across a number of chemical, engineering, and biological fields has had a positive impact on myriad areas of human endeavor, has been selected to receive the George Ledlie Prize. Aizenberg joins a roster of scientists who have been honored for a vast array of scientific breakthroughs and advances.

Aizenberg, said Garber, “has had a remarkable impact not only on the world of science through her research, but also on the entire Harvard community through her exemplary teaching, mentoring, and energy.” He said her research “is truly cross-disciplinary, spanning applied physics, bioengineering, and materials and mechanical engineering.”

“It’s amazing,” said Aizenberg, the Amy Smith Berylson Professor of Materials Science in the Harvard John A. Paulson School of Engineering and Applied Sciences, a professor of professor of chemistry and chemical biology in the Department of Chemistry and Chemical Biology, and a founding core member of Harvard’s Wyss Institute for Biologically Inspired Engineering. “I am really truly honored. Seeing my name alongside the incredible scientists who have been winning this award over the years, and knowing that it’s a general science award, makes me feel proud and happy,” she said.

Previous winners of the Ledlie Prize include Judah Folkman, who was cited for his pioneering work in cancer antiangiogenisis; Robert Burns Woodward, the first recipient, for his research into the analysis and synthesis of everything from quinine to LSD; Douglas Melton, co-founding director of the Harvard Stem Cell Institute and Harvard’s Xander University Professor, for his pioneering work in diabetes; physicist Lene Hau, for her work slowing light; and Michael Brenner, Glover Professor of Applied Mathematics and Applied Physics at the Harvard Paulson School, for research that focused primarily on theoretical modeling in physical sciences and engineering.

In his letter nominating Aizenberg for the prize, Francis J. Doyle III, the John A. Paulson Dean of Harvard Paulson School and John A. and Elizabeth S. Armstrong Professor of Engineering and Applied Physics, wrote that she “has distinguished herself as a leading researcher in a wide range of areas including biomineralization, self-assembly, crystal engineering, and bio-optics. Her contributions to each of these research domains continue to advance the body of knowledge while leading to highly practical applications in varied industries.

“Over the past eight years,” he continued, “Professor Aizenberg’s research has focused on understanding how biology solves complex problems in the design of functional inorganic materials. As an innovator in the rapidly expanding field of biomimetic inorganic materials synthesis, she uses these biological principles to develop new nanofabrication strategies that have led to the development of advanced materials and devices with applications in energy, transportation, medicine, among other sectors.

“Beyond her research activities, Professor Aizenberg excels as a teacher and mentor,” Doyle noted. “In addition to the materials science courses she teaches at SEAS, she also guest lectures at the Graduate School of Design [GSD] on new breakthroughs in the use of adaptive materials and nanoscale technologies. Her lectures emphasize the narrowing gap between materials scientists and designers. She also was a member of the SEAS faculty team that, with GSD colleagues, conceived and designed the newly launched master’s in Design Engineering program.

“In conclusion,” wrote Doyle, “Joanna Aizenberg’s pathbreaking contributions to several research areas, her leadership of interdisciplinary research centers, and her dedication to teaching, mentoring, and advancing scientific discovery make her an exceptionally deserving candidate for the Ledlie Prize.”