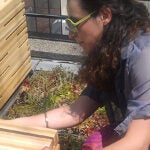 The new coating could be used to create durable, scratch-resistant lenses for eyeglasses, self-cleaning windows, improved solar panels and new medical diagnostic devices, said principal investigator Joanna Aizenberg, who is the Amy Smith Berylson Professor of Materials Science at the Harvard School of Engineering and Applied Sciences (SEAS), a core faculty member at the Wyss Institute for Biologically Inspired Engineering, and professor of chemistry and chemical biology.

SLIPS was inspired by the slick strategy of the carnivorous pitcher plant, which lures insects onto the ultraslippery surface of its leaves, where they slide to their doom. SLIPS’ thin layer of liquid lubricant allows liquids to flow easily over the surface, much as a thin layer of water on an ice rink helps an ice skater glide. (See video.) Unlike earlier water-repelling materials, SLIPS repels oil and sticky liquids like honey, and it resists ice formation and bacterial biofilms as well.

Aizenberg and her colleagues sought to develop a coating that accomplishes this, but extends those capabilities further. The new SLIPS design surpasses existing coatings, which can be quite robust but not slippery or transparent, or, alternatively, transparent but not mechanically stable or repellent enough, Aizenberg said.

“The SLIPS-like coating is mechanically stable and has a long-lasting performance as a slippery surface because it’s composed of a sturdy honeycomb-like structure that holds lubricant in tiny, container-like pits,” said lead author Nicolas Vogel, a postdoctoral fellow in applied physics at SEAS.

To create this coating, the researchers corral a collection of tiny spherical particles of polystyrene, the main ingredient of Styrofoam, on a flat glass surface like a collection of Ping-Pong balls. They pour liquid glass on them until the balls are more than half buried in glass. After the glass solidifies, they burn away the beads, leaving a network of craters that resembles a honeycomb. They then coat that honeycomb with the same liquid lubricant used in SLIPS.

Applying the SLIPS-like coating to glass slides confers unmatched mechanical robustness. Slides treated this way withstood damage and remained slippery after various treatments that can scratch and compromise ordinary glass surfaces and other popular liquid-repellent materials, including touching, peeling off a piece of tape, and wiping with a tissue.

These glass slides with the SLIPS coating also repelled a variety of liquids, just as SLIPS does, including water, octane, wine, olive oil and ketchup. And, like SLIPS, the coating reduced the adhesion of ice to a glass slide by 99 percent. Keeping materials frost-free is important because adhered ice can take down power lines, decrease the energy efficiency of cooling systems, delay airplanes, and lead buildings to collapse.

By adjusting the width of the honeycomb cells to make them much smaller in diameter than the wavelength of visible light, the researchers made the coating completely transparent.

The researchers were also able to apply the SLIPS-like coating to glass slides in a pattern that confines liquid to specific areas—an ability that’s important for various lab-on-a-chip applications and medical diagnostics.

“We set ourselves a challenging goal: to design a versatile coating that’s as good as SLIPS but much easier to apply, transparent, and much tougher—and that is what we managed,” Aizenberg said.

The team is now honing its method to better coat curved pieces of glass as well as clear plastics such as Plexiglas, and to adapt the method for the rigors of manufacturing.

“Joanna’s new SLIPS coating reveals the power of following nature’s lead in developing new technologies,” said Donald E. Ingber, founding director of the Wyss Institute, Professor of Bioengineering at SEAS, and Judah Folkman Professor of Vascular Biology at Harvard Medical School and Boston Children’s Hospital. “We are excited about the range of applications that could use this innovative coating.”