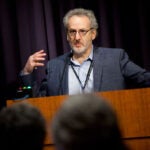 A team of researchers from Harvard University has invented a way to keep metal surface free of ice and frost. The treated surfaces quickly shed even tiny, incipient condensation droplets or frost, simply through gravity. The technology prevents ice sheets from developing on surfaces, and ice that is present slides off effortlessly.

The discovery, published online as a manuscript in the journal ACS Nano on June 10, has direct implications for a wide range of metal surfaces, such as those used in aircraft, refrigeration systems, wind turbines, marine vessels, and construction.

The group, led by Joanna Aizenberg, Amy Smith Berylson Professor of Materials Science at the Harvard School of Engineering and Applied Sciences (SEAS) and a core faculty member at the Wyss Institute for Biologically Inspired Engineering at Harvard, previously introduced the idea that it was possible to create a surface that prevented ice by using coatings inspired by the water-repellent lotus leaf. Yet this technique can fail under high humidity, as surface textures become coated with condensation and frost.

“The lack of any practical way to eliminate the intrinsic defects … that contribute to liquid condensation, pinning, freezing, and strong adhesion has raised the question of whether any solid surface,” irrespective of its topography or treatment, “can ever be truly ice-preventive, especially at high-humidity, frost-forming conditions,” Aizenberg said.

To combat this problem, the researchers created a radically different technology that is suited for both high humidity and extreme pressure, called Slippery Liquid Infused Porous Surfaces, or SLIPS. SLIPS are designed to expose a defect-free, molecularly flat liquid interface, immobilized by a hidden nanostructured solid. On these ultra-smooth, slippery surfaces, fluids and solids alike — including water drops, condensation, frost, and even ice — slide off easily.

The challenge was to apply this technology to metal surfaces, especially since such materials are commonplace in the developed world, from airplane wings to railings. Aizenberg and her team developed a way to coat metal with a rough material to which the lubricant adheres. A coating can be finely sculpted to lock in the lubricant and can be applied over a large area on metal surfaces. In addition, the coating is non-toxic and anti-corrosive.

To demonstrate the robustness of the technology, the researchers successfully applied it to refrigerator cooling fins and tested it under a prolonged, deep-freeze condition. Compared with existing “frost-free” cooling systems, their innovation prevented frost far more efficiently and for a longer time.

The new technology also helps to lower energy costs. This approach to combatting slippery metallic surfaces holds great promise for broad application in the refrigeration and aviation industry and in other high-humidity environments, where ice-phobic surfaces are desirable. For example, once the coating is applied, ice on roofs, wires, outdoor signs, and wind turbines can be easily removed merely by tilting, slight agitation, or even wind and vibrations.

“This new approach to ice-phobic materials is a truly disruptive idea that offers a way to make a transformative impact on energy and safety costs associated with ice, and we are actively working with the refrigeration and aviation industries to bring it to market,” said Aizenberg.

Aizenberg is also professor of chemistry and chemical biology in the Department of Chemistry and Chemical Biology, the Susan S. and Kenneth L. Wallach Professor at the Radcliffe Institute for Advanced Study, and director of the Kavli Institute for Bionano Science and Technology at Harvard.

Her co-authors included Philseok Kim, a Technology Development Fellow at the Wyss Institute and SEAS; Tak-Sing Wong of the Wyss and SEAS; Jack Alvarenga and Michael J. Kreder of the Wyss; and Wilmer E. Adorno-Martinez of the University of Puerto Rico.

The authors received support from the Materials Research Science and Engineering Center at Harvard. Part of this work was performed at the Center for Nanoscale Systems at Harvard, supported by the National Science Foundation. In addition, the team acknowledged the Croucher Foundation Postdoctoral Fellowship and the REU BRIDGE, co-funded by the ASSURE program of the Department of Defense, in partnership with the National Science Foundation’s REU site program.