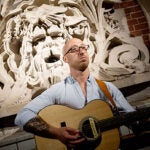 Professor was an expert on bioluminescence

J. Woodland “Woody” Hastings, the Paul C. Mangelsdorf Professor of Natural Sciences Emeritus in Harvard’s Department of Molecular and Cellular Biology, passed away on Wednesday, according to his family. He was 87.

Hastings was an expert on bioluminescence and one of the founders in the field of circadian biology. By studying a single-celled marine bioluminescent dinoflagellate, he detected the inner workings of circadian rhythms that, scientists increasingly realize, affect our lives as well. “Just think of jet lag,” Hastings suggested during an interview in 2010. In his research, Hastings also identified a green fluorescent protein (GFP) in colonial hydroids that is now standard in the biologist’s toolbox. Researchers who applied GFP as a reporter for gene expression won the 2008 Nobel Prize in chemistry. Hastings also discovered that bacteria can communicate with each other using a mechanism he called autoinduction, later dubbed quorum sensing, which has fundamentally changed the understanding of the microbial world.

Hastings’ work has had relevance to naturalists, basic researchers, medical clinicians, industry, the human sleep lab, the child’s glow stick, and more, and earned him many awards and honors, including election to the National Academy of Sciences.

Born in 1927 in Salisbury, Md., at 10 Hastings became a choirboy at the Cathedral of St. John the Divine in New York, where he attended its boarding school. The United States was in World War II when he graduated from Lenox School in Massachusetts in 1944, so he joined the Navy V12 medical officer-training program, which sent him to Swarthmore College.

Instead of going to medical school when the war ended, Hastings finished his bachelor’s degree at Swarthmore, resigned from the Navy, taught biology (in French) at a lycée in southern France, and worked on reconstruction in Germany. Returning, he completed a Ph.D. program in biology at Princeton University with E. Newton Harvey, who worked on bioluminescence; Hastings was hooked.

Hastings joined the Harvard faculty in 1966, and it was here that he proved that luciferase, the light-emitting enzyme, and luciferin, its substrate, are synthesized and destroyed daily, not just activated or inhibited, and so is the entire cellular organelle called a scintillon that houses these proteins. Carl Johnson, who worked on this project as a postdoc from 1982 to 1987, recalled that they had trouble convincing reviewers to publish this work. “It was the first demonstration of any circadian rhythm of protein synthesis. Now, it’s commonplace knowledge that many proteins exhibit these rhythms.”

Johnson was one of “many very bright people who were attracted to Hastings’ manner of directing research — a free exchange of ideas without daily supervision,” said Thérèse Wilson, a senior research associate who joined Hastings’ lab in 1969 and conducted independent research on photochemistry. She also co-authored many papers and later a book with Hastings. “He lets people blossom.”

Hastings’ influence on young people went beyond his lab and classrooms, and his own four children. For 20 years, from 1976 to 1996, he and his late wife of 56 years, Hanna, were much acclaimed “co-masters of the Universe” at North House (now Pforzheimer), the smallest and some said the most intimate House at Harvard.

A private memorial service will be held in October.