How the attack affects our lives 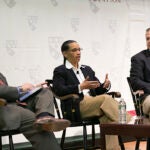 In the wake of Monday’s Boston Marathon bombings, experts across Harvard University analyzed the puzzle and potential of the attack’s aftermath.

An urban planner saw the tragedy as a challenge to openness and freedom in public spaces. An analyst suggested that there may soon be increased video surveillance in cities. A terrorism expert who grew up in Israel saw parallels with that country’s responses. A social worker talked about explaining major violence to children. And a dean reminded us that the human spirit can, and must, triumph.

Here are their thoughts:

The bombing’s horrors were familiar to Blum, who grew up in Israel, where terrorist explosions at popular cafes and on crowded buses were a regular occurrence. When she heard of the Boston attacks, it seemed “all too foreign, as belonging to a different place in some way, not here. I always think this is not Jerusalem, Boston is not Jerusalem, so it was eerie in that sense.”

Blum, who served in the Israeli military, was a member of the Israeli National Security Council, and now co-directs the Harvard Law School-Brookings Project on Law and Security, said she was surprised that President Obama at first hesitated to label the attack as terrorism. “I think hedging the fact that it was probably terrorism, that was going too far.”

Still, Blum acknowledged the administration’s initial reluctance was likely due in large part to “this current social association of terrorism with extreme, Muslim terrorism.”

“I think officials were very careful not to go there before they had more information,” she said. “So they wanted to make sure that they keep an open mind, the public keeps an open mind about possible perpetrators, about possible motivations, without prejudging the event.” She said she agreed with the president’s later statement that any intentional, indiscriminate attack on civilians is terrorism.

Blum said there is frequently tension between officials who want to classify terrorism as a criminal act and those who say it is a crime of war. In Boston, she said, officials have clearly decided to label the bombings a crime, “meaning that any search they perform is a lawful search … and there is a chain of evidence that is well recorded, that interviews are conducted lawfully, that everything … has to be done by the rules, and the rules are those of law enforcement. They are not rules of war.”

As is the practice in Israel, she said Boston officials are wise to encourage people to embrace some normalcy. “You can’t possibly diminish from the gravity of what has happened,” she said. “The message does need to be that people should try to resume their normal lives as much as possible, as quickly as possible, if you haven’t been personally affected by these events.

“My humble impression, looking from the sidelines, is I think they have handled it very well so far. The message is one of resilience,” she said. “Something terrible has happened, but Boston is a strong city, it has a long and rich, important history in the history of the United States. … There is going to be a cordoned-off area … and there’s going to be an increased police presence. But other than that, we expect you to resume your normal life as much as possible.”

Kayden said the marathon bombings may reduce access to some public spaces, at least in the short term, and deepen public attitudes about the need for security in shared civic spaces, a trend that started after the 9/11 attacks. He added that the bombings will renew a challenge to architects and urban planners: How do you design public space to be secure, but in a way that preserves its accessibility?

An internationally recognized expert on public space, Kayden is an advocate for what he calls “public-ness,” the expectation of accessibility in shared urban territory, whether in parks, plazas, atria, and other locales of transitory city life. He wrote the 2000 book “Privately Owned Public Space: The New York City Experience.” An urban planner and land-use lawyer, he teaches a GSD course on public space and recently organized a two-day international conference on the puzzle, power, and potential of public space.

He said the first possible reaction to the attack is to revisit the lessons of 9/11. “Owners and managers of public space instituted new rules that, in the quest for greater security, necessarily reduced the public-ness of a space,” said Kayden. “That may mean reducing or eliminating access to a space, ID and bag checks, surveillance cameras, and greater presence of security guards.”

Tightening or eliminating access can happen in privately owned public spaces, he said, which by law are required to be open to the public. “Everybody recognizes the hierarchy of concern, and that security is of course at the top of that hierarchy,” he said. “But it comes at a cost. The tension between security and openness will never leave us.

“The security experts will review what happened and come up with new strategies for mitigating the risk of this sort of event occurring again,” said Kayden. But part of that discussion, he said, should include a voice for preserving the “public-ness” of such space. “That’s the real challenge.”

MAKING THE HUMAN SPIRIT SHINE THROUGH

When Hempton delivered the School’s convocation as a new dean last fall, he drew on memories of his years in Northern Ireland, where a brutal religious and ethnic conflict raged for decades before waning, to offer his audience a vision of hope.

Speaking to his staff after Monday’s attack, he recalled how it felt for a city like Belfast to be brutalized by violence, and to weather “an attack on the human spirit.” At an event like the Boston Marathon, where people support and celebrate one another’s resilience and endurance, the bombings were “a dagger to the heart of all that human solidarity.”

But Hempton urged caution and restraint as the facts are gathered, recalling how Northern Ireland had instituted a policy of internment without trials for terrorist suspects.

“You can manipulate your own laws in ways that can make a situation worse rather than better,” said Hempton, “so I think we need to respond appropriately, in a free society, without in any way diminishing … the moral outrage at an act like this. But as a free society, we need to think of our response in a measured and mature way, because idle talk or revengeful thoughts aren’t going to undo this act.”

Amid the horror, Hempton said he was reminded of the goodness of the human spirit, “that wonderful sense of human togetherness as the first responders and the medical people with courage and compassion just took charge and helped people. These are awful incidents, but in the midst of this awfulness, that human compassion and spirit shines through in tremendously impressive ways.”

Hempton said he also felt that “resilience of good people” very strongly in Northern Ireland, and its people’s “determination to build a humane and just society in the light of provocation and deep cruelty.”

“The things we believe in today, we believed in two days ago. And we are going to go on believing, and no amount of nasty viciousness is going to deflect us from that. The people who did this need to be brought to justice, but our society will move on.”

Feldman, an authority on civil liberties, says, “An individual event, if it turns out to be relatively isolated, and perpetrated by an individual or a small group of people not connected to a national network, is not likely to have a major impact on civil liberties. If there were repeated events that took place on a broader scale and they didn’t seem to be isolated, that would be a different kettle of fish.”

Feldman said the Boston attack will continue “a trend toward scrutiny of public actions, such as video surveillance of public places. That’s already a major national and international trend.” A traveler in London “can barely go anywhere without being on closed-circuit television,” he said, and “New York is moving in that direction.” Boston had not embraced the idea of widespread public surveillance, “but perhaps we’ll see an uptick in that,” said Feldman, “especially if surveillance turns out to be useful in finding the perpetrators, which seems to me very possible.”

With increased video surveillance would come increased coordination, linking cameras on the street, say, to those “inside of stores or other places where it’s conceivable these bombs may have been placed. In some way, that does affect our sense of anonymity, but it doesn’t affect civil liberties in the classical sense, since it’s about your public actions. It’s already the case that people can see what you’re doing when you walk down the street. This just means there might be a video record of it.”

The Boston attack also supplied a nudge that feels familiar. “At the level of public consciousness, this is a reminder that there is no — and there probably can never be any — guarantee of total security,” said Feldman. “It’s a reminder there will always have to be some degree of vigilance.”

HOW TO HELP CHILDREN COPE WITH VIOLENCE

When it comes to discussing the marathon bombings with children, it is critical to be open and honest, while keeping in mind a child’s age, said Groves.

The licensed clinical social worker is also the founding director of the Boston Medical Center’s Child Witness to Violence Project, which helps children cope with domestic or community violence and other traumatic events. Parents should tell their children the truth, she said, yet proceed cautiously.

“This notion that kids are too young is one we have to be really careful about,” said Groves, who worked with preschoolers in the aftermath of the 9/11 terrorist attacks. “Parents assumed then that 3- or 4-year-olds didn’t know anything about it,” she said. But at day care centers, kids were playing “buildings falling down.”

While parents shouldn’t necessarily go into detail with 3-year-olds, they should take cues from their children, said Groves, and be willing to have sensitive conversations with them as the need arises. By simply sticking to the facts, parents can help ease children’s fears or correct misunderstandings, she said, as well as reassure them about their safety.

“Children take cues from their parents about how to make sense of all kinds of events in the world,” said Groves. She urged parents to assess their own feelings, and then determine what they will say and how they will say it before having a conversation with their kids. “I think that parents need to just give themselves permission to collect their own thoughts.”

Honesty is critical, she added, noting that opening a dialogue with children signals that it’s OK to discuss a difficult subject. “If parents take the initiative to bring it up, it makes the topic less scary to start with.’”

Limiting teenagers’ exposure to graphic content on the Internet and television is difficult, but parents should try to shield younger children from a barrage of disturbing media images, said Groves.

Most Massachusetts schools are in the midst of a weeklong spring vacation, so many teachers won’t have the chance to discuss the attack with their students until Monday. In the interim, Groves urged school administrators to develop action plans before returning from the break, “some plan for dealing with children’s questions and/or talking with them proactively.” In the absence of a plan, the message from teachers needs to be that talking about the attack in the classroom is fine, since, “It’s the indication that we are open.”

One way to help students to cope with the news, said Groves, is to find a way for the students to give back, perhaps by contributing to a fund for a victim, or sending a letter of thanks to a local police department. “For all of us, this feeling of helplessness is the worst thing,” she said. Giving kids a way to contribute “counteracts helplessness.”