A case for yawn-free civics 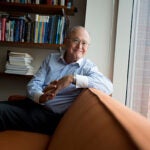 It’s a common refrain that immigrants taking the U.S. citizenship test know more about the workings of the federal government than the average holder of a U.S. birth certificate.

A group of experts dedicated to grappling with the themes outlined in the Constitution gathered Monday at Harvard Law School (HLS) to explore that disturbing trend and the importance of civics.

Two retired U.S. Supreme Court justices, a constitutional scholar, a former U.S. solicitor general, and the dean of HLS took part in the noontime session, part of a daylong symposium titled “Civics Education: Why It Matters to Democracy, Society, and You.” The HLS Dean’s Office, the Campaign for the Civic Mission of Schools, and the Harvard Graduate School of Education sponsored the event.

Dean Martha Minow opened the conversation by asking the participants about their personal connections to the topic, and its relevance today.

Sandra Day O’Connor, the first woman to serve on the Supreme Court, responded frankly, telling the crowd that her grade-school introduction to civics was “boring. I really got tired of it.”

Since stepping down from the bench in 2006, O’Connor has devoted much of her time to advocating for early civics education. In 2009 she founded the nonprofit iCivics, an online learning platform that includes free teaching materials devoted to the topic.

Justice David Souter, who delivered Harvard’s commencement address in 2010, described a constitutional system balanced “between two very fundamental tendencies in American society and American political organization: the tendency to fly apart into individual interest and historical and individual groups, and the tendency to pull together.”

Binding the nation together, said Souter, is at the heart of the value system outlined in the Constitution, “a value system about how to use power and distribute it and limit it, and a value system that reflects a shared conception of human worth. That value system is the counterpoise to the divisive tendencies that are so strong. Civic ignorance is the defeat of that value system.”

He added: “What in effect is driving me right now is simply the essential nature of a substantially ignored value system. Without it there is no chance of overcoming, of surviving, the polarization that everyone decries. Because it is only in the common acceptance of that value system that we are going to know that at the end of the day no matter what we are fighting about, no matter what the vote is in Congress, or the state house, or the town meeting, there is something that holds us together.”

Kenneth Starr, former solicitor general, said his concern for civic engagement really took hold when he argued for the constitutionality of the Flag Protection Act of 1989. Though he lost the case in 1990, Starr said that press reports and public opinion polls during the hearing underscored what he called an “inadequate appreciation on the part of the American people … of what I would just call the culture of liberty.”

Later, volunteering in city schools, Starr, now the president of Baylor University, was disturbed by the “erosion of the values of liberty as taught in schools” and a lack of appreciation “of the fact that kids have rights, and the baseline, even for them, is liberty as well.”

More than 30 years ago, a local pub and a thirsty student helped Laurence Tribe, Harvard’s Carl M. Loeb University Professor, truly appreciate the importance of civics. While he was making the point that “governmental power cannot be delegated to religious bodies” during an HLS class, Tribe said, a student challenged the claim, complaining that he couldn’t get a lunchtime beer at a local restaurant because a nearby church, under the protection of Massachusetts law, had denied its access to a liquor license.

The student, along with Tribe and his then-colleague Stephen Breyer, now a Supreme Court justice, filed a lawsuit claiming that the church’s interference was a violation of the First Amendment’s establishment clause. The trio took the case all the way to the Supreme Court, where they won with an eight-to-one decision.

“The unintended lesson that civic engagement matters, that you can actually make a difference in fundamental principles that govern the country just by asking a question, that stuck with me and it has been one of my best experiences,” said Tribe.

One way to combat a growing cynicism about government, especially in younger generations, is to engage young people in some kind of civic action or experience, agreed the panelists.

“All you have to do is get the students involved in some question of a local nature that raises a constitutional issue. Let them ask the question and get involved, maybe bring some petition or motion before a public body to get them engaged in it. It gets them turned on right away,” said O’Connor.