Tom Everett to retire from Harvard 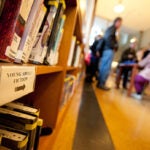 By Tom Lee Office for the Arts Communications

The Office for the Arts at Harvard and Harvard’s Department of Music announced that Thomas G. Everett, director of Harvard Bands since 1971, will retire Feb. 15.

Everett has also served at Harvard as associate of the Department of Music, lecturer on Afro-American studies and on music, and jazz adviser to the Office for the Arts. In addition to his duties as director of Harvard Bands — which include the University Band, Harvard Wind Ensemble, and Harvard Jazz Bands — Everett has taught, conducted, and performed the work of many modern and contemporary music masters, and, for more than four decades, guided and mentored generations of Harvard musicians and student leaders.

“Tom Everett’s extraordinary musicianship, his dedication to teaching and scholarship, and depth of knowledge — especially regarding 20th-century American composers and artists of the jazz tradition — connected our students and faculty to many of the field’s greatest musical innovators,” said Jack Megan, director of the Office for the Arts. “His is an extraordinary and lasting legacy, and Harvard musicians are infinitely richer for his contributions.”

“In the jazz realm Tom Everett has educated our students about the music’s evolution, and led the College’s jazz ensembles through four decades, which has inspired a sea change that has brought scholars in jazz history to our faculty, as well as jazz harmony and improvisation courses to our regular curriculum,” said Alexander Rehding, Fanny Peabody Professor of Music and chair of the Department of Music. “We are grateful that his rare vision helped forge and nurture a vibrant music scene at Harvard.”

Everett was appointed director of bands at Harvard in 1971. Overseeing the student-managed University Band, his earliest responsibilities were to work with the band on its famed halftime show presentations at Harvard football games. The University Band is one of Harvard’s busiest and most visible organizations, supporting Harvard athletics as well as performing spirited Harvard songs for commencements, diplomatic greetings, and parades. Everett has also conducted ceremonial music over the years for the Development Office, President’s Office, Alumni Association, and University Marshal’s office.

His prodigious creativity and scholarship led Everett to bring the field of jazz to Harvard single-handedly, establishing jazz programs and teaching the first jazz course for academic credit through the Harvard Extension School in 1973 and the first for Harvard’s Faculty of Arts and Sciences beginning in 1978. His course “The Jazz Tradition” was cross-listed in the Departments of Music and African and African American Studies, and during its three years included guest lecturers Teddy Wilson, David Liebman, Toshiko Akiyoshi, Joe Williams, Zoot Sims, Doc Cheatham, Lee Konitz, Dave Brubeck, and Sabby Lewis.

Everett holds degrees from Ithaca College and studied trombone privately with Emory Remington and Roger Smith. Receipt of the Hungarian “Artisjus” award in 1988 resulted in his conducting a program of American Music live over Hungarian National Radio. In 2008, he was the recipient of the Luise Vosgerchian Teaching Award from Harvard, which honors individuals nationally or internationally who reflect the values and dedication to music and arts education of the late Luise Vosgerchian, Walter W. Naumberg Professor of Music Emerita in the Department of Music.

Everett’s future plans include travel with his wife, Betsy, and writing articles illuminating the unique voices and contributions of underappreciated jazz trombonists Frank Rehak, Willie Dennis, and Jimmy Knepper, as well as documenting his longtime fascination with the music of Henry Brant, Harry Partch, Henry Cowell, Alec Wilder, and Conlon Nancarrow, a quintet of mid-20th-century American maverick composers. His Harvard career will be celebrated in various ways at the University, including a Jazz Bands concert dedicated to him on April 13 at 8 p.m. in Sanders Theatre. Appropriately, this event will feature two of his protégés as guest artists: Joshua Redman ’91 and Don Braden ’85.

Mark Olson, assistant director of bands, will serve as acting director while a director search is undertaken. Saxophonist/composer Don Braden will continue to serve as guest conductor for the Monday Jazz Band.