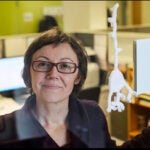 Two mutations that collectively occur in 71 percent of malignant melanoma tumors have been discovered in what scientists call the “dark matter” of the cancer genome, where cancer-related mutations haven’t been previously found.

Reporting their findings in the Jan. 24 issue of Science Express, Harvard Medical School (HMS) researchers at the Dana-Farber Cancer Institute and researchers at the Broad Institute said the highly “recurrent” mutations — occurring in the tumors of many people — may be the most common mutations in melanoma cells found to date.

The researchers said these cancer-associated mutations are the first to be discovered in the vast regions of DNA in cancer cells that do not contain genetic instructions for making proteins. The mutations are located in non-protein-coding DNA that regulates the activity of genes.

This non-coding DNA, much of which was previously dismissed as “junk,” accounts for 99 percent of a cell’s genome. A large number of oncogenic mutations in cancer have been identified in the past several decades, but all have been found within the actual genetic blueprints for proteins.

“This new finding represents an initial foray into the ‘dark matter’ of the cancer genome,” said Levi Garraway, HMS associate professor of medicine and the article’s senior author.

“In addition, this represents the discovery of two of the most prevalent melanoma gene mutations. Considered as a whole, these two TERT promoter mutations are even more common than BRAF mutations in melanoma. Altogether, this discovery could cause us to think more creatively about the possible benefits of targeting TERT in cancer treatment or prevention,” Garraway said.

The mutations affect a promoter region — a stretch of DNA code that regulates the expression of a gene — adjacent to the TERT gene. TERT contains the recipe for making telomerase reverse transcriptase, an enzyme that can make cells virtually immortal, and is often found overexpressed in cancer cells. A promoter region of DNA controls the rate of a gene’s transcription — the copying of its DNA recipe into a message used by the cell to manufacture a protein.

“We think these mutations in the promoter region are potentially one way the TERT gene can be activated,” said Franklin Huang, an HMS clinical fellow in medicine and co-first author of the report along with Harvard M.D.-Ph.D. student Eran Hodis.

To investigate the mutation’s effect, the researchers hooked the mutant TERT promoter to a gene that makes luciferase, a light-emitting protein. They observed that the mutant promoter increased the production of luciferase in laboratory cell lines. In the same way, the scientists presume, the mutant promoter in human pigmented skin cells can send the TERT gene into overdrive, potentially contributing to the development of melanoma.

The mutations were discovered when the scientists sifted through data from whole-genome sequencing of malignant melanoma tumors. Unlike “whole-exome” searches that examine only the protein-coding DNA of a cell’s genome, whole-genome searches scan all the DNA, including the non-coding regions.

In analyzing whole-genome data, the investigators discovered the two somatic, or not-inherited, mutations in 17 of 19 (89 percent) of the tumors. Next, they sequenced a larger number of melanoma tumors and found that the two mutations were present in 71 percent of tumors in total.

The researchers said the same mutations are present in cell lines from some other malignancies, and that preliminary evidence showed they might be unusually common in bladder and liver cancers. They also noted that the discovery of these important mutations in DNA previously not linked to cancer-causing alterations highlights the value of whole-genome searches of tumor DNA.

Other authors include Mary Jue Xu, a student at Harvard Medical School; Gregory V. Kryukov of the Broad; and Lynda Chin of MD Anderson Cancer Center.

The research was supported in part by the National Institutes of Health, the Mittelman Family Fellowship, the American Cancer Society, the Novartis Institutes for Biomedical Research, the Melanoma Research Alliance, and the Starr Cancer Consortium.

This article was adapted from a Dana-Farber Cancer Institute news release.