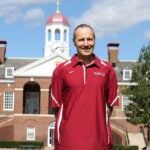 Harvard President Drew Faust says she would like to build as her legacy a more accessible and welcoming Harvard, with fewer boundaries — internal or external — that block the full development of an individual’s talent.

“I would like people to feel like Harvard was open to them, that the boundaries that might separate them from what Harvard has to offer were significantly broken down during my presidency,” Faust told an audience at Sanders Theatre on Tuesday (Sept 21).

In the session, Faust, who joked that she might outlast the tenure of President Charles William Eliot, who served for four decades, responded to questions posed by former ABC News anchor Charlie Gibson, a fellow this fall at the Harvard Kennedy School’s Shorenstein Center for the Press, Politics and Public Policy. Gibson also asked questions from the audience.

Though Faust touted Harvard’s growing interdisciplinary strengths, Gibson responded that he sees Harvard as a “Balkanized” institution and that faculty members “chuckle” when asked about reducing barriers among Harvard’s famously decentralized Schools. Faust stuck to her guns, however, saying that the world’s problems increasingly demand interdisciplinary solutions and that students want their education to equip them to address those problems, regardless of institutional boundaries.

Responding to Gibson’s questions, Faust addressed a wide range of issues facing the University in the 2010-11 school year. Gibson pressed Faust on several topics, including University finances (they’re improving); on Allston (it’s key to the future, and planning is ongoing); and on the alleged scientific misconduct of psychology professor Marc Hauser.

Faust acknowledged the seriousness of the findings against Hauser, saying that “integrity is absolutely fundamental to what we do.” She noted that Harvard officials had taken firm steps to correct the scientific record and that they had sent a letter to members of the faculty outlining the findings even though such information customarily remains confidential. “In this instance, we’ve said more than we ever have,” she said.

Gibson also asked about the reaction to disparaging comments about Islam made by former faculty member Marty Peretz. Gibson questioned why the University was still inclined to accept a gift in Peretz’s name.  The president agreed that the comments had been “very hurtful to many in our community” and that they were “at odds with the kind of fundamental values that we wish to embrace.” But she noted that the gift was from a group of alumni who wanted to recognize the contribution that Peretz made to their education and careers. In addition, she said, the gift was also an affirmation of the importance of involving undergraduates in research.

Discussing University finances, Gibson expressed surprise at the level of financial aid, which goes to 60 percent of the undergraduate freshman class, with an average grant of $40,000. He called that aid “staggering” and questioned whether it was sustainable. Faust indicated the financial aid commitment is unwavering because it is a key part of Harvard’s mission to educate talented individuals, regardless of their ability to pay.

Faust indicated that the University’s financial picture is improving — endowment investment returns were up 11 percent in the past fiscal year — even though the endowment remains below its high of just two years ago. She said fiscally prudent steps taken recently were not just done to save money, but as part of a reassessment of how the University operates. Reflecting on the fiscal challenge that she was handed almost as soon as she took office, Faust said it’s all just part of the job.

“I’ve been around universities long enough, all my adult life, to know that universities are always filled with surprises, and that’s one of the wonderful things about them,” Faust said. “When I took this job, it was a little like getting married. You do it for better or worse, for richer or poorer, so I’ve always [asked]: What are the opportunities inherent in where I find myself? What is the hand I’ve been dealt? How do you make the most of that?”

Gibson also asked whether too many students are making career choices upon graduation based on practicality rather than on living their dreams. Faust recalled being asked by a student why so many young graduates choose careers on Wall Street. She said in reply that she urges students to follow their passions, since, even if they don’t pan out, a practical job awaits. Faust advised students in the audience to focus on what they’re doing now, and not to be distracted by what they perceive their next step in life or their career should be.

“My advice is to be fully where you are. Don’t constantly be thinking about wanting to be in the next place,” Faust said.