The greening of the Law School 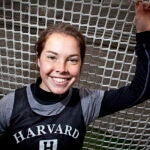 The tale of the two-sport athlete

Editor’s note: This is the third in an occasional series of stories on the measures individual Schools at Harvard are using to reduce greenhouse gas emissions.

Every unit, division, and School at Harvard is in a race to meet a pledge: Reduce greenhouse gas emissions 30 percent by 2016, with 2006 as the baseline year.

Harvard Law School (HLS) is gaining ground on its goal. Buildings on its campus now use about 22 percent less energy than four years ago. The result is a 15 percent drop in greenhouse gas emissions between fiscal year 2006 and fiscal year 2009.

HLS officials say the first and biggest step to save energy is encouraging people to act differently.

“The first phase was more about people than about building projects,” said John Arciprete, HLS director of facilities management. “The goal was to get people talking about changing their habits, and encourage them to take action.”

The School’s Green Living Program, a partnership with Harvard’s Office for Sustainability (OFS), now in its fifth year, employs five students who educate their peers about energy and water conservation, recycling, and waste reduction. A blog promotes awareness events such as Earth Hour, the annual worldwide campaign that encourages people to turn off their lights for 60 minutes.

Last fall, the program ran an electricity competition. Over four weeks, the initiative helped each HLS dorm to reduce its energy consumption by 1 to 5 percent, simply by encouraging residents to shut off lights and electronic equipment.

Regular audits done by the program show a sharp decrease since 2005 in the percentage of waste that could have been recycled.

Like many other Schools around the University, HLS has a green team, a group of students and staff who meet monthly to improve campus sustainability. The team distributed maps with the locations of tap and filtered water stations on campus. It also coordinates “freecycles,” where offices and individuals can swap materials they no longer need for ones that they do. And it recently developed a composting outreach project at Harkness Commons.

“There are so many gains to be made from working with individuals to change how we use resources,” said Cara Ferrentino, HLS sustainability coordinator. “We are really trying to encourage everyone to take ownership of sustainability and think about their surroundings and what they can do to make a difference.”

In May 2009, the School adopted a temperature policy to promote energy conservation. During winter, occupied spaces are heated to no more than 70 degrees. During summer, cooling is capped at 74 degrees. Many of the thermostats at HLS are still user-controlled, so outreach plays an important role.

All of the School’s 24 buildings have been fitted with water-saving dual-flush toilets. In the Gropius dormitories (Ames, Dane, Holmes, and Shaw), new front-load washing machines save 650,000 gallons of water a year, worth about $11,500.

At HLS, building projects are saving energy too. Last year, a suite of offices at Griswold Hall was renovated to achieve a Platinum rank, the highest given by Leadership in Energy and Environmental Design (LEED), a green building rating system.

Lights at Griswold now automatically dim with the presence of sunlight. Occupancy sensors adjust room temperatures when the offices are not in use. And efficient sink fixtures will save an estimated 39,000 gallons of water annually.

HLS also recently received LEED Silver certification for renovating commercial interiors at 125 Mt. Auburn St. The School is also working with a sustainability consultant for its new Northwest Corner building complex, and officials expect the project will receive a LEED Gold rating. Additionally, almost 95 percent of the construction’s scrap materials will be recycled.

Other Law School buildings have “variable frequency drives” that cool and heat rooms at different rates, depending on occupancy and temperature. At Langdell, Lewis, and Pound halls, the units are expected to save $32,000 a year.

The School’s attempts to save energy even have reached beyond campus.

Representatives of hundreds of law offices visit the campus each fall, aiming to recruit a talented crop of new graduates. But the visits can harm the environment in two significant ways: greenhouse gases from all the travel, and large amounts of paper waste from recruiters’ printed materials.

Participating firms agree to limit their printed materials to one double-sided sheet; to replace bottled water with pitchers of tap water; and to use reusable cups at hospitality functions and receptions. Above all, the firms must consent to purchase carbon offsets — credits in companies that invest in carbon-reducing projects.

Next: A look at the Harvard School of Public Health.