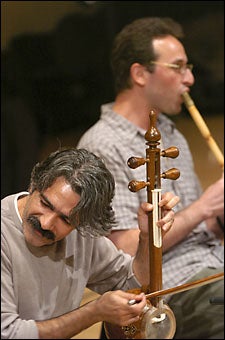 They say music is the universal language. The Silk Road Project offers proof. Silk Road Ensemble performance video: – Real /QuicktimeFounded in 1998 by cellist Yo-Yo Ma ’76, the Silk Road Project takes its name and inspiration from the ancient trade routes that once linked the people and traditions of Asia with those of Europe. Ma has resurrected those linkages by bringing together musicians, composers, dancers, storytellers, and others from the cultures that once traded goods and ideas along those routes. The aim of the project, in Ma’s words, is “to plant the seeds of new artistic and cultural growth, and to celebrate living traditions and musical voices throughout the world.”On Tuesday (Sept. 27), members of the Silk Road Ensemble, representing the musical traditions of Persia and the West, performed and fielded questions at an event sponsored by the Office for the Arts’ Learning from Performers program. The event was part of the ensemble’s weeklong residency at Harvard.After a short introduction by moderator Kay Shelemay, the G. Gordon Watts Professor of Music and professor of African and African American studies, violinists Jonathan Gandelsman and Colin Jacobsen joined Ma for a rendition of two traditional Rroma melodies. Percussionist Shane Shanahan provided a muted accompaniment on a cajon, a boxlike instrument used in Latin American music.Jonathan Gandelsman (left) and Nicholas Cord perform.Afterward, Shelemay started off the Q&A period by asking, “What’s it like being a member of the Silk Road Project?””What it’s taught me about the cross-cultural musical experience,” said violist Nicholas Cords, “is that you can’t approach it from the outside. You’ve got to start with at least one foot in the circle.”Kayhan Kalhor, an Iranian composer and a virtuoso on the kamancheh, an instrument related to the violin, said, “Being a musician in every culture is basically the same. Playing with the Silk Road Ensemble has taught me how to approach different kinds of music. It’s like learning different languages.”Some of the musicians described the rewards of studying the music of another culture.Siamak Aghaei, an Iranian musician who plays the santur, a type of hammered dulcimer, said that learning about Western music has helped him to gain greater mastery of his own musical tradition.Ma called the experience of working with non-Western musicians, “the most wonderful learning curve.”Gandelsman put it even more succinctly: “The ear opens and the heart opens.”Aghaei, Kalhor, and a third Iranian musician, Siamak Jahangiri, a master of the ney, an end-blown bamboo flute, played an example of traditional Persian improvised music.”We don’t know where we’re going to go,” said Kalhor. “We will limit ourselves to 10 minutes, but all we know is the scale the santur is tuned in.”The piece that resulted was haunting and melancholy, marked by insistent, repetitive phrases, with each of the instrumentalists taking solos in the manner of jazz musicians. Afterward, Gandelsman remarked on the difference between the Persian and Western approaches to performing.”My experience with Persian music is of being gently pulled in. It seems that what you do when you perform is you try to pull the audience into the music. The Western approach, I think, is to bring the music out.”There was some discussion of what to call the kind of music the Silk Road Project has been producing. “I’m not sure if there are any definitions for this kind of music yet. Would you call it world music? We are struggling with that – how it should be categorized – if it should be categorized.””I don’t know if there is a need to categorize,” said Ma. “What we’re trying to do is learn enough about these traditions to allow them to live in different places. It’s nice not to have a term for it.”