Age can't get boxing coach Tommy Rawson up against the ropes

By Story and photos by Jon Chase

At 92, Tommy Rawson still drives to the gym from his home in Arlington five days a week, hits the heavy and speed bags a bit, and then proceeds to coach the Harvard Boxing Club, as he has done for the past 60 years. If necessary, he also still shovels the snow from his driveway. A small man with dancing blue eyes and a ready smile that belie his inner drive, the soft-spoken coach imparts his ring wisdom quietly but firmly as he circles purposefully among his practicing students. The man is legendary in the boxing annals of New England, and it seems fitting, though a bit improbable, that someone of his stature and longevity is still at the helm as the boxing club moves into the 21st century. 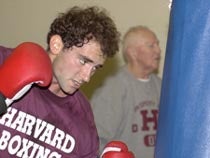 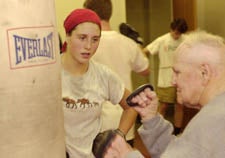 Rawson grew up in East Boston, the son of a master electrician and boxer who fought 20-round fights and counted Jack Johnson, the first black world heavyweight champion, as a personal friend. Tommy started boxing at 12 with his brothers and friends, and got serious about the sport when he turned 16, after breaking his nose twice playing football – his mother thought the sport too dangerous.

Rawson fought as an amateur while a student at English High, and also began assisting his father, who coached at M.I.T., and the Charlestown Boys club. After graduating, Rawson worked during the day, went to night school at East Boston High in the evening, and then went to the gym for several hours of serious labor in the ring. Those were the rough ‘n’ tumble days of three to four practice fights a night, four nights a week, at old St. Joseph’s in Bowdoin Square, affectionately known as the “Bucket o’ Blood.” That harsh apprenticeship served Rawson well, as he went on to win the junior national championship in 1929 and the AAU New England lightweight championship in 1935. His amateur record was an incredible 222-5; as a pro he was 89-6, and beat every man who beat him except the world lightweight champion.

When Rawson came to Harvard in 1941, boxing was a year-round, men-only varsity sport; today it’s a winter club sport that includes women. About two dozen students work out five days a week at the Malkin Athletic Center (M.A.C.) under Rawson’s tutelage. What does the coach think of females joining the ranks? “Oh, the girls are fantastic!” he says. “They have better footwork and coordination than the men.” Rarely does a woman spar with a man, but it has happened. Students are matched up with partners of similar weight and ability, so mismatches are rare. Has the inclusion of women changed the atmosphere? Not really, says the coach. “Nobody uses cuss words when I’m around, because that’s the way I was brought up, to talk as if your mother or sister were present. They’re all gentlemen at the gym; I wouldn’t have it any other way, and that’s the way it’s always been.” What motivates today’s student-boxers? “Kids today want to learn how to defend themselves,” he says. “But you have to respect your opponent. I won’t stand for any funny business.”

Rawson lives by himself in Arlington across from the 15th hole at the Winchester Country Club, where he scored two holes-in-one (and hit the pin on a third hole) in the same round when he was 80 years old. He still plays three or four times a week in the summertime. When asked how many holes, he responds, “Oh, 18 holes, of course. But I do ride a cart now since I had my heart attack,” he adds, almost apologetically.

What motivates this man to continue coaching after more than 60 years at Harvard? “I want to be able to take a human being and make them into a machine, using their feet, head, and body, to make an athlete, whether it’s a girl or a fellow. This college, the people, they’re so good, it’s a pleasure working here. And I get letters, telling me how much I helped students to take care of themselves. It means a lot to me.”

And it’s safe to say Tommy Rawson has meant, and will continue to mean, a lot to the Harvard Boxing Club as well. Surrounded by trophies and memorabilia that literally cover every surface in his home, it would be easy for this man to simply bask in former glories. And he does so on occasion, but that old-fashioned work ethic of going to a day job, then to night school, then to the gym, dies hard, and tomorrow is another day at the gym for a man 92 years young.