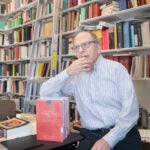 For the last three years Dasha Bough ’23 has taken on her biggest challenge as a young artist: to create an animated documentary challenging one of the world’s oldest and most dangerous and persistent conspiracy theories — that Jews have a secret plot for global domination.

“The Conspiracy,” which premiered in New York in November, traces the origins of that myth and three prominent families caught in its dangerous web during the past 200 years, including the influential Warburg banking family of Germany and the U.S., the Bronsteins of Ukraine, whose son Leon later changed his name to Trotsky, and the Dreyfuses of France, whose name became synonymous with the infamous treason case against son Alfred, an affair that widely divided France and exposed a deep vein of anti-Semitism.

While work on the documentary is done, the conspiracy theories targeting Jewish people have continued. Discussions about the centuries-old myth have once again been pushed to the fore in the wake of recent comments and controversies involving rapper Kanye West, conservative TV personality Tucker Carlson, and comedian Dave Chapelle.

Bough expressed cautious optimism about the project’s ability to make a difference.

“Conspiracy theories, especially today, are so seductive in the way that they’re told in modern media, comedy, and Twitter. They’re so easy to take in. It’s harder to do the work of sitting down and watching an entire documentary that traces the roots of the conspiracy. My hope is that the work we’ve done is different. Aesthetically, thematically, and narratively different enough from anything that’s out there to be as seductive as the conspiracy theories,” Bough said.

Originally, the film was slated to be a “talking heads”-style documentary, but the pandemic prompted director Maxim Pozdorovkin ’12 to pivot and make it fully animated. Bough, who has animated since she was in high school, took a leave from Harvard and was put in charge of a team that included a compositor, 3D artists, and a group of illustrators.

“The process was crazy. It’s totally insane to do a fully animated feature-length film with such a small team,” the 23-year-old said. “We had 100 different characters that we needed to show on screen, and they were all based off of real historical figures.”

Bough’s connection to the film began three years ago, when Justin Weir, Curt Hugo Reisinger Professor of Slavic Languages and Literatures and professor of comparative literature, put her in touch with Pozdorovkin, who ultimately asked the artist to work on some animation for the film.

Each character, setting, and architectural space was digitally created from scratch. The characters’ motions (but not their actual visual appearances) were recorded in a studio in Switzerland with professional motion-capture actors, whom Bough directed over Zoom. The recorded data of the movement was then mapped onto 3D models. She explained that each scene is fully 3D underneath, including the characters and environment, with elements she and her team drew by hand over the 3D frames. The novel process in the animation industry was created by Bough and producer Joe Bender.

Jewish actors, including Liev Schreiber, Lake Bell, Ben Shenkman, and Jason Alexander voiced the characters — such as Trotsky, Dreyfus, and Max Warburg. The film was narrated by actor Mayim Bialik.

“When I started, I knew relatively little about these insidious, age-old conspiracy theories. I didn’t know what the Elders of Zion was; I didn’t know about the protocols,” Bough said, referring to a widely distributed work of fiction repeatedly discredited since its emergence in the early 20th century, purporting to describe a Jewish plan for world domination.

The documentary gave Bough the opportunity to dig deep, a research process she found both engaging and distressing.

“It was a heavy film to work on and be immersed in for two years, but it felt good. It felt like every day I worked on it, I was more convinced by the need for the work,” she said. “I felt pressure to make a film that communicated the horror and the absurdity of everything we were learning from the research. You come out of it feeling totally convinced by how harmful and crazy and intertwined these conspiracy theories are but communicating that in an hour and a half is daunting.”

With “The Conspiracy” out — and being shopped around ­— the 23-year-old is finishing her concurrent undergraduate and graduate degrees within the Russia, Eastern European, Central Asian program and plans to graduate next December. The Currier House affiliate has also shifted her work to another difficult topic: the ongoing war in Ukraine. Bough lived in Russia as a child and later studied art at the Russian Art Academy in St. Petersburg. She has centered her past animated and documentary film work on rural Russia, Ukraine, and Georgia.

Using hand-drawn animation, Bough is stitching together a series of vignettes based on interviews with Russians and Ukrainians who have been affected by the war. She opted to use the technique — instead of photography or video — to grant her subjects anonymity, while also highlighting moments of lightness during the war. She hopes to “breathe new life” into their stories and make sure the world does not become desensitized to the conflict.

“I could just wait and make this after the end of the war,” she said. “But it feels like there’s something important about allowing people to tell their stories now.” 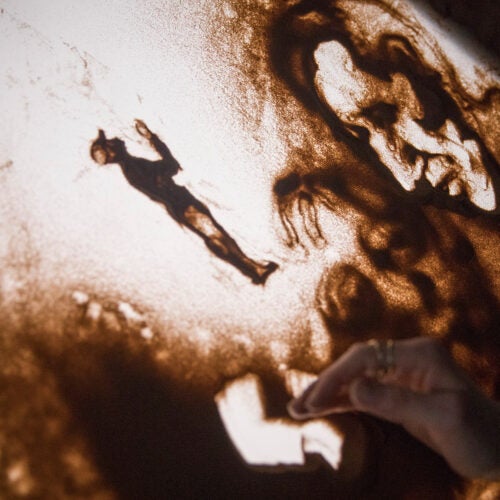 Experiences in Russia, Montana, and at Harvard converge in freshman Dasha Bough’s creations