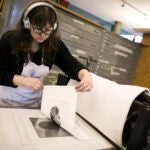 Studying art by making it

Experiences in Russia, Montana, and at Harvard converge in freshman Dasha Bough’s creations

Dasha Bough spent some of her earliest childhood in Russia before her family returned to her native Montana when she was 5 years old. A budding appreciation for fine art would send her back to St. Petersburg over several summers to take classes in oil painting and drawing at the Repin Academy of Arts.

“I love portraiture. Once I learned to draw a face, I never stopped. I butcher landscapes, but faces I love because I can pair them with narrative,” said the freshman, who lives in Weld Hall.

But then came a 2009 episode of “Ukraine’s Got Talent” featuring artist Kseniya Simonova, and Bough found herself inspired to try sand art.

“I am trying to push the techniques of an art form that’s still not widely explored,” said Bough, who works with a lightbox her grandfather built for her. “I love the idea of playing with negative space, and in sand art there are so many opportunities for storytelling. It’s hard to find an artistic medium that is at once distilled and sequential. In a sense, it combines drawing and fine art with narrative and animation in a way that quite literally reveals the artist’s hand as a character.”

“I’m usually a perfectionist, but the sand forces me to loosen up. You can’t get attached to an image that is about to be wiped clean.”
— Dasha Bough, pictured below in her studio

Like Simonova, who has created imagery about the toll of World War II, Bough found inspiration in history for one of her biggest works. “Boiling Point” tells the story of two important women in her life — her grandmother and Baba Sima, an elderly Russian friend. Bough used her iPhone’s time-lapse feature to record her work over two weeks, producing a nine-minute film whose soundtrack begins with a boiling kettle and ends with gramophone recording of the Russian song “Burnt by the Sun.”

“They both have a Cold War mentality,” said Bough. “My Grandma June lives on a farm on the Montana prairie that is bordered by Minuteman missile launch sites aimed at Russia. Baba Sima has lived with censorship and propaganda. I wanted to stay true to their parallel stories: the Russian Baba going about her daily life illustrating her humanity, and another lady doing the same in rural America. Reminders of the world they lived in are constantly resurfacing, but despite this, they absolutely love each other.”

Though Bough considered going to a dedicated art school, she chose to merge academic endeavors (advanced Russian, history of imperial Russia) found in small classes with projects that feed her creative spirit.

“I feel so fortunate — I don’t have a class with more than 12 students, and many have been with upperclassmen or graduate students,” she said. “I was concerned at first that Harvard might not have an art scene, but it does and it’s vibrant and unrestrained and so much more encompassing than I ever imagined it would be. I thought I’d be the lone artist and it’s the opposite. My friends are all intimidatingly creative.”

Bough wasn’t sure how she would continue to create sand art at Harvard, but lucked out with a roommate unperturbed by her lightbox and bags of fine-grain sand (slightly thicker than cocoa powder). She finds most of her material at hardware stores, but also experiments with coarser river sediment her sister scooped up near her family ranch in White Sulfur Springs.

“I’m usually a perfectionist, but the sand forces me to loosen up. You can’t get attached to an image that is about to be wiped clean,” she said.

Visual and Environmental Studies Professor Ruth Lingford was impressed by the “brave” young artist she met in her animation class in the fall.

“The interesting thing about Dasha is how Russian she is, though she’s not Russian,” Lingford said. “She seems to have absorbed the culture in some way that’s gone very deep. Russian art school has given her rigor of approach, and it’s beautiful to see her using that rigor to be much more experimental.”

Bough’s final project — a stop-motion story of her grandfather’s farm tools voiced by her elderly Montana neighbor — was a study in both creativity and tenacity, Lingford said.

“It wasn’t easy, but she persevered and when she got it, it just flew. It’s not just native talent. It’s a quality of very sharp intelligence and perseverance.”

Bough has immersed herself in arts and humanities studies in her first year at Harvard. She secured space in the Carpenter Center and has performed at TEDxHarvardCollege, using her creativity as a gateway into political discourse.

“Sometimes what I’m doing requires a decent amount of explaining,” said Bough, laughing. “My artistic expression these days is derived from quite literally playing in the dirt. I grew up with an appreciation for my family’s farming and ranching background and have an affinity for the earth and all of its unrefined qualities. Sand art allows me to stay close to dirt in an obscure but socially acceptable way.”