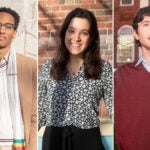 Harvard has announced the creation of its first University-wide conference center, a state-of-the-art convening and innovation hub that will serve as a universally accessible “front door” to welcome visitors to the University’s planned Enterprise Research Campus (ERC) in Allston.

Named in recognition of philanthropist David Rubenstein, the David Rubenstein Treehouse will be a venue for sharing and learning across disciplines and for collaboration with government, industry, and world leaders. A gift from Rubenstein will support the creation of the Center. He has a long history of giving and service to Harvard, including as a leader in the Harvard Campaign, and has served as a member of the Harvard Corporation since 2017.

Designed by architecture and urban design firm Studio Gang, led by Jeanne Gang, M.Arch. ’93, the architecturally distinctive conference center will feature multiuse gathering spaces throughout as well as a public ground floor where members of the local community and the Harvard community can engage and interact. The Center will be a focal point for events such as international summits, alumni gatherings, conference receptions, and workforce recruiting activities.

The Center will foster a dynamic new environment for teaching and learning across all Schools and academic disciplines, as well as provide a new resource for the University’s executive education programs, a place where students can gather to learn, reflect, and connect with the entire University.

“David and I have had many wonderful conversations about Allston’s role in Harvard’s future. With this generous gift to support a world-class conference center, he is helping to bring together entrepreneurship, innovation, and research for the benefit of everyone,” said Harvard President Larry Bacow. “I am not surprised that such a great friend and leader would be so supportive of a university that he has supported in so many ways. David is a true friend — to Harvard and to me — and I am deeply grateful.”

“I am honored to help Harvard with a conference center that will serve as a convening place for academic and business visitors, as well as Harvard faculty and students, at the exciting new Enterprise Research Campus Harvard is building in Allston,” said Rubenstein. “Even with all that is possible virtually today, having a space to come together and collaborate unlocks the potential of the brightest minds. I appreciate Larry Bacow’s commitment to the future of Harvard, the Enterprise Research Campus, and Allston.”

The conference center will create a space for industry partners and visiting scholars and guests from around the world to collaborate with faculty and students to discuss issues at the forefront of their fields; it will also serve as a venue for thought leaders to convene to launch new initiatives.

The announcement follows the unanimous approval from the Boston Planning and Development Agency Board for the first phase of Harvard’s much-anticipated Enterprise Research Campus.

The conference center will be part of the “Phase A” development, which consists of 900,000 square feet of mixed-use development that includes residential areas, office and lab space, a hotel, restaurant and retail locations, as well as new publicly accessible open and green spaces. Affordable housing will comprise 25 percent of the available residences.

A building like no other at Harvard, the Center is designed as a beacon and welcoming “front door” to the ERC, reimagining the conference center as a low-carbon, community-centered hub for convening, said lead architect Gang, whose Studio Gang is a world-renowned practice headquartered in Chicago with offices in New York, San Francisco, and Paris. An alumna of the Harvard Graduate School of Design (GSD), Gang is also a professor of the practice at GSD, where her areas of focus are sustainability, reuse, and resiliency.

A beacon in more than just image, the Center is leading by example with a design that achieves ambitious sustainability goals, said Gang, who noted the building adheres to Harvard’s Healthier Building standards and the University’s Sustainability Plan. The building is also targeting some of the highest sustainability standards addressing human and environmental well-being. This all-electric building will receive its power from Harvard’s lower-carbon, climate resistant District Energy Facility. The building’s roof and bioswales will be used to harvest rainwater, and its photovoltaics will provide an alternative clean power source.

As its name suggests, the building’s design was informed by the branching structure of a tree, and the experience of climbing up into and inhabiting a treehouse. “The building’s visible mass timber columns and beams emphasize the branching structure — you can see the V-shaped columns extending out and the diagonals of the cross-bracing reach all the way to the roof, becoming finer the higher they rise,” said Gang. The resulting spaces on the upper levels “feel almost suspended within the surrounding tree canopy, like being in a treehouse — a very special destination.” Gang describes them as being enhanced “with natural daylight, great views, and a balcony where you can step outside and look out over the landscape and the campus.” The building will also be integrated into the ERC’s Greenway plan.

Wood, a renewable material, will serve as a core component to the building’s design aesthetic and sustainability approach. Most notably, the building will use mass timber for its above-ground structure instead of conventional concrete or steel, the manufacture of which emits significant carbon. The wood columns and beams will be part of an open interior, showcasing the building’s sustainable design, Gang explained. “Visitors will really be able to see it and feel it — and know that they are in a timber building.”

Gang said she hopes her design helps “encourage collaboration and fluid communication, setting up the kinds of open-minded conversations that can help solve some of the most pressing problems in the world.”

The building will be done by a joint venture of construction management firms Consigli and Smoot. Tishman Speyer, master developer for the ERC, will serve as project manager. Consigli has completed several successful projects for the University, and this will be Harvard’s first with Smoot. Smoot is a minority-owned construction management firm with significant institutional experience and has partnered with Consigli on other projects. The innovative venture aligns with the University and the team’s commitment to ensuring greater access and opportunity for local, minority and women-owned firms.

A visionary gift from a longtime University citizen-steward

Rubenstein, has been a longtime friend to the University. One of Harvard’s most engaged volunteer leaders, he is known as an experienced steward and dedicated supporter of educational and cultural institutions. He is co-founder and co-chairman of The Carlyle Group, the global investment firm he formed in 1987.

Over the years, Rubenstein has given generously to Harvard, including support for the Kennedy School, the Business School, and the president’s discretionary fund. At HKS, his gift helped enable the construction of the David Rubenstein Building, which houses the Center for International Development, among other uses; he supports the School’s efforts to recruit pre-eminent scholars and leading practitioners; and a fellowship in his name funds students in the HKS/HBS joint degree program. Another fund in his name provides funding for HBS’s Immersion Experience Program (IXP) MBA program.

Rubenstein’s extensive philanthropic endeavors include service as chairman of the board of trustees of the John F. Kennedy Center for the Performing Arts, the Smithsonian Institution, and the Council on Foreign Relations. He is a trustee of The National Gallery of Art, Johns Hopkins Medicine, University of Chicago, Memorial Sloan-Kettering Cancer Center, the Lincoln Center for the Performing Arts, the Institute for Advanced Study, the Brookings Institution, and the World Economic Forum. He is president of the Economic Club of Washington and is also involved with the American Academy of Arts and Sciences, the Madison Council of the Library of Congress, and the Advisory Board of the School of Economics and Management at Tsinghua University in Beijing, China.

He is widely known for his transformational gifts for the restoration or repair of several of the nation’s monuments and buildings, including the Washington Monument, Lincoln Memorial, Jefferson Memorial, Monticello, Montpelier, Mount Vernon, Arlington House, Iwo Jima Memorial, the Kennedy Center, the Smithsonian, the National Archives, the National Zoo, the Library of Congress, and the National Museum of African American History and Culture. Rubenstein is an original signer of The Giving Pledge.

A respected interviewer and media figure, he hosts “The David Rubenstein Show” and “Bloomberg Wealth with David Rubenstein,” and is the author of several books, including “The American Story” and “How to Lead.”