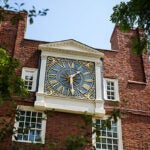 David Rubenstein will assume role in July of 2017

David M. Rubenstein, a noted figure in finance and philanthropy, founding chair of the University’s Global Advisory Council, a widely experienced trustee of educational and cultural institutions, and one of Harvard’s most engaged volunteer leaders, will become the newest member of the Harvard Corporation in July 2017.

In accordance with the University’s charter, Rubenstein was elected today by the Corporation as a Fellow of Harvard College, with the consent of the Board of Overseers.

Rubenstein’s “acumen in finance, his experience both in leading a complex organization and in serving as an institutional trustee, his capacious intellect and global outlook, his devotion to universities and to the arts and culture, and his capacity to inspire generosity in others all promise to serve the Corporation and the University well,” said President Drew Faust and William F. Lee, the Corporation’s senior fellow, in a statement announcing the appointment.

Rubenstein, they added, “has served on a remarkable range of nonprofit boards reflecting his equally remarkable span of interests — in higher education, the arts, public policy, medicine, international affairs, and American history and culture.” At Harvard, they noted, he serves as the inaugural chair of the Global Advisory Council, an advisory group of alumni and friends from 25 countries; as one of the co-chairs of the ongoing Harvard Campaign; and as the “indefatigable” chair of the Campaign for Harvard Kennedy School.

“Harvard is a truly unique global institution of higher learning and cutting-edge research, and I am humbled to be associated with such an institution in this way,” said Rubenstein. “I hope John Harvard would approve.”

Rubenstein’s election follows the arrival on the Corporation in January 2016 of Shirley Tilghman, president emerita of Princeton University. Tilghman was elected after the sudden death last summer of James F. Rothenberg, a longtime member of the Corporation and former treasurer of the University, who had been expected to conclude his Corporation service at the end of June 2016. With Nannerl O. Keohane, president emerita of both Duke University and Wellesley College, planning to step down at the end of June 2017 after 12 years of Corporation service, Rubenstein will take up his duties then. In view of Rothenberg’s death last summer and Keohane’s anticipated departure in 2017, Faust and Lee said, “We are fortunate to be able to welcome — in Shirley Tilghman and, before long, in David Rubenstein — two such accomplished and collegial leaders to help guide the University forward.”

Rubenstein is co-CEO of The Carlyle Group, a global alternative asset manager based in Washington, D.C., which he co-founded in 1987. The firm manages more than $170 billion in assets through 36 offices worldwide.

After law school, he entered private legal practice, then served as chief counsel to the U.S. Senate Judiciary Committee’s Subcommittee on Constitutional Amendments. He was deputy assistant to the president for domestic policy in the Carter administration from 1977 to 1981. Immediately before co-founding Carlyle, he practiced law with the firm then known as Shaw, Pittman, Potts & Trowbridge.

An experienced trustee of numerous nonprofit institutions, Rubenstein will step down as chair of the Duke University board of trustees on July 1, 2017, at the conclusion of his term. His array of other board engagements includes his work with the Brookings Institution, the Institute for Advanced Study, the Kennedy Center for the Performing Arts, the Memorial Sloan Kettering Cancer Center, and the University of Chicago, among other institutions. He is also president of the Economic Club of Washington.

An avid supporter of cultural, historical, and educational initiatives, Rubenstein was an early champion of Bill Gates and Warren Buffett’s Giving Pledge. His own notable acts of philanthropy include support for the restoration of both the Washington Monument and the Lincoln Memorial, for the National Archives’ continuing display of an original 1297 Magna Carta, for the Smithsonian Institution’s establishment of the National Museum of African American History, and for the panda habitat at the National Zoo.

Rubenstein is married to Alice Rogoff, M.B.A. ’78. They have three grown children, two of them graduates of Harvard College. He has served on the Committee to Visit the Harvard Kennedy School of Government at Harvard and the Harvard Business School Board of Dean’s Advisors, in addition to his other Harvard roles.