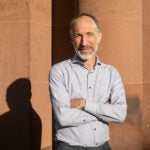 Legendary Battle of Himera was triumph of Greek heroism, kind of

Harvard scientists on Monday conspired with one of the nation’s top barbecue chefs to slip some science into his cherry-wood-smoked pork ribs. The academic bits came compliments of David Weitz and Pia Sörensen, organizers of the 13-year-old “Science and Cooking” lecture series. Its latest installment Monday evening was a damp and smoky, affair that, despite the threat of rain, lured an audience of about 80 of the barbecue-curious to the patio outside Harvard’s Laboratory for Integrated Science and Engineering.

The smoke came compliments of Bryan Furman, an Atlanta pitmaster who in 2019 was named one of Food and Wine magazine’s best new chefs. Furman, whose appearance Monday was an encore from a year earlier, is a former welder who has blended his knowledge of the transformative power of heat with an appreciation for the heritage hogs raised on his grandparents’ South Carolina farm, where he spent time growing up.

Furman said science was one of his favorite subjects, but his teachers weren’t able to make it as accessible, practical — and alluring — as he aimed to make his talk, “The Thermodynamics of Barbecue.” Barbecue, he said, could be used as a medium to teach not just science, but art and business as well.

“This wasn’t what they were talking about when I was in school,” Furman said. “When you’re teaching students like this, it keeps them more involved and interested, compared to just sitting in class.”

Weitz, Mallinckrodt Professor of Physics and Applied Physics at the Harvard John A. Paulson School of Engineering and Applied Sciences, kicked off the session with some scientific basics, describing diffusion of compounds and heat, both of which work to impart texture and flavor during the smoking process. He also offered a “Science and Cooking” standard: the equation of the week, which elicited appreciative applause. This particular one describes the distance that heat diffuses into a substance, L=√4Dt, where L is the distance heat diffuses, t is the time heat has to work, and D is the substance’s diffusion coefficient.

Weitz noted that the diffusion coefficients were similar for several very different foods — beef, strawberries, chicken, potatoes, and water — mainly because water is a major component of each.

Furman took over from there, moving around the large, cylindrical smoker set up on the patio as he talked, occasionally stepping through the steady plume drifting and billowing from its chimney. He detailed the practical side of heat’s diffusion into the meat, carrying the cherry-wood flavor and reddish color. In addition he and Weitz discussed the process by which blood in bone marrow diffuses into the meat and that a red-colored “smoke ring” is a sign of properly cooked barbecue, done low and slow.

Furman also talked about barbecue techniques which, judging by questions from the audience, were a key interest. Time is an important element, but he cautioned against using a clock to tell when it’s done. Instead, he said, go by the meat. For ribs, he doesn’t use a thermometer, he pokes it with a finger near the bone. If it goes through, it’s done. On Monday, for example, he put the ribs on at 1 p.m., and they were done after about 3½ hours. He kept them in the smoker at a lower temperature, so they’d be hot for the audience to sample.

Furman described using a charcoal chimney to get the smoker going, why he doesn’t use sugar in his sauces and rubs (it burns), how to rescue dried-out white-meat chicken (don’t bother, just get dark meat, which is hard to dry out), and emphasized the importance of using a good cut of meat, especially for brisket. He also said, that, like many things in life, in barbecue, practice and repetition builds skill.

“Consistency is the key in barbecue,” Furman said. “Not just barbecue, but cooking any food. If I have nothing to do, I’ll be in my driveway, cooking a brisket. I’m not going to eat it; I’m just going to cook it.”

The lecture series is an outgrowth of a Harvard College class on the same topic and, as he did last year, Furman spent the second day of his two-day visit to campus talking to students, who got to sample his ribs on Tuesday.

Sörensen, senior preceptor in chemical engineering and applied materials, said that over the years of organizing the talks and teaching the class, she’s gained an appreciation for the similarities between how cooks and scientists approach their work, as well as the powerful draw that talking about food exerts on audiences.

“I think there is something about food that touches everyone,” Sörensen said. “They’re also curious. They want to know how to make a better brisket. They are scientists without realizing it.” 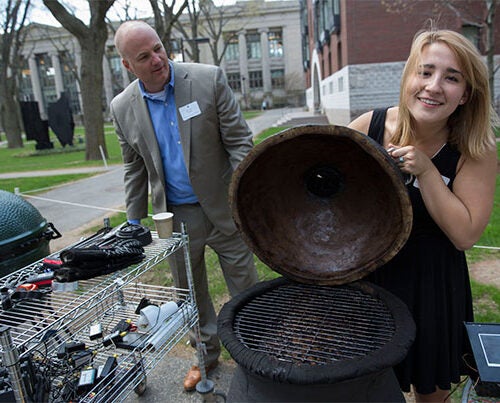 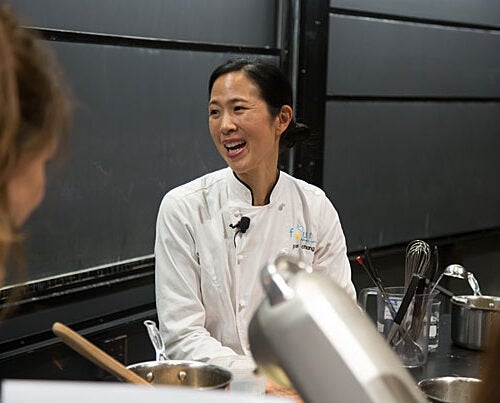