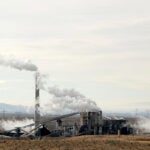 If only science always tasted so good.

Professor Kevin “Kit” Parker set 16 students in his “Engineering Sciences 96” class to a real-world test of teamwork, technical skill, and dedication this semester, assigning them the 14-week task of building a better barbecue smoker.

Along the way, they had to decode the arcane process of smoking meat, applying science to a traditional Southern art form with the aim of simplifying it for the novice and updating it for the 21st century. They had a real-world client in Williams-Sonoma, the company that sponsored their efforts; real-world competition in their experimental control, a high-end smoker called the “Big Green Egg”; and the real world itself to contend with, in the form of snowstorms and subzero temperatures for their Saturday smoking sessions.

“I was eating it last night as it came off the smoker, and it was fantastic,” said Patrick Connolly, Williams-Sonoma executive vice president and chief marketing officer, who was at an end-of-semester barbecue Monday where the culinary results were presented.

Connolly was among several dozen guests, students, faculty, and staff at the barbecue, held just outside Harvard’s Maxwell-Dworkin building. The barbecue followed an hour-long student presentation of the scientific results of the project in nearby Pierce Hall. Guests were able to sample brisket from the student-built smoker side by side with that from the control unit. After 220 pounds of brisket, 880 man-hours of smoking, and countless more hours of research, design, and construction, the students appeared to have pulled off the feat.

“This is first-class brisket,” said Dave Schaefer, a barbecue chef who presented a guest lecture to the class in March and returned for the public unveiling Monday. “This is as good a brisket as I’ve had in months and months.”

The students’ learning curve was incredibly steep. First, they had to understand the basics, the current art of cooking brisket — a meat cut that is tough to get right and, because of the connective tissue it contains, requires long, slow cooking to make it tender.

In their presentation, students described their initial research, consulting expert chefs and authorities in everything from heat transfer to food chemistry to ceramics. The fundamental problem, they said, is temperature control. Because brisket has different parts — the fat cap, the flap, and the point — the temperature has to be controlled carefully to ensure it cooks uniformly. In addition, enzymes that can break down the tough connecting tissue take time to work but break down themselves at higher temperatures. That means that not only does the brisket have to be cooked at low temperatures for 12 to 15 hours, that temperature has to rise to the primary cooking temperature slowly over several hours.

The students found that maintaining the proper temperature is tough to do. Even the high-end control smoker had hot and cool spots, with as much as a 50-degree difference across the cooking surface, which caused the meat to cook unevenly.

To even out those hot spots in their design, students borrowed the concave shape of a power plant cooling tower, called a “hyperboloid.” That shape forces the smoke to mix in the narrow waist, evening out the temperature, before it expands again to engulf the meat. The shape also creates eddies of smoke above the cooking surface, bathing the brisket in the wood fumes, which imparts flavor during the cooking process.

With the assistance of the Harvard Ceramics Program, the students made their cooker out of clay, creating a half-size prototype and then a full-scale model that took five weeks to shape and fire. They added modern electronics: temperature sensors, automatic vent fans, and a small computer to control the fans and regulate how much oxygen the fuel received — and thus the overall temperature.

To top it all off, they connected the computer to the Internet and created a smartphone app that lets a chef monitor the hours-long process without constantly having to open the top, or even — in the middle of winter — to go outside. The app provides recipes for planning, shopping sites for supplies, data from the smoker itself to monitor cooking, and social media for sharing results.

Juniors Paul Kaczor and Jack Zhou said they enjoyed the experience, even though the Saturday smoking sessions required them to start at 3 a.m. through the worst of New England’s record-setting, snowy winter. At temperatures as low as minus 1, they had to shovel off a spot for the smoker and then struggle to light the fuel in the cold and wind. It wasn’t as simple as just setting up the smoker, because they were collecting data at the same time, so they also had to ensure that the experiments were set up and the equipment was working properly.

“I loved it,” Kaczor said. “I’m a huge fan of meat. I figured if we have to do all this each week, at least we get to eat brisket on weekends … I had an absolute blast.”

Fittingly, given how long brisket has to cook, the course itself incubated for two years. That was when Parker, the Tarr Family Professor of Bioengineering and Applied Physics and core member of the Wyss Institute of Biologically Inspired Engineering, visited a cooking contest in Memphis and realized how little science had touched the practice of barbecue.

“I was looking at the most god-awful contraptions I’d ever seen,” Parker said of the smokers used by competitors. “It dawned on me that we really don’t understand the fundamental rules of how you smoke. It’s more like a crazy art form.”

Parker and teaching fellow Peyton Nesmith, visited with barbecue chefs and gathered the background knowledge needed to set their students to the task. Parker praised the entire class, saying the students were up to what proved to be a challenging project, working nights and weekends, as well as in class. Along the way, they mastered not just cooking, but design, computer modeling, heat transfer, and other skills.

“We took this art form to a science,” Parker said. “Everything came together. We had a good client, a good mission.”

Though Connolly was impressed with the results, he stopped short of saying the “Harvard Smoker,” as the students dubbed it, would soon be in stores. There are many steps between a research project and an actual product, he said, but elements of what the students devised — the hyperboloid shape and the electronic temperature controls —could warrant further investigation. The goal, he said, is to make it easier for a backyard barbecue to produce results while letting the chef enjoy his or her company.

“When you think about outdoor cooking, very seldom is it done for one person. It’s family entertaining, a group sharing a meal together,” Connolly said. “For anyone doing it, you’re torn between spending time with them and making sure you get a good result.”

Three of the students aren’t done yet, according to junior Jordan DeGraaf. Though the brisket came out well, the prototype had several drawbacks. The smoker’s ceramic body meant it held heat well, but it cracked when used, probably due to problems in its construction. It is also heavy, topping 300 pounds.

DeGraaf, a bioengineering concentrator, said she and her classmates will be working on campus this summer to refine the design. DeGraaf, who grew up in New Mexico, said she had a neighbor who would smoke brisket for them, but she never thought of the science behind it.

“I’m from the South, and I really enjoy my brisket,” DeGraaf said. “I hadn’t thought of it as an engineering problem before this class.”