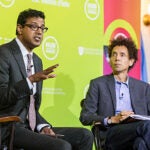 Not every academic lecture is accompanied by the smell of caramelizing sugar, and most don’t include a break for sugar cookies with buttercream frosting.

Entries in the “Science and Cooking” lecture series, which is based on a course at the Harvard John A. Paulson School of Engineering and Applied Sciences, pair short instructor talks on relevant science with longer, hands-on cooking discussions led by chefs.

Sugar, it turns out, does a lot more in the kitchen than merely sweeten. In fact, Chang said, there are only a few desserts in which sugar only makes the dish sweeter: chocolate bars, fresh fruit, yogurt, or gelatin desserts.

For other creations, Chang said, sugar plays multiple roles. It can draw moisture out of the air, extending the counter life of baked goods. It lowers the freezing point of frozen desserts, keeping sorbets and ice cream softer in the freezer. It aids in browning pastries, inhibits gluten development in cake flour, and makes pastries crispy. It also stabilizes egg foams, buttressing the frothy bubbles of meringues.

Chang demonstrated the latter, using a portable burner and mixer to whip egg whites into meringues, including one without sugar that was set aside and slowly slumped as the talk progressed. She also demonstrated the “stages of sugar” in which sugar water is boiled until it reaches certain temperatures, with different properties at each that resulting in different, yet familiar, sweets. As the temperature rises and water boils off, the mixture becomes thicker and sweeter, allowing it to boil at ever-higher temperatures.

Pia Sorensen, one of the course instructors and senior preceptor in chemical engineering and applied materials, introduced the talk. Sorensen spent a few minutes talking about viscosity — important for “mouth feel” — and warming up the crowd with a quiz-show-like giveaway of aprons to those who correctly answered questions about the prior week’s talk. Sorensen prompted the audience to “applaud for formulas” as she showed one for viscosity — the topic of the week — on the screen.

As the viscosity — and temperature — of Chang’s sugar-water mix increased with boiling, she discussed how the “thread” stage is basically a water-sugar mix, suitable for concoctions like sweetened iced tea. Then comes the “softball stage,” where if the mixture is suddenly cooled it forms a sugary ball, suitable for making frosting and fudge. The firm stage allows the chef to make caramel, while the hard stage can produce rock candy.

Next come the soft crack stage for making taffy, and the hard crack stage for candies like lollipops. The final stage, caramelizing, keeps the mixture boiling until it browns. Chang allowed the mixture to reach that stage and then, to create praline, threw in a handful of roasted almonds and poured them out to cool.

Chang took questions as she worked, discussing the finer points of the process with audience members clearly more interested in the cooking than the science. She also talked about life at her bakery, where recipes are perfected, baking schedules are dictated by the food, and failure is an intrinsic part of the operation.

The failure owes to a commitment to trying new recipes, which typically take two to three attempts to get right. Inspiration for those dishes comes from a wide variety of sources — from dishes she or a staffer might have had that combine unique flavors, to social media like Instagram.

She also revealed the most important characteristic of a pastry chef:

“Much of being a pastry chef is being patient,” Chang said. “If you rush things along, you’ll mess them up.”