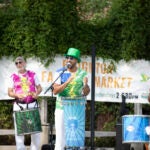 Annie Julia Wyman studied creative writing at Stanford, earned her master’s and doctoral degrees in English at Harvard, and seemed destined for a career in academia. Then Hollywood came calling. Wyman is the co-creator, with Amanda Peet, of the Netflix hit “The Chair,” a six-part dramedy about Pembroke, a fictional New England college, and the first non-white female head of the school’s English Department, played memorably by Sandra Oh. Wyman spoke with the Gazette about her time at Harvard, her transition to screenwriting, and why comedy is so central to her work and to the human condition. The interview was edited for clarity and length.

GAZETTE: Where did your love of literature come from?

WYMAN: I had a grandmother who was an English teacher, and my parents are both real readers. I’m also a middle child, between a younger brother and older twins, and I was the clumsy, introverted nerd of the family. (To be clear, my parents are very nice people and would not describe me that way! They’ve always supported me in whatever weird thing I wanted to do.) I spent some time trying to be cool like my brothers and sister, but that seemed like it was ultimately going to fail. In the hullabaloo of our household, my world was in my books.

WYMAN: Graduate school is both glorious and so, so hard. It’s difficult emotionally, it’s difficult psychologically, it’s difficult intellectually. I had wonderful mentors who let me write a dissertation about jokes, and I don’t know that I could have asked for anything better. But for me, the signal experience of being at Harvard was being around my peers and being challenged and loved by them through this knock-down, drag-out process. In a way, you become this creature only other creatures who are doing the same weird thing can understand. I’m in daily contact with the women I lived and worked with in our terrible rundown Somerville duplex and I still miss them.

GAZETTE: Where did your interest in humor writing come from, and what does comedy reveal about the human condition?

WYMAN: I’m glad that you’re not my dissertation committee — the last time I answered a version of that question I was terrified! I guess maybe I can start with an anecdote. I was once writing a seminar paper for Helen Vendler, who was still teaching at that time. It was about comedy and a poet you wouldn’t necessarily look for jokes in — maybe Wallace Stevens. I remember she said to me that there are two kinds of people in the world: comedy people and tragedy people. And she said most people are tragedy people because you need to have a sense of gravitas and dignity, you know, as you move through the wild indignity that is life on earth. And then she said I was the other kind of person, someone who might have a harder time expressing directly what I wanted, intellectually or otherwise, because I didn’t touch down in quite the same way. For a second, I couldn’t decide if I should be discouraged or even hurt. Was I unserious? Undignified? But then, in almost the same breath, Helen recounted a little story about an old friend of hers who was also a comedy person. This person died a very painful death, and his last words were: “Tell them I had a great time!” She burst out laughing, just delighted by her memory of this other comedy person, and I went from feeling inadequate to feeling seen and valued for exactly what I was. That’s the power of a great critic, I guess.

But to answer more fully: The upshot of my dissertation was that, as a mostly confident comedy person, I think human life is better explained by the idea of comedy than by tragedy. I think my graduate work was sort of philosophy under the cover of literary criticism, if it was anything. Comedy is integrative, and joyful, and constructive, and I just wanted so badly to say we should be living under a comic dispensation, that we should try to understand what we do together as human beings that way. If you look at two scenes from any narrative work of art, the one that is tragic will likely be more predictable than the one that is comic, because tragedy usually only ends one way, in some form of alienation or violence. Whereas comedy is like this wild aesthetic vastness, and that’s sort of the point of it, that anything could happen, and we’d all be delighted by it.

GAZETTE: “The Chair” deftly combines, and balances, tragedy and comedy. How does that happen?

WYMAN: Get ready, because this is me first as scholar, then as writer. Pretty much no matter what I’m working on, I come back to a short essay Theodor Adorno wrote about how the purpose of art is to disclose while enclosing the violence of the world. You show what is painful, what is sorrowful. The loss of a spouse, the end of a beautiful career, the disastrous lack of intelligibility between mother and daughter — these sorts of really difficult things that happen in the show or things even more difficult. But you also build a frame around them, you give them over so that they can be shared. In every comedy, there is uplift, optimism, integration, a shared experience, a shared future that surrounds whatever loss. Adorno was the biggest crank of all time, but even he came to the conclusion that art itself was in a similar sense lighthearted. I try to keep that in mind on any writing project. I think that’s why I don’t have a lot of trouble with mixing tones or genres. I literally think it’s all comedy in the end and the rest is just internal adjustment.

GAZETTE: How did you transition to screenwriting full time?

WYMAN: My B.A. is in creative writing — technically in poetry writing, though I thought I was going be a fiction writer with, I don’t know, the nicest prosody. I did some criticism and some freelance journalism, and by the middle of my Ph.D. I felt like this academic person with some phony creative frills. And then I got a Facebook message from a friend from Stanford. He wanted to go to dinner the next time I was in New York, and we met at this alarmingly fancy restaurant and as we were eating boar ragù he just came right out and said, “Would you ever want to write a movie? I make movies for a living now.” I said, “No.” And then I went home and tried to become the person he thought I could be, but in secret. I wasn’t going to pass myself off as a screenwriter until I knew if I was good at it.

Over the next year or so, the wonderful creative writing faculty at Harvard let me audit screenwriting classes. I was teaching a little course on comedy and spending all my time with brilliant friends who would engage openly with whatever I wanted to think about or make. I wrote a couple of chunks of feature films, and then out of interest, or some feeling that TV was where interesting stuff was happening, I wrote my first pilot ever in a TV writing workshop. It was an hourlong comedy, and I sent it to my friend from Stanford and he optioned it the same week I submitted my dissertation. A little way down the road, after I had moved to L.A., Amanda Peet read that script and it convinced her I could write.

GAZETTE: You’ve said the bulk of your creative writing training was in poetry. Does that help inform your writing for TV?

WYMAN: I have the kind of brain that thinks of narrative as horizontal and poetry as vertical. Narrative is walking around, you kind of move along a chain of cause and effect, stuff goes by around you or out the car window or whatever. But poetry is transcendent. The movement of it is upward. Time stops. If I had to think through how that connects to my screenwriting, I’d say I want moments of maximum emotional, almost spiritual effect, as much as I want a story that moves forward. I mean, I kind of suspect those are the same kind of moments we share when we laugh together, when someone rearranges our ordinary horizons with a punch line, but maybe that’s a lecture for another day.