Running, walking, cycling, and rolling together 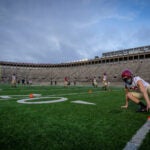 Across the span of four days in mid-November, Harvard students, faculty and staff, along with alumni across the globe, will all be moving, literally and figuratively, toward the same goals. In a one-of-a-kind, University-wide virtual 5K called Harvard Moves, participants will “run, jog, walk, cycle, or roll” to promote wellness, build community, and raise funds for student financial aid.

Harvard Moves comes at a time when the University community is looking for creative, healthy ways to connect virtually. The project got started when an alumnus and a professor took a long run along the Charles. The two had just recently met; both were veteran marathoners. They talked how much their hobby helps with physical and emotional health and how hard it can be to keep up with exercise.

That put them on the path. On Nov. 12-16 University affiliates in nearly every state in America and in 76 countries on six continents will participate in the event, traversing the equivalent of a bit farther than 3 miles. So far, more than 1,800 in the community are registered to complete a combined total of 12,000 kilometers, or more than 7,450 miles.

“I am looking forward to covering new ground with alumni, students, faculty, and staff from across the University and around the country and the world,” said President Larry Bacow. “As a longtime runner, I have a deep appreciation for what physical activity does for individual and community well-being. This is a wonderful way for all of us to connect with one another, to support our students, and to keep moving — worthy goals made even worthier by our current circumstances.”

The Harvard Alumni Association (HAA) and the Harvard College Fund joined forces to make Harvard Moves possible, but the initiative itself was the brainchild of Bob Manson, M.P.A. ’04, a committed marathoner and member of the HAA board of directors, and Daniel Lieberman ’86, the Edwin M. Lerner II Professor of Biological Sciences and professor of human evolutionary biology, also a marathoner, and author of the upcoming book “Exercised: Why Something We Never Evolved to Do is Healthy and Rewarding.”

About a year ago, Manson was headed to Cambridge from Ireland, where he lives, for his first meeting as a new HAA board member. He decided to email Lieberman after a friend sent him a link to a video of the professor talking about the biology and evolution of running, something Manson said piqued his curiosity as a long-distance runner. The two decided there was no better way to meet than on a run.

“We met on a sunny fall Sunday morning at the front door of the Harvard Club of Boston,” Manson recounts. As the two ran about 12 miles along the Charles River, they shared ideas of how to help to build community through physical activity, Lieberman said, including “the challenges of continuing to be physically active.”

An idea began to form, and Lieberman later reached back to Manson for help. “Bob has run something like 50 marathons, many to raise money for charity, and he is a very active alumnus — in every sense of the word ‘active,’ so he was the first person I thought of to help start Harvard Moves.” The two then brought the idea to the HAA and the Harvard College Fund (HCF), which became their partners.

The goals of Harvard Moves were drawn directly from the unique perspectives and deep level of experience that Manson and Lieberman shared. First, they both agreed they wanted to help build community at time when it was needed most. “Studies show that people are feeling more isolated than ever, and we are struggling with many mental and physical health issues — all of which have been robustly demonstrated to be ameliorated by physical activity,” said Lieberman.

As an evolutionary biologist, he understands how “community has always been fundamentally intertwined with both walking and running.” Ever since humankind’s days as hunter-gatherers who would go out in groups, “We have been walking and running together to help each other.” 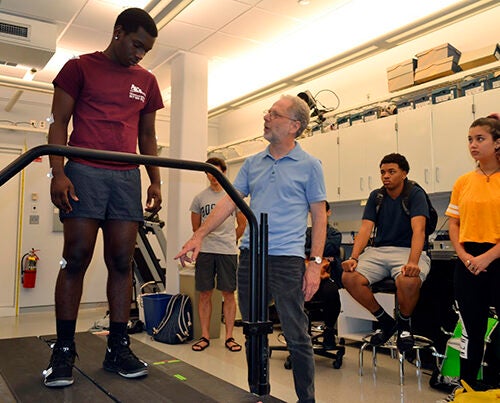 Manson has his own perspective on the joys and benefits of running. He has been running marathons since 1996, and is two marathons shy of 60 total, but he still loves “the simplicity and uncomplicated nature of it,” he said. “I turn to running for my own fitness and peace of mind.” He also likes the challenge. “I went from running two marathons a week apart, to running two marathons back-to-back, to then doing an Ironman, followed by a 50K race, then the Comrades Marathon in South Africa, which is 56 miles.” He has even run a 250-kilometer race in the Sahara Desert.

For Manson, running is also a way to make a difference by raising funds for good causes. For example, while he was at Harvard in 2004 he ran the Boston Marathon to raise money for the New England Shelter for Homeless Veterans. After his son George was born in 2009 with Down syndrome, Manson said he started raising money for Down syndrome charities and the Special Olympics. As a volunteer with the HAA, Manson has seen how many alumni have reached out, especially since the pandemic, to support students, and he thought this would be yet another opportunity to help. For Lieberman, raising funds to students was inextricably linked to one of the aspects he most loves about Harvard — “Our mission is to make the world a better place and the most fundamental means to do that is to recruit and teach diverse, talented, passionate students.”

Coming full circle, for his run Lieberman plans to go the extra mile (actually quite a few extra miles) and do a half-marathon along the Charles River, while Mason likewise will run a half-marathon on the College’s Dublin campus, where he studied law as an undergraduate.

Register for Harvard Moves: 5K Your Way. Participants in the 5K can choose to support Harvard students when they register by giving to Harvard financial aid initiatives. Participants will be able to share pictures, celebrate their successes, and motivate and inspire each other by tagging @harvardalumni and using the hashtag #HarvardMoves during the program.