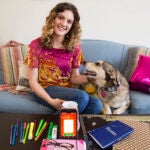 Roger Bannister, celebrated for breaking the four-minute mile in 1954, died last month at 88. For many, the news brought to mind a simpler — albeit slower — era on the track, and highlighted a distance often overshadowed by races both shorter and longer.

Daniel Lieberman, chair of Harvard’s Department of Human Evolutionary Biology, has through his writing and research deepened our understanding of the role of running in human survival. He’s also known for having helped set in motion the barefoot-running boom by emphasizing how forefoot strikers like Bannister more closely mirror our ancestors than the heavily shod heel-strikers of today.

Ahead of lining up for his eighth Boston Marathon, Lieberman shared some thoughts on the past, present, and future of speed, including the history-making performance of Roger Bannister, whom he once met.

GAZETTE: When did you meet Roger Bannister?

LIEBERMAN: Every year there’s a conference at the Royal Society of Medicine right before the London Marathon. The first time I spoke there — I think it would have been 2006 or 2007 — I couldn’t take my eyes off an elderly fellow with a tweed suit sitting in the front row, looking very engaged. I remember wondering if it was Roger Bannister. They had a lunch for the speakers at a fancy restaurant right near the Royal Society, and they seated him next to me.

We ended up having lunch together and chatted for hours. We talked about everything under the sun, but a lot about feet and running. I remember at one point he took off his shoes to show me his arch — this is at a fancy London restaurant. It was a treat to talk to him because he was so intellectually engaged in the science and physiology of running.

GAZETTE: Do his arches look any different? Any hint of what might have set him apart?

LIEBERMAN: (laughing) I think he had pretty typical feet for a septuagenarian.

He did talk about the kinds of shoes that he wore back in the day, and was fascinated by — and not particularly approving of — how running shoes had gotten so built up. He, like any fast miler, was a forefoot striker. We published a few years later the paper in which we made the argument that, essentially, prior to shoes pretty much everybody ran the way Bannister ran. He felt that was clearly the best way to run.

I remember him describing how he had his shoes made by a cobbler in London. You couldn’t go to a shoe store back then and buy a pair of running shoes. He basically had to have his shoes custom made. I remember he discussed how hard it was to get the right kind of material — light but durable enough not to fall apart.

One thing that was amazing about his achievement was that he did this before the modern era. Everything was completely amateur. When he broke the four-minute mile, he was a young doctor and took the train up from London that morning. He wasn’t a professional runner. He just did this on the side, while still devoting the majority of his energy to being a doctor and to his research.

LIEBERMAN: It was a Moroccan named El Guerrouj …

LIEBERMAN: Three minutes and 43 seconds is considerably faster than four minutes. But there are still not that many people who’ve broken a four-minute mile. I think fewer than 1,500 people on the planet have ever run that far in less than four minutes. And it’s not for lack of trying.

GAZETTE: Is there a physiological limit that humans can’t go beyond?

LIEBERMAN: There must be. If you look at the curve of mile time against year, that curve is definitely slowing down, but it hasn’t flattened out. It will at some point; the question is where.

A good example of this principle is horse racing. Horses have evidently hit their speed limit and are not getting any faster. Since 1940, Kentucky Derby times have essentially remained unchanged for a number of reasons.

So, yes, there must be a limit for humans at some point. It is true, every once in a while there is a big leap, but those leaps are going to get smaller and more incremental. Nobody’s beaten El Guerrouj’s record in almost 20 years, so that’s saying a lot.

Keep in mind also that the mile is an especially challenging distance. We tend to think about extremes in running. At one end are the explosive, all-out, pure power events, like the 100 meters, and at the other the endurance events like the marathon and longer. But between 800 meters up to five kilometers, runners have to precisely tune their bodies and their strategies to be good at both speed and endurance. That balance is really hard to get just right.

“At one point he took off his shoes to show me his arch — this is at a fancy London restaurant. It was a treat to talk to him because he was so intellectually engaged in the science and physiology of running.”
— about meeting Roger Bannister

GAZETTE: I imagine race strategy is important, but these top runners probably have that aspect of the race down.

LIEBERMAN: There’s still some debate. I’m not an expert on this, but runners endlessly debate whether to run what’s called “even splits” — run each quarter-mile the same speed — or conserve energy initially to leave a little gas in the tank so you can end with a serious kick.

Bannister was famous for his incredible surge. And if you look at El Guerrouj’s world record, his last lap was his fastest. Consider also that normally people race not to beat a particular time, but to beat other human beings, so the race is partly about your own physiology, but also partly about psychology. Putting on that burst at the end of a run when everybody else is flagging can really demoralize other runners.

GAZETTE: You’ve written about persistence hunting and the ability of humans to run down faster animals, and even, over a long distance, animals that we think of as being distance runners, like horses and dogs. Are we faster over a mile than animals?

LIEBERMAN: Very few. There are very few animals that humans can beat over a mile, although keep in mind that these pronouncements don’t come from actual races. Instead, researchers have clocked the maximum speeds of various animals by chasing them in cars or affixing sensors to their bodies when they are hunting or being hunted. Most animals sprint for only short distances, and it’s hard to know just how long and how far they can keep those speeds up.

GAZETTE: You’re not going to outrun a cheetah for a mile?

LIEBERMAN: There are examples of people who do run down a cheetah, but only over long distances. A few years ago some Kenyan farmers got really irritated by two cheetahs that were eating their goats, so they ran them down by chasing them for six kilometers. The cheetahs obviously could run many times faster than these guys, but we can outrun the cheetah easily over a few kilometers. That’s true for a lot of other animals too. I myself even recently participated in a man-against-horse marathon.

GAZETTE: How did that go?

LIEBERMAN: Every year they have a race in Arizona called Man Against Horse, which, as you can imagine, started in a bar.

So two years ago, I decided I had to put my money where my mouth is and run it. It’s a marathon over a mountain. I’m not a great runner by any stretch of the imagination and I’ll never win anything. But it was an amazing experience, although very dispiriting at first as the horses, which were being ridden, quickly outpaced all of the humans in the first few miles.

Then as the sun rose and it got hotter and hotter, we started passing the horses near the top of the mountain around mile 18. Passing those horses was one of the biggest thrills of my running life. I’ve also never felt so competitive. As I was racing those horses toward the end, I had an indescribably primal urge to beat them.

I didn’t run a particularly fast time by human standards, but it was good enough for those hot, tired horses. I think there were 53 horses and I beat all but 13 of them. For me, it was also thrilling to experience physically what I’ve studied and written about, which is that over long distances, humans really can outrun the premier running animal on the planet, the horse. And I’m just an average runner, even if I do like to run marathons. I have no chance to come even close to winning any race ever.

“Passing those horses was one of the biggest thrills of my running life. I’ve also never felt so competitive. As I was racing those horses toward the end, I had an indescribably primal urge to beat them.”

GAZETTE: Are humans, as a species, better runners now than we were back in the evolutionary past?

LIEBERMAN: That is such a hard question to answer because until recently everybody’s job was to be an athlete.

We were hunter-gatherers, and that involved primarily walking a lot, but also climbing, digging, and running. And that running would have involved not just long-distance running but also occasionally sprinting. If you look at the data on hunter-gatherers running when they are hunting, they don’t go particularly fast. They average a 10-minute mile, usually for about half-marathon distances. No doubt when chased by wild animals, they’ll sprint very fast, but I doubt that few if any hunter-gatherers ever ran as fast as Roger Bannister over a mile. For any fit human to run that fast takes extraordinary effort and training, and it was probably never necessary.

That said, as a whole, I would say that humans have always been good athletes. Compared to other animals, we’re not particularly fast, but we have terrific endurance. What’s odd today, however, is that so few of us develop these skills. Most of us are sedentary, and we have largely professionalized athletics. It’s become a form of entertainment. 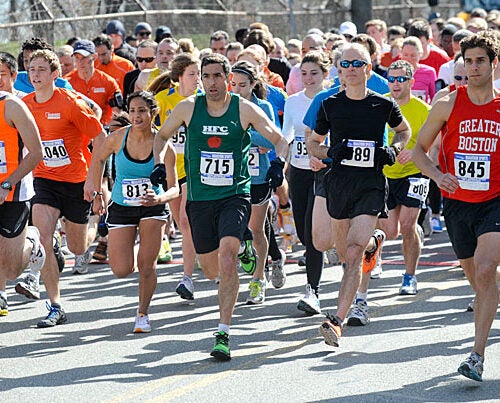 Chasing down a better way to run

Researchers making breakthroughs in learning how and why we run

One result of our modern attitude toward running is that we forget how good just average people can be. If you consider the distribution of running times from any major marathon, there are a few insanely fast people who can run just a little bit slower than two hours, a slightly larger number of ridiculously fast people who can run it less than two hours and 30 minutes, or under three hours, but the vast majority of people can finish in four to six hours. It’s a very, very non-normal distribution, but even average finishers have accomplished something special that few animals can achieve.

We tend to focus on the elites because they’re exciting and impressive, but where would our ancestors have been had they been so silly as to run 26.2 miles for no reason at all? They would have been mostly four- to five-hour finishers.

GAZETTE: Are we evolving as a species to be worse runners? What forces may be at play?

LIEBERMAN: Natural selection only works when there’s heritable variation that affects reproductive success. Since I suspect the ability to run fast has little effect on anyone’s ability to reproduce, I’d expect an absence of selection, hence a gradual increase in variation. An added complication is that running performance is a result of both environment and genes, and it’s the environmental component that is mostly changing. Thus, more of us are not living up to our potential. But that said, there is still a small group of people who really care passionately about running fast, who keep breaking records.