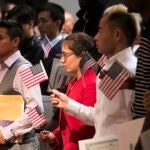 Celebrated by Italian immigrants in the United States since 1792, Columbus Day became a federal holiday in 1937 to commemorate the “arrival of Christopher Columbus in the Americas.” The explorer’s reputation has darkened in recent years as scholars have focused more attention on the killings and other atrocities he committed against Indigenous peoples of the Caribbean. This year, amid a national reckoning on racial injustice, protesters have toppled and beheaded statues of Columbus in various cities, while pressure grows to abolish the national holiday and replace it with one that celebrates the people who populated the Americas long before the explorer “sailed the ocean blue.” The Gazette asked some members of the Harvard community, “Is this the end of Columbus Day, and how can America best replace it?”

In the fourth grade, I came home from school and my dad asked me what I learned. I excitedly told him Mrs. Brennan taught us, “In 1492, Columbus sailed the ocean blue.” As an Oneida citizen and a national leader in American Indian education, I can’t imagine what must have run through his mind, but the next day he drove to my (predominantly white and affluent) school and called an emergency meeting with my teacher. That day, she revised her lesson plan.

For Native people in the U.S., Columbus Day represents a celebration of genocide and dispossession. The irony is that Columbus didn’t discover anything. Not only was he lost, thinking he had landed in India, but there is significant evidence of trans-oceanic contact prior to 1492. The day celebrates a fictionalized and sanitized version of colonialism, whitewashing generations of brutality that many Europeans brought to these shores.

In cities across the country there is a growing awareness of our collective and violent history — and of the legacies that reverberate in our justice, health, and educational systems. Statues of Christopher Columbus are crashing down and calls to replace Columbus Day with Indigenous Peoples’ Day ring out. For me, it is not as simple as replacing one vacation day on the calendar with another. If these calls are sincere, any change to Indigenous Peoples’ Day must be backed up by action and an active recognition of the continued survival and resilience of Indigenous peoples.

Investment in civics education needs to be made in partnership with tribal nations to teach the true history of the U.S. and to ensure every American knows that today, tribal nations are solving universal challenges and pioneering innovations that can change and enhance the world.

America could learn a lot from its first peoples. But it must start with the truth.

Recent responses to police shootings and killings of unarmed Black people in the U.S. have forced a national reckoning over America’s monstrous racial legacy. One consequence has been a radical rethinking of who we choose to publicly commemorate through statues, monuments, and celebrations. In this light, public observance of Columbus Day must end. For this nation’s over 5 million American Indian, Alaska Native, and Native Hawaiian citizens, Columbus’ voyages to the so-called New World inaugurated a long history of exploitation, enslavement, eradication, and erasure (and he himself initiated and sanctioned such actions).

Thus, to commemorate Columbus is to commemorate European colonization of Indigenous peoples. Instead of recalling and recounting those tawdry tales, let us instead cite and celebrate a most improbable outcome of this history: Indigenous survivance. Stories of Indigenous survival, resilience, and resistance remain in short supply in mainstream America, but not because they do not exist; rather, they have been eclipsed through a nationalist project of Indigenous erasure. We can change this by replacing the October federal holiday with Indigenous Peoples’ Day. The city of Cambridge has already done so, and while Harvard has adopted no formal policy that officially recognizes Columbus Day, neither has it uniformly struck Columbus Day from its academic calendars or formally recognized Indigenous Peoples’ Day on a University-wide basis. The time of reckoning is at hand. Let us demonstrate together our collective solidarity with Indigenous peoples by abandoning public commemoration of Columbus in exchange for celebrating Indigenous survivance.

For Indigenous people in America, the fact that many institutions and governments still recognize Indigenous Peoples’ Day under a different name (Columbus Day) is painful. It is only contributing to the continued erasure of Native peoples. There should be no reason to celebrate a man who only brought disease, genocide, and various assault to Native communities. He shouldn’t be a figure who is upheld in modern society. Quite frankly, he discovered nothing, so what is there to celebrate? America can best replace this day by acknowledging it universally as Indigenous Peoples’ Day. Not only does this holiday allow the country to educate itself on the loaded history surrounding the holiday, it also celebrates the perseverance and power that Native communities continue to have in the world. Far too often, Native people are talked about as a thing of the past, and by designating the day as Indigenous Peoples’ Day, it gives Indigenous people a break from having to constantly defend our existence to society. Not only is it a celebration of our people, it is also a celebration of our culture, our food, and our art.

It’s time for Columbus Day to go away and be replaced by Indigenous Peoples’ Day as a national holiday. That shift would require people to think about the fact that this country was founded on taking over territory that belonged to the Indigenous peoples who are still here and whose ancestors lived here for thousands of years and had their own societies, their own culture, and their own political institutions.

It’s important to acknowledge the Indigenous roots of this country we call the United States. We also have to respect the fact that modern-day Indian tribes in the United States are governments; they have sovereignty; they have land; and we still have the right to independence within the U.S. This is a territory where my ancestors lived, and I appreciate the fact that people in some areas understand they’re living on land that belonged to somebody else and still belongs to them in many ways.

Calling it Indigenous Peoples’ Day would draw attention to a fact that is so overlooked. I have taught Indian law for 12 years at the Harvard Law School, and many students come up to me to say, “We were never taught this in grade school or high school,” or even in college in many instances. They’re amazed to understand how the colonial process worked. I tell my students that this is a very uncomfortable part of U.S. history, a very rotten understory that people don’t like to look at. The Black Lives Matter movement is a great analog because some people want to ignore the fact that police act in ways that are racially discriminatory. In the same way, the majority in the United States prefer not to think about the fact that most of this country was forcibly taken away from the Indigenous populations. It’s something that people like to keep it in the closet or sweep under the rug. The time for a reckoning with the unjust treatment of Native American people is overdue.

Co-president of Natives at Harvard College

There is some hope this year for a recognition of Indigenous Peoples’ Day to replace Columbus Day, primarily because there has been this huge reckoning with race propelled by the Black Lives Matter movement. A lot of changes that are happening now we owe to Black Lives Matter protesters. It has really forced a lot of people in power and a lot of regular American citizens to reckon with the fact that our country has very racist origins and structures in place today.

Given the current situation and what we know about Columbus, we shouldn’t celebrate him. Many people know that Columbus never actually set foot in the U.S. Even celebrating Columbus as the one who discovered America is completely false. It is time to recognize the full and true history of the United States, which was founded on the stealing of Native lands and the deaths and disenfranchisement of Indigenous peoples, who populated North America and the rest of the continent. We’re taught very early, in elementary school, that America’s claim to this continent’s land was entirely legitimate, and that the people who were here were not “civilized” and their societies were not “advanced enough.” This is part of the myth of America, the idea that the settlers deserved this land. But the truth is that Indigenous people were here before the settlers. Having a day to commemorate them would be a big step in recognizing the contributions of Indigenous people to this country’s history.

Even if Columbus Day were to reach its end in name, the things it represents— the doctrine of discovery, manifest destiny, etc. — are foundational to the myth that is America. The specter of Columbus will not be exorcised so easily from the land. But that doesn’t make the move to rename this day Indigenous Peoples’ Day meaningless. With each year I’ve been moved by the grace and dignity that we, as Indigenous people, have given ourselves on that day.

After centuries of the United States and Canadian governments attempting to make our culture, lives, and sovereignty illegible or nonexistent, we are still able to find one another wherever we go. I have been heartened too by the non-Indigenous people who have joined us in celebration, reflection, and reckoning with the difficult histories of colonialism and genocide. If we are to heal, to find a way to live here together, these processes are indispensable. While renaming Columbus Day to honor Indigenous peoples will not do this alone, I believe it has created a new space to allow for such connections and work to begin. 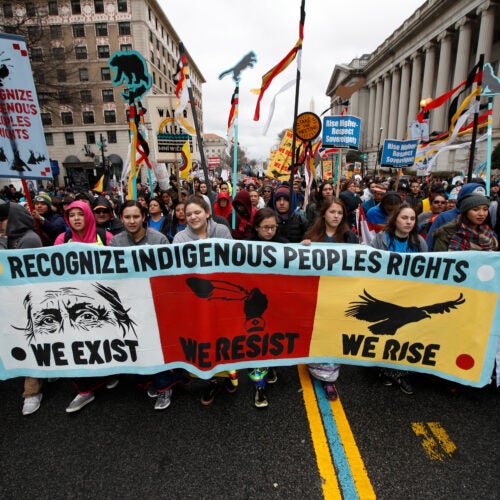