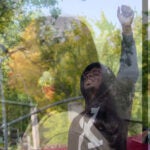 After a white police officer killed George Floyd on May 25, millions across the world took to the streets, to the airwaves, and to social media to protest police violence against Black Americans. It could have been just the latest instance of violent treatment of Americans of color by white authorities, but instead Floyd’s death galvanized nationwide movements that five months later show little sign of slowing down.

Artists quickly responded to Floyd’s death by commemorating his life. From Nikkolas Smith’s portrait of Floyd that went viral on Instagram, to a mural in the Houston neighborhood where Floyd grew up and similar paintings on walls in cities as far-flung as Barcelona, Spain, Nairobi, Kenya, and Binnish, Syria, to banners trailing planes in cities across America reminding the masses below of Floyd’s last words, artist activists quickly adopted a central role in leading the most recent efforts advocating for racial equity and justice. In Boston, photographer OJ Slaughter documented dozens of the protests that followed with stark, challenging images, depicted in black and white.

In a meeting in the days following Floyd’s death, the members of the Harvard University Committee on the Arts (HUCA), inspired by an idea from Teju Cole, Gore Vidal Professor of the Practice of Creative Writing, Faculty of Arts and Sciences, decided to act quickly to recognize artists who were already engaged in the critical work of exploring themes of racial justice.

“Amid all that was happening in the world, we wanted to find a way to signal our appreciation of, and respect for, the wide variety of work that was being done. The idea was to provide instantaneous relief funds to certain artists that were recognized by members of the committee for doing that work,” said Cole. “And more than providing this modest grant, we wanted to signal to the artists that further engagement with them at Harvard — bringing their work into conversation with our students — was what we were thinking about.”

“The opportunity for ongoing collaboration is really key to the project,” said Dean of Arts and Humanities and co-chair of HUCA Robin Kelsey. “This initiative was open-ended by design. We wanted this to be very much about seeding possibilities, both in terms of these artists and their practices in the world, but also in terms of possible collaborations among these artists, as well as possible engagements between these artists and Harvard. We wanted these possibilities to emerge organically. And already, there’ve been a number of possibilities that are being cultivated.”

At Harvard Business School, Sebastian S. Kresge Professor of Marketing Rohit Deshpande is working closely with Gupta, the founder of Street Symphony, an organization that has presented nearly 400 free, world-class musical engagements for severely disenfranchised communities affected by homelessness and incarceration in Los Angeles County. Deshpande has created a multimedia case study on Street Symphony and will teach it in his “Arts and Cultural Entrepreneurship Class” in spring 2021. Gupta and members of the Street Symphony team have been invited to join the class as guests.

“The act of protest has so many different forms. … Do your part. No one should want to come out of this feeling like they could have done more.”
— OJ Slaughter

Malkit Shoshan, lecturer in architecture and area head of the Art, Design, and the Public Domain MDes Area Group, also invited the artist she nominated to visit her course. Vega joined recent Loeb fellow De Nichols in a lecture and conversation on social, civic, and racial justice in the United States for Shoshan’s “Forms of Assembly” class on Sept. 30. And the Harvard Art Museums will host a conversation with Cook and Makeda Best, Richard L. Menschel Curator of Photography, later this month as part of its Art Study Center Seminars at Home series.

Collaboration with other grant winners are in the planning stages.

Slaughter is an artist affiliated with the ArtLab in Allston, and from Aug. 31 to Sept. 4 took over the ArtLab’s Instagram account. This was a natural connection: Slaughter’s work is intrinsically tied to Boston, social media, and the current moment.

Bree Edwards, the ArtLab director who nominated Slaughter for the HUCA grant, was first introduced to them at The ARTery 25 — Millennials Of Color Impacting Boston Arts And Culture event in 2019, where Slaughter was the creative director. Deeply impressed with their vision, Edwards invited Slaughter for a residency, and to be a part of the ArtLab’s grand opening shortly thereafter.

“OJ has a unique ability to interact with their subjects, and to create portraits that more authentically portray who people are,” Edwards said. “Over the past few months, I have been watching how they have been photographing and documenting the recent protests following the death of George Floyd, from a Black perspective, and for a Black perspective, and to me that is very powerful.”

Slaughter photographs law enforcement and protestors alike. “I hope that the images I take inspire people to take action in their own way,” they said. “The act of protest has so many different forms. If you are on the street? Good. If you cannot go outside but can correct racist family members at dinner or on Facebook? Good. Do your part. No one should want to come out of this feeling like they could have done more.”

Pitts said he learned he’d receive the HUCA award “during the time when we were all processing the recent murder of George Floyd and many others; I couldn’t get out of bed. After speaking with Jill Johnson [dance director of the Harvard Dance Center, who nominated him] and some others, I remember riding my bike fast uphill.”

One of Pitts’ recent projects provides a reminder that, even as the struggle for racial justice continues to swell worldwide, we are all also engulfed in the COVID-19 pandemic. His short film, “Lake of RED,” explores themes of solitude, fragmentation, repetition, disturbance, and euphoria. Post-production on “Lake of RED” was completed during the pandemic.

Johnson is unsurprised by Pitts’ ability to create lasting work during the most difficult times, saying that she sees Cornel West’s concept of catastrophic consciousness in his dancing — a response to a cultural issue, such as racism, with a unique creativity and compassion that transforms.

“I see in in Shamel’s work a beauty and a kindness — an attentiveness that is so unbelievably humanizing,” she said. “His work bears poignant witness to the dehumanizing dis-integration of bodies that occurs in discrimination, racism, and the insidious mechanisms of white supremacy.”

Pitts, who taught a class with Johnson in the past and plans to return to campus in the near future, whether remotely or in person, looks forward to ongoing collaborations with Harvard, and with the other artists recognized by the HUCA initiative.

“To be seen amongst such esteemed artists, who are all working toward racial equity and dealing with the realities of our time, is of huge matter to me,” he said. “It propels me and energizes me with necessary fuel to continue the work.”

“It is a huge honor to be a part of this list,” Slaughter said. “I am so thankful for my time spent with the Harvard Art Lab and the generosity of this community. I hope to continue to make work that makes my people proud. I hope the work lives far past my lifetime and educates people for years to come.” 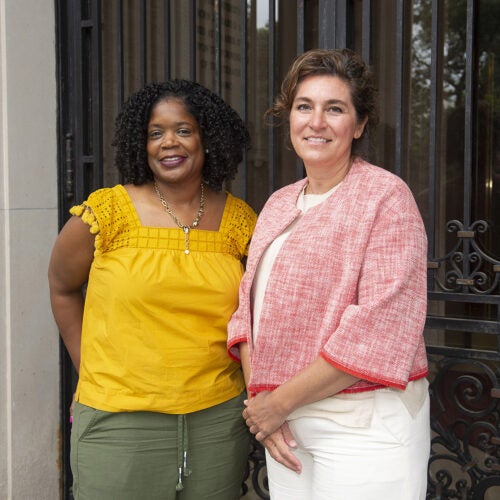 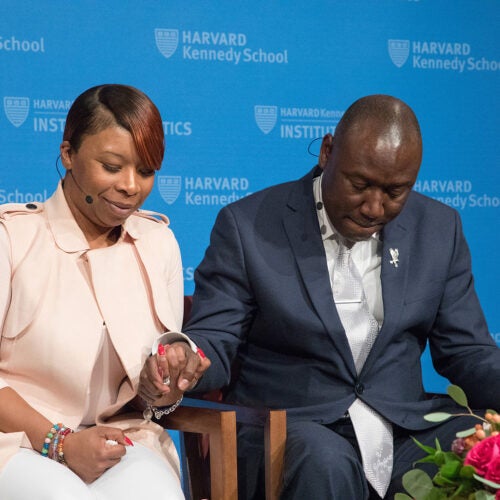 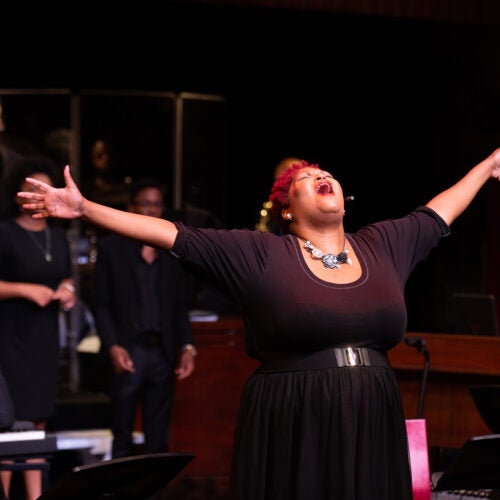 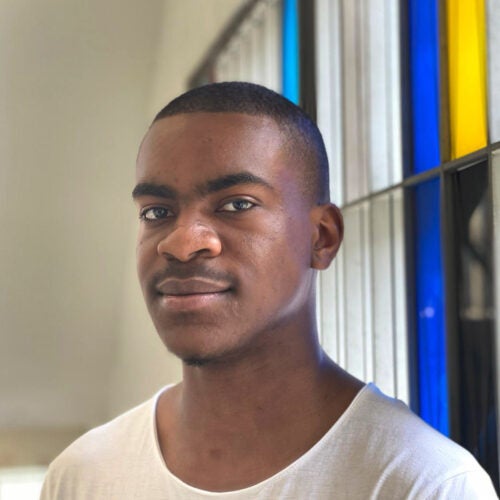 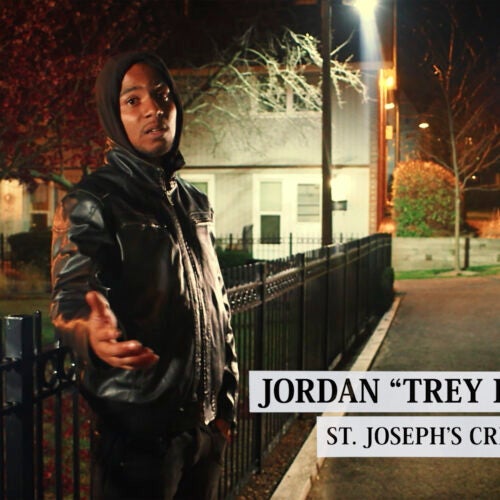